Russell Ger is the newly appointed music director for Orchestra 914, which will perform a holiday concert at the Paramount Hudson Valley Theater in Peekskill on Thursday (Dec. 2). Ger is also music director for the Greater Newburgh Symphony Orchestra. 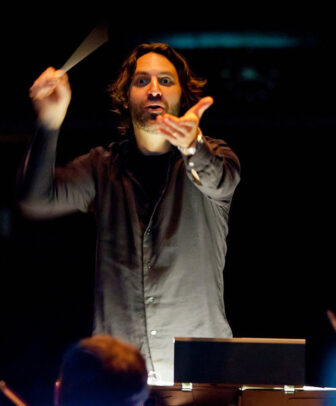 Is it typical for conductors to work with more than one orchestra?

It’s the norm for conductors of every stripe, because different ensembles give you different players and programs. For instance, Yannick Nézet-Séguin is the music director of the Metropolitan Opera and the Philadelphia Orchestra. Gustavo Dudamel leads the Los Angeles Philharmonic and also the Paris Opera. The orchestras are certainly not in competition with each other; they enrich each other.

What factors are involved in putting a program together?

Major orchestras have artistic committees that collaborate with the music director on putting together a season. With my orchestras, it’s entirely my work. The old, inherited model of an overture, a concerto and a symphony is not illuminating or exciting. I enjoy finding pieces that coalesce around a theme. For instance, Orchestra 914 is doing a program in March of music by Latin American composers. A good program should be like a menu in which everything should be satisfying for both the players and the audience at the end of a meal.

How do you establish trust when working with a new orchestra?

The best you can do is come prepared. A lot of conductors suffer from impostor syndrome. I worked with one who turned into a sweaty, hand-wringing mess before every concert, saying, “I shouldn’t be doing this.” By acknowledging you’re working with great masterworks of human creation, and that you have respect for them, you’re the composer’s advocate. You have to convince both experts, the players and the audience that you have the right to dictate the direction of the experience. You’re a conduit, a conductor, the vehicle in which to conduct the energy. Being open and honest with the ensemble — that’s how you make a successful relationship.

How did you morph from musician to conductor?

I played the tuba in my high school orchestra [in Australia]. The tuba provides a harmonic foundation but is not a particularly interesting part to play. I spent an enormous amount of time sitting and observing, engaged in the activity of watching the conductor rehearse. I was always jealous of not having something to play. I was also a pianist in the school jazz band and a vocalist in vocal ensemble. At home, I was a composer, writing string quartets and pop songs. The conductor of my high school orchestra noticed all these things when he was asked for recommendations by an American teacher who was launching an immersive conductor training program, and he recommended me. Conductors have all types of personalities; some are gregarious, some withdrawn. I’m on the gregarious side. My teacher recognized that in me, and encouraged me to apply it, refine it and develop all of these things.

Is there a typical career path for composers?

There’s no linear progression. So, if you asked where I see myself in 10 years, I can’t answer. I just turned 40, and for a conductor I’m still young. It takes an enormously long time to get good at this. I’m skeptical of wunderkinds: How much gravitas and life experience can they bring? Or is it just tons of energy? The longer I’m at it, I see an image of the aged maestro because of the number of skills you have to have, not just as a conductor but as a human being. For now, I’m looking forward to bringing Orchestra 914 into the public consciousness this year and, through that, bringing in a new group of people by stripping away some of the fussier and stuffy elements of attending an orchestral concert. I’m excited about introducing people to a new way of experiencing this music.