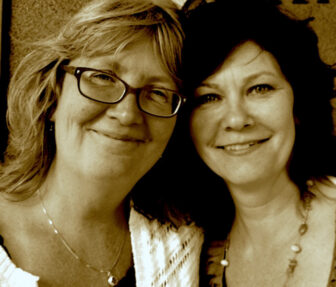 The snowy cold of December will be a perfect backdrop for Northern Lights, a new play that reimagines three classic fairy tales in a contemporary setting centered on a teenager who has lost a parent to the pandemic.

Co-written by Mona Z. Smith, who lives in Cold Spring, and her longtime writing partner, Traci Burwitz Mariano, who is based in Los Angeles, the play will be produced as a free staged reading, replete with an array of live Foley sound effects, on Dec. 11 and 12 at the Paramount Hudson Valley Theater in Peekskill.

The cast includes many actors who live in the Highlands, including Kurt Rhoads, Nance Williamson, Malachy Cleary, Samuel Bates and Sasha Lee Andrews of Philipstown; Dante deLeo of Newburgh; and Marisa Lowe of Beacon. It will be directed by Alice Jankell of Putnam Valley.

The storyline is based on Hans Christian Andersen’s “The Tinderbox,” “The Wild Swans” and “The Steadfast Tin Soldier,” all published in the 1830s, plus what Smith says is “a wee bit of ‘The Little Match Girl,’ although our play ends on a very hopeful note.”

Smith says that “adapting another person’s work means asking yourself, ‘How do we honor them, while retelling their story? This all started by being inspired by the Andersen stories, which are about trying to belong; Andersen himself struggled with feeling like an outsider.”

The play was developed in workshops held over two years. In the earliest version, which was commissioned by the Hudson Valley Shakespeare Festival, “we had a month to work on it, but we knew at the end” that it needed more. “I had a bunch of notes on the script with things to address,” Smith says.

Abigail Adams, who was then working at HVSF, was an early booster. When she moved on to Paramount Hudson Valley Arts, she urged the playwrights to take another look at the script. She also received a development grant from Arts Westchester. In February 2020, the writers held a workshop with actors at the Hudson Valley Performing Arts Laboratory in Poughkeepsie. “It was loose and very helpful,” Mariano recalls.

A month later, COVID-19 restrictions put a halt to anything theatrical, but the two writers continued to work together remotely. “Before the workshop, we were going in a different direction,” Mariano says. “When we began working with the actors, we were looking at a person who was experiencing homelessness. We decided to make it less about her actual circumstances.”

What are Foley Effects? 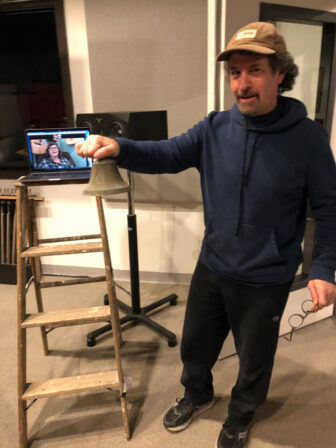 Alice Jankell, the director of Northern Lights, says that “sound” is her eighth character.

It will be provided by Les Bloome, the owner of Alchemy Post Sound in Peekskill, a “Foley artist” who recreates everyday sounds in production for feature films, television and theatrical performances. For Northern Lights, Bloome will create sound effects on the spot.

“Everyone will leave with a greater appreciation of sound,” Jankell says. “Les starts from the emotion of the story and uses sound as a mobile arc. It’s wild — he’s doing huge Hollywood movies, then he stops work at 6 p.m. to work with us.”

Smith explains: “Home was more of a literal idea when we started, but now it’s a sense of what it feels like to be home, where you have landed. The experiences of the pandemic have informed the journey of our main character. There was no way the feelings and situations of this period couldn’t seep into our minds.

“We wound up taking the stories, which have a meaning to our girl as part of a family tradition, but making them become much bigger than a 19th-century voice. This was important partly because we wanted to develop work where people [in the audience] can see themselves onstage. Hans Christian Andersen is never acknowledged, but our teenage character is trying to find out what the stories mean to her now. She begins to fill in the blanks, to put herself into the stories.”

Jankell, who became involved in the project more recently, says there’s “nothing I like more than developing a piece — wrapping my arms around it and wrestling it down.” She sees this play as being “all about stories being passed down. Stories have an elasticity which offers ways to soothe and heal, and we need to give ourselves permission to receive them.”

Northern Lights will be performed at 8 p.m. on Saturday (Dec. 11) and at 2 p.m. on Sunday (Dec. 12) at the Paramount Hudson Valley Theater, 1008 Brown St., in Peekskill. Tickets are free and can be reserved by emailing your full name, the show date and the number of tickets to [email protected] A talk back will follow the Saturday performance and a demonstration of Foley sound effects will follow the Sunday matinee. Masks and full vaccination or a recent negative COVID-19 test are required of adults.