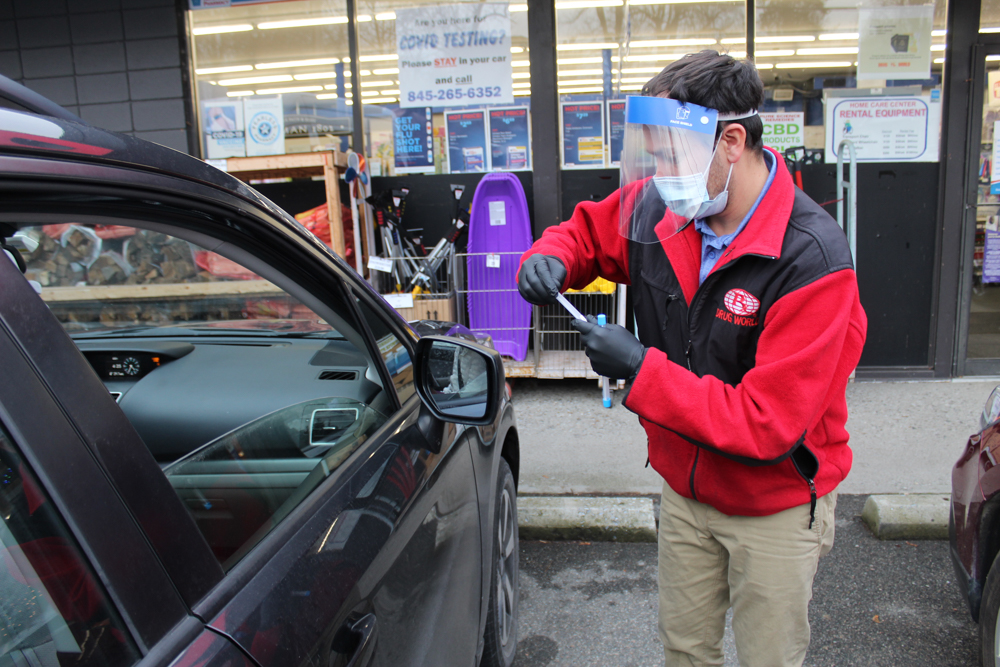 Mark Snyder, the co-owner of Drug World in Cold Spring, prepares a swab on Tuesday (Dec. 28) for a customer getting tested for COVID-19. (Photo by L. Sparks)

With hours to go before a Christmas Eve get-together with friends, Gregg Zuman parked himself in a long line of other people anxious to get rapid COVID-19 tests at a clinic near Penn Station in Manhattan.

It was the Beacon resident’s third attempt that day to get the negative test result he needed to attend that evening’s gathering and one with relatives in Massachusetts on Christmas Day. It was also his last hope after two days of searching for an appointment for a rapid test or a take-home kit.

Zuman’s under-the-wire experience is now the norm. A surge in demand for testing that began months ago, and accelerated with the rise of the Omicron variant of the virus, is outstripping the availability of home kits and putting pressure on the pharmacies and clinics that provide rapid tests and the more-rigorous polymerase chain reaction (PCR) tests. 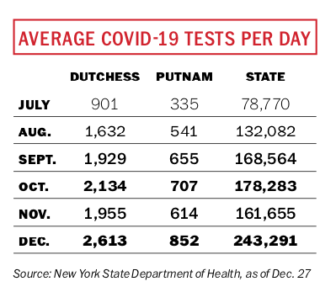 As of Dec. 25, an average of 2,600 people in Dutchess County were getting tested daily this month, nearly three times higher than in July, which began with COVID-19 having cratered and the state scaling back on testing in favor of promoting vaccinations. The daily average in Putnam County, 852, is more than double from July.

Hours before getting in line at Penn Station, Zuman had tried a clinic near Grand Central Station but gave up after the line he estimates was 50 feet long moved only a few feet in 90 minutes. That morning a clinic in Poughkeepsie showed an appointment at noon, but Zuman says he got a text message after registering online that said the clinic was booked.

The day before Christmas Eve, he stopped at Rite-Aid in Beacon and was told the store had sold its 150 home kits in an hour. On Dec. 22, he saw a social media post about home kits being distributed at the Beacon police department; Chris White, the city administrator, said the allotment of 250 kits was gone in three hours.

Drug World in Cold Spring used to have one appointment every 13 minutes for its rapid tests, which show results in 30 minutes to an hour. Now the pharmacy has four in the same time period, co-owner Heidi Snyder said on Tuesday (Dec. 28).

“Never, ever have we been booked like this,” she said.

On Dec. 20, Drug World sold its 200 at-home tests within 45 minutes and the phones are “ringing nonstop” with people looking for more, said Snyder. The federal government has been buying up available at-home kits to fulfill President Joe Biden’s vow to distribute 500 million of the tests for free, starting in January, making the kits “almost impossible to get” for Drug World, she said.

“It makes me very sad because we should have what we need in our community,” said Snyder.

Where to Get Tested

Faced with the overwhelming demand for tests, New York State has been expanding its number of testing sites. Gov. Kathy Hochul’s administration also said on Monday that it was distributing 3 million at-home kits this week to school districts, with 2 million to New York City.

Jackie Bray, commissioner for the state Division of Homeland Security and Emergency Services, said there will be “rolling deliveries every week, every other week, to all of our counties, both to our school districts, but also to communities.”

Eric Vathke of Cold Spring is hoping he can get a PCR test in time for a family trip on Thursday (Jan. 6) to St. Thomas. He needs a negative test within five days of leaving, but is concerned about a delay in processing tests because of the overwhelming demand.

While COVID-19 tests are typically free, Vathke is considering using one of the companies that promises quick results for a fee.