■The Garrison school board voted 7-0 to create an equity, diversity and inclusion committee and appointed board members Jocelyn Apicello, Matthew Speiser and Courtney McCarthy. (July 13)
■Following discussion, the board set aside a proposal to install four electric-vehicle charging stations. (July 13)
■The district agreed to pay Cecilia Rohrs of Visual Touch Media to film its meetings for $400 apiece. (July 13)
■The board amended its May 2020 employment agreement with Superintendent Carl Albano to increase his base salary for 2021-22 to $215,000, which it said was “more in line with our neighboring districts” and in recognition to his service as interim principal and business administrator between hires and leading the school through the pandemic. When he was hired in 2020, Albano earned $198,000. The board also extended his contract by a year, to June 30, 2024. (July 13)
■ The board introduced a resolution for emergency repairs to the roof of the school, which “has deteriorated beyond repair, is leaking, has the potential for mold growth, and must be replaced.” A state law allows contracts for emergency work to be awarded without competitive bidding. (July 13)
■ The board accepted a $241,339 bid from Edutek to install new phone, security camera and public address systems and door access controls. (July 13)
■ The board signed a contract with Orange County Transit to provide bus transportation during 2021-22 for $619,510. In the event of a pandemic shutdown, the district can suspend or cancel service with 10 days’ notice. (Aug. 25)
■ The board approved a resolution allowing board members to attend in-person meetings by videoconference if they provide “reasonable justification.” (Aug. 25) At the next meeting, on Sept. 2, two board members attended by videoconference.
■Albano noted that planning for COVID-19 testing was underway to meet a state mandate that school employees be tested weekly if they cannot show proof of vaccination. (Sept. 2)
■ The board accepted a donation to the district from Richard and Peggy Neill of Garrison of a professional-grade science microscope. (Oct. 6)
■ Evan Maasik, a former Garrison School student who is now a senior at O’Neill High School, spoke about the storage locker he constructed for the school garden for his Eagle Scout project. (Oct. 20) 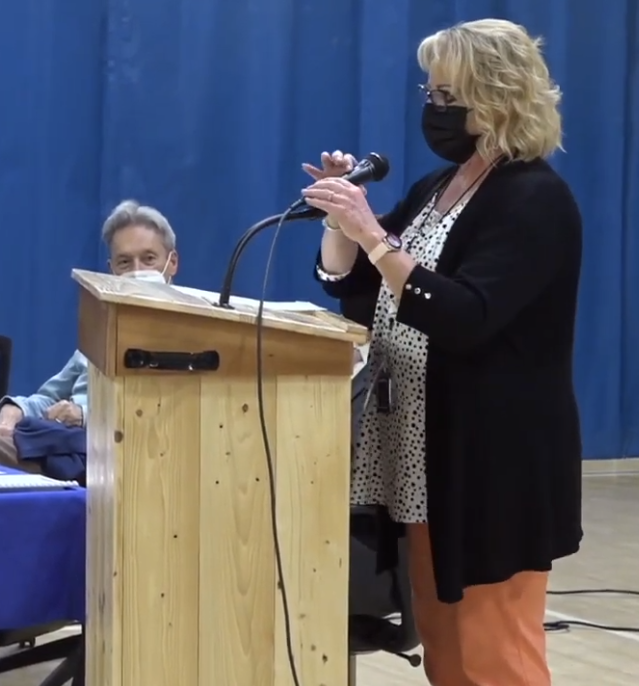 Dusti Callo unveils a podium she made for the Garrison School from wood reclaimed during hallway renovations.

■ Dusti Callo, the secretary to the superintendent and a woodworker, pulled the coat hooks, nails, staples and screws from scrap lumber that had been removed from the school hallways during renovations and built a podium she presented to the district. See video below. (Oct. 20)
■ The board accepted a donation from James Sears of two temperature, humidity and barometric pressure smart sensors and a WiFi gateway. (Oct. 20)
■ The board created a communications task force and appointed Member David Gelber as chair. (Nov. 17)
■ Linda Speziale was appointed as the middle-school chorus teacher through an artist-in-residence program administered by BOCES. (Dec. 1)
■Following a school shooting in Oxford, Michigan, on Nov. 30 that killed four high school students, board members discussed gun safety, mental health, security issues and lobbying state legislators for laws to prevent children from accessing weapons. (Dec. 15)
■ Albano reported that 99 percent of the staff was vaccinated and 100 percent of those who work with students. In addition, 50 percent of students at the elementary level and 66 percent of those in grades 7 and 8 were vaccinated. (Dec. 15)
■ The new diversity and inclusion committee said it was planning training sessions in the spring for teachers. (Dec. 15)
■ The board heard an update on the progress of a $9.9 million capital project approved by voters in September 2019; over the past few months, it had approved $289,000 in additions to contracts based on recommendations from the architect, contractor or administrators. Renovations are scheduled to be completed before the start of the 2022-23 school year. (Dec. 15)
■ Michael Twardy, director of facilities and transportation, announced that he plans to retire on Feb. 28. (Dec. 15)
■ The Garrison School only goes through the eighth grade, and many of its graduates attend O’Neill High School, which is part of the Highland Falls-Fort Montgomery district. Since 40 percent of HFFM students live on base at West Point, the federal government contributes about 10 percent of the district budget as part of a longstanding arrangement that renews every five years. However, last year the Defense Department announced plans to put the contract out for bid, which could lead to drastic cuts if HFFM does not win. A representative for state Sen. James Skoufis said this week that the department has extended the current contract to include 2022-23 but still plans to solicit bids.