In an ideal world, a home should be a respite, a place that provides comfort. During the pandemic, it has taken on even greater importance. But it also can be a place of isolation. 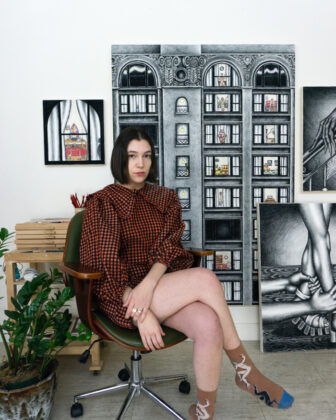 Samantha Rosenwald in front of some of her work (Photo provided)

Samantha Rosenwald addresses this dilemma in a series of drawings with colored pencil that will be exhibited beginning Saturday (Jan. 22) at JDJ/The Ice House in Garrison.

Images in Cellar Door are of apartments and were drawn during the pandemic, soon after Rosenwald ended a troubled relationship.

“They revolve around ideas of isolation, entrapment, danger,” she explains. “When you move into a new place, especially with a newish person, you have honeymoon-like ideas of possibility, a new chapter. We moved in together before the whole idea of the pandemic was on our minds, and gradually it became something else. Once you have to be locked somewhere, it has a whole new set of connotations, and previous ideas get thrown out the window.”

The apartment building, in downtown Los Angeles, where Rosenwald is based, is not the building in which she lives but one she can see from her place. “It’s semi-Corinthian, architecturally, at the top, and then super-basic, very modern throughout,” she says. “Each window takes up the entire wall; it’s a classic downtown loft building.” 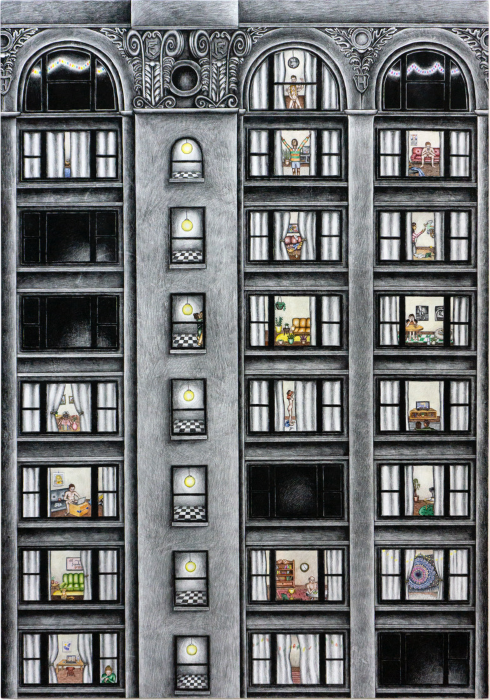 “Hell is Other People” is the centerpiece of the exhibit.

With the exterior acting as a frame, most of the panels depict what Rosenwald envisioned going on within each unit. A narrative, which can be followed in any direction, highlights the residents and their fears.

“The apartment is a way of paying attention to people’s ways of being alone with themselves; feeling trapped within oneself, being surrounded by things like a rat in a cage; how horrible and dark it is to be alive,” she says. “It’s definitely a catharsis. The premise behind therapy is to acknowledge the pain you’ve been through. It’s a way of wading through the bad, to an awareness.

“I hope people looking at it will say, ‘Yup, this has been a hard time,’ but through sharing we can all realize we’ve been going through the same thing,” she says. “Plus, seeing the absurdity of it all can be healing. In acknowledging the bad, we’re able to come at it from a vantage point of absurdity or comedy or, at the very least, self-awareness, all of which are better than being mired in despair.”

Rosenwald says the series is more specific than much of her work. “There are more references to cultural vernaculars and to people in my life,” she says. “I love the idea that it can be read as a real-life comic strip. There is a loose narrative people can interpret; it can be pieced together with all the little Easter eggs I placed. It has a monochromatic, film noir/horror story color palette, which is a shift but also links to my earlier themes and motifs, so it feels like a different chapter of the same book.”

Growing up in Los Angeles, Rosenwald, who is 27, didn’t plan on becoming a professional artist. But she always loved art and especially colored pencils. “They can make a frenzied mark or a textured mark and can be a subtle way of pointing to anxieties,” she explains.

She came east to attend Vassar College in Poughkeepsie, where she majored in art history. She then earned an MFA at the California College of the Arts in San Francisco. She has had recent solo shows in London, Brussels and New York City. “It’s been a pretty good period for my career, but it is also a little strange experiencing success at a low point of world history,” she says.