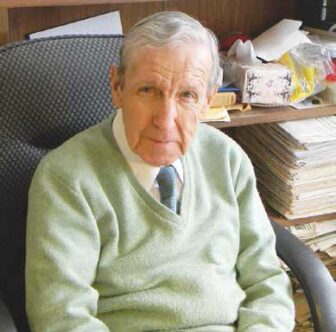 Don Hall, 91, of Lake Carmel, the longtime publisher of The Putnam County Times, died on Jan. 30 at the Putnam Hospital Center in Carmel.

“If you knew Don Hall, odds are you were either awed or aggravated by him. Inspired or insulted. Very few people walked away from him indifferent,” Editor Holly Crocco wrote in the paper’s Feb. 2 issue.

After a few months, Hall quit his job at the H.J. Heinz Co. and began taking journalism classes at New York and Fordham universities, Crocco recounted. In 1961 he opened his own printing plant at the former New England House Hotel in Brewster. After it burned down on Feb. 2, 1971, he moved the newspaper offices to Mahopac.

“Until recent years when he (finally) got help with distribution, he was the sweet little old man you could find stocking the newspaper stands at ShopRite, and other locations throughout the county, three times a week — happily handing out papers to passersby,” Crocco wrote. “He had dollar coins that he enjoyed doling out to kids for no reason at all. He was a self-proclaimed ‘Eisenhower Republican’ who was fiercely loyal to those who showed support for his newspaper.

“Hall was equally as passionate about knocking down anyone who stood in the way of his success as a small business owner, with his most notable opponent being the late Fox News chief Roger Ailes, who owned a competing newspaper [The Putnam County Courier] and with whom Hall sparred frequently until Ailes sold his newspapers and moved south. Ailes died in 2017.

“Hall spoke his mind, even when his opinion was an unpopular one. He could be rough around the edges and unrelenting once he had his mind set on something. But he was a hard worker. Determined, motivated and — especially in his later years — downright unbelievable.

“Right up until the last few weeks of his life, he drove himself to work, was almost always dressed in slacks and a tie, and always clean shaven.”