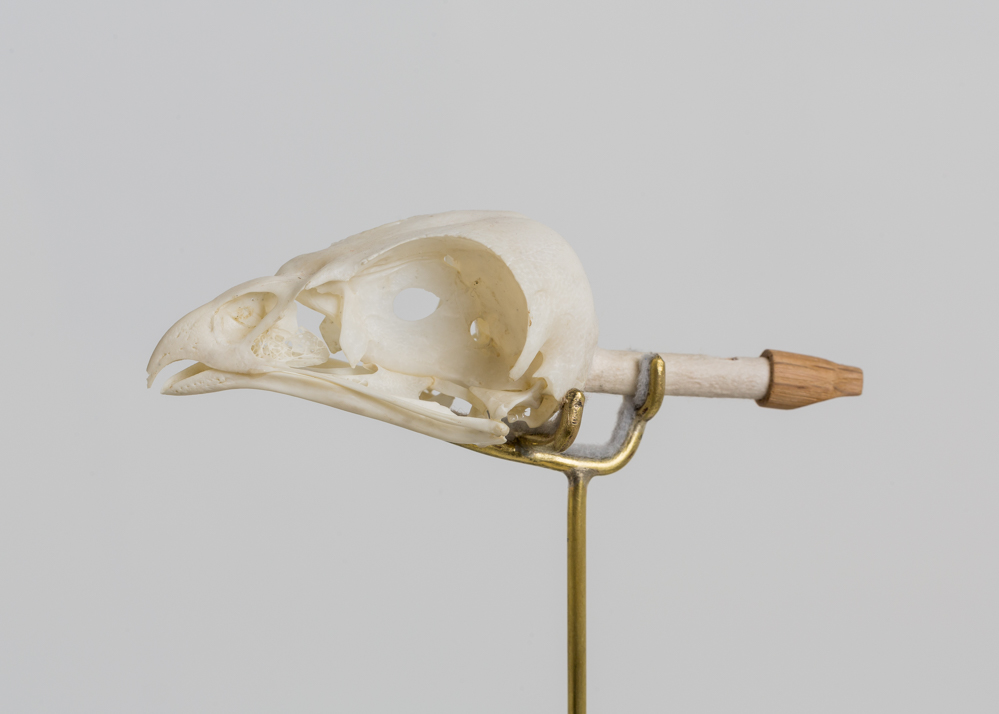 If nothing else, Kazumi Tanaka’s sculptures prompt a double take.

The longtime Beacon resident creates musical instruments with animal skulls. She also incorporates seashells, wood and her own hair. 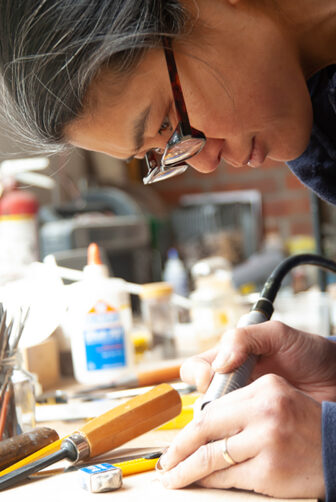 Kazumi Tanaka in her studio (Photo by Ronnie Farley)

Beyond Silence, an exhibit of Tanaka’s instruments, along with paintings done with indigo ink, will open at Fridman Gallery Beacon on Feb. 19 with a reception from 4 to 8 p.m. An artist’s talk will follow on March 12 with music played on one of the instruments by Sara Milonovich, who also lives in Beacon.

Tanaka, who was born in Osaka, Japan, began making the instruments after finding the skeletal remains of a groundhog in her backyard. She took the skull with her to a residency at an artists’ retreat, McDowell, in Peterborough, New Hampshire.

“I was looking at the shape, and I started to see a guitar,” she recalls. She plays piano and had been pondering how she could collaborate with her many friends who were musicians. This seemed to fit.

The challenge was making a guitar from a skull. So she reached out through friends to two electronic music professors at Cornell University. “They told me to use certain materials and gave me a lot of other information,” she says. “They also sent me a thin cable to insert into the object, which solved a huge technical problem.”

Tanaka continued by making stringed instruments and “flutes out of bones, and a buzzard whistle,” she says. That led to a small show in 2016.

In 2021, Tanaka was invited to do a residency in Salem, Germany, at L wie Materie, a space in the countryside near the Swiss border.

“I spent a month living in a beautiful cottage,” she says. “The project [which she titled Messenger Y] started way before I got there, when the two people who run it, Johanna Knöpfle and Matthias Schenkl, agreed to my idea of collecting animal skulls in the region and keeping a record of where each was found. Finally, they took photos, two of which are included in this show.

“While I was there we collected more and were heavily involved in cleaning the skulls so I could work with them,” she says. “I wanted to get to know each species and animal. For me, in creating the instrument, I encounter each animal’s remains, then I go home and study and learn about them, and slowly transform them into functional musical instruments.

“Over the course of years, as people have come to realize what I do, they’ve given me animal remains. I live with them, get to know them. The new sounds and meanings continue beyond the animal’s death. If I’m having a hard time for some reason, it makes me feel better. I feel there’s a healing power to this project.”

She says that when drivers see roadkill, “we don’t think twice of it, but it happens everywhere and can be transferred in a way to what we are going through in this pandemic. We miss spending time together, lots of people have passed away. We often have detachment, which makes me very sad, because we can’t properly mourn. These days I pretty much stay home and work in my studio. It helps me to heal and I hope by sharing people will be regenerated, feel more positive about their lives.”

The Fridman Gallery Beacon, at 475 Main St., is open from 11 a.m. to 6 p.m. from Thursday to Sunday. See fridmangallery.com. Beyond Silence will continue through April 3.