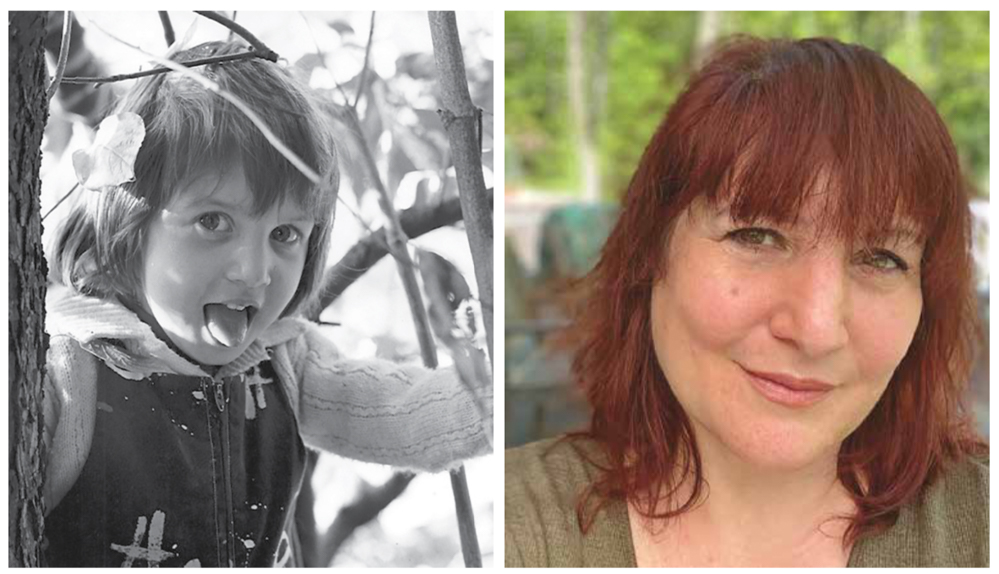 Kalista Sale during the years she lived in two worlds, Greenwich Village and Philipstown — and Sale Parish today. (Photos provided)

Kalista Sale Parrish, who lives on East Mountain Road South, began visiting Philipstown during childhood summers. She teaches drama at the Garrison School and acting at the Philipstown Depot Theatre. She spoke with Alison Rooney.

We lived in Greenwich Village. My mom was an editor of books. She worked at Dutton and G.P. Putnam’s, and she edited Kurt Vonnegut’s last couple of books, and books by Donald Barthelme, Alice Hoffman — a long list of excellent writers. My dad is a nonfiction, political writer. He also spent a couple of years at The New York Times.

My mom found out about this area by reading something in the back of The Village Voice. She refused to go more than two hours from the city.

We were some of the first summer people here. My parents bought this place [where she lives] in 1970. We were here when Cold Spring was a flag stop on the train line and kids put pennies on the tracks. Being a kid in Greenwich Village for most of the year, then coming up here for three months in the summer, was bizarre.

But really, it was the best of both worlds. I loved being able to play Raiders of the Lost Ark with my sister in the woods, catching salamanders. We would make boats out of sticks, leaves and acorns and float them down the stream that ran alongside East Mountain Road South. My mom invited neighborhood kids to come swim in our 70-foot-long, stream-fed cement pool. Eileen Montgomery, a nearby mom, taught me to get over my fear of putting my face in the water. She’d have everyone sing “Happy Birthday” and then “blow out the candles” by blowing bubbles in the water.

I got my Red Cross swimming badges at the Philipstown Day Camp, when it was at Marist Lake in the ’70s, and carried them around like badges of honor that I showed my friends in the city. I remember when we had a party [phone] line and only needed to dial four digits. In many fun ways, it felt like living in the past here.

None of the kids we played with had friends from the city and we’d never met anyone like them, either. We were fascinated by each other. On many an Easter, I would go with the Mackey family to Mass at Our Lady of Loretto, because I loved the pageantry, which reminded me of the theater. At the same time, it was hard to digest my mom thinking she was maybe the first Jewish person who people here had ever met, and that there were no people of color.

In the city, my mom put me in theater class when I was 5. I liked living in the fiction of it. I went to Walden for school — it was progressive education, a way of being able to relate to your work, your teachers, in a way that was not competitive. By then I had some acting jobs: commercials, print work, a cable show hosted by the DJ Meg Griffin.

I loved being a teenager in the city because you get so much independence. Let’s put it this way: There were lots of apartments in which the parents weren’t there. Central Park was across the street from my high school. I did my French homework on the subway in the morning. We didn’t have to rely on a car. There were scary things to deal with, but as city kids with street smarts we were always aware of things around us and places to go if you felt creeped out.

At some point in the mid-’80s a developer came and cut down trees near our Philipstown house. When the development didn’t happen, my parents tore down our cabin and built a house with heat.

I didn’t think I was going to go to college because I was a working actor. But I realized I was no longer eligible for children’s roles. My options were to put on 30 pounds and be the fat best friend or lose 20 pounds and be the ingénue. I was told to get my nose fixed.

I got scared and went to college. I spent two years at New York University, a few blocks from where I grew up.

In high school I had a graduating class of 27. At the Tisch School of the Arts, I was one of 2,000, and it was overwhelming. I dropped out to work as a nanny — I was Alice Hoffman’s summer nanny for five years — and began going to see bands every night.

I met my husband, Michael, in my rock ’n’ roll days. In my early 20s I hung out in the thriving ’90s music scene, and he was in a band with someone I went to high school with. I was 22 when we met, and we’re coming up on 30 years of marriage. I worked for a record company and as the tour manager for his band. We left the city and lived other places: Alabama, Austin, places with the music Michael wanted to play.

We returned to the city when my mom got sick. I finished my degree at The New School, where the students were a bit older, the work ethic was different and I had a clear understanding of why I was there.

After my mother died, my father and his girlfriend lived full time in the house for about seven years, then moved to South Carolina. My sister and I tried to rent it out. Around 2011, Michael and I were faced with a decision: where to bring up our daughter, Corinna, who was 11.

I was still attached to raising a child in the city. I felt I didn’t know how to raise her anyplace else. What do you do raising a kid in the suburbs? Riverside Park and Central Park made much more sense. Still, the city mouse turned into country mouse and we bought out my sister and moved into the house in 2013.

What did Corinna wind up liking the most about living here? Hiking in the woods! She adjusted easily to living in both worlds, actually. In the city, she enjoys being on her own, going to museums, thrift shopping, but she loves it here too.

I started working at the Depot Theatre, which is where I found my people. I began with a program, Stories for the Stage, for little kids [in grades 1 to 4]. We’re in our fifth year — it’s now called the Young Players. It’s amazing watching very young children get engaged, especially because their lives are more performative now. It’s so much about, “It didn’t happen unless you recorded it and showed it to your friends.” We get beyond that.

I love the challenges of teaching drama at the Garrison School. Theater has many elements so useful for everyday life: listening, being in the moment, not prejudging, creating a safe space for others. Theater provides ways of interacting with the world and working in a collaborative medium, understanding how you being responsible for your behavior affects other people. Theater is a great way to express that.

For more information about the next session of Depot Theatre Young Players, see philipstownrecreation.com.