A view of the proposed Breakneck Connector and bridge, at lower right (Photos provided)

Residents weigh in as construction nears

Residents expressed both praise and concern on Wednesday (March 23) about the proposed Hudson Highlands Fjord Trail, a long-planned 7.5-mile pathway between Dockside Park in Cold Spring and Long Dock Park in Beacon aimed at relieving hiker congestion on Route 9D.

More than 50 people filled the boardroom at Philipstown Town Hall to hear a two-hour presentation by Amy Kacala and MJ Martin of Hudson Highlands Fjord Trail Inc., the nonprofit set up to oversee the design and construction and serve as its operator and manager in collaboration with the state parks department.

The first phase of construction, envisioned more than 15 years ago, will begin this fall when work starts on a new station for trail stewards at Breakneck, an overlook and a stone staircase, said Kacala, executive director of HHFT.

Early next year, construction will start on a Breakneck connector and a pedestrian bridge over the Metro-North tracks. The state parks department, which will build the bridge, is overseeing an environmental review of that segment. Construction is expected to be completed in late 2024 or early 2025, said Kacala, adding that the design is 80 percent complete and the permit process underway. 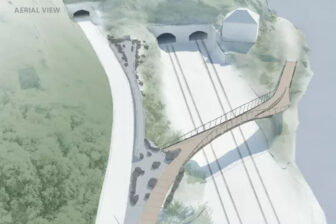 Subsequent phases call for a 2-mile shoreline trail connecting Dockside Park with Little Stony Point to begin in 2024 and be completed in 2027; a pathway through a forested section from Dutchess Manor to Dennings Point; and a trail through marshland from there to Long Dock Park in Beacon.

The project will be accessorized with new parking areas; sidewalks and designated crossings across Route 9D; bathrooms and benches; “trail banks” (widened areas where users can stop to rest); and a shuttle from train stations to the pathway.

The main goal is to ease the congestion and safety problems created by the visitors who flock to Breakneck, parking along a narrow shoulder on 9D and walking in the roadway. Initially envisioned as a single trail, the project has expanded into a multi-use pathway with features designed to give visitors more options than Breakneck.

“There was an understanding that, to deal with the Breakneck issue, we needed to spread and circulate visitation in the area,” said Martin, director of development and community engagement for HHFT. “We were not going to solve the Breakneck problem by just focusing on Breakneck.”

The plan includes “forest nets” that would offer an “immersive forest experience” and native plants.

The plans, which can be found at hudsonfjordtrail.org, also include a parking area for emergency responders, who are frequently called to rescue lost, injured or stranded hikers.

Kacala said HHFT has also been talking with local businesses and educators from the Beacon, Garrison and Haldane school districts about how they would use the trail.

Philipstown Supervisor John Van Tassel said he would like Metro-North to close its Breakneck stop, which is scheduled to open on Memorial Day, until there is access to the trail, but otherwise called it “a great plan” that will “alleviate a lot of problems for first responders.”

Claudio Marzollo, a member of Philipstown’s Recreation Commission, also expressed support, saying that visitors are going to keep coming and “what we have to do is try to figure out how to deal with it.”

“Let’s try to work with the people who are trying to do something,” he said.

A map shows the full length of the trail.

Others attending the meeting shared a range of worries, however.

Ned Rauch, who lives in Garrison, said he is concerned that the plans for the trail are more extensive that what was originally proposed. Kenneth Levine of Nelsonville said he believes the parking plan, which calls for about 400 new spots, will not be enough.

Rebeca Ramirez and Dar Williams, Cold Spring residents who support the project, encouraged HHFT to work with the Philipstown Climate Smart Task Force and Metro-North to encourage more visitors to use public transportation.

“People will come and there’s going to be more cars,” said Ramirez.

Jack Goldstein, chair of the Cold Spring Planning Board, also raised concerns about how the trail’s new concept differs from the original and said that HHFT has failed to consult with Cold Spring officials on the design.

Cold Spring residents will be “profoundly” impacted, said Goldstein. “There are major issues that will need to be put before the public,” he said.

An earlier version of this story said that construction of a Breakneck connector and a pedestrian bridge over the Metro-North tracks is expected to be completed by late 2023 or early 2024. In fact, the expected completion date is late 2024 or early 2025.