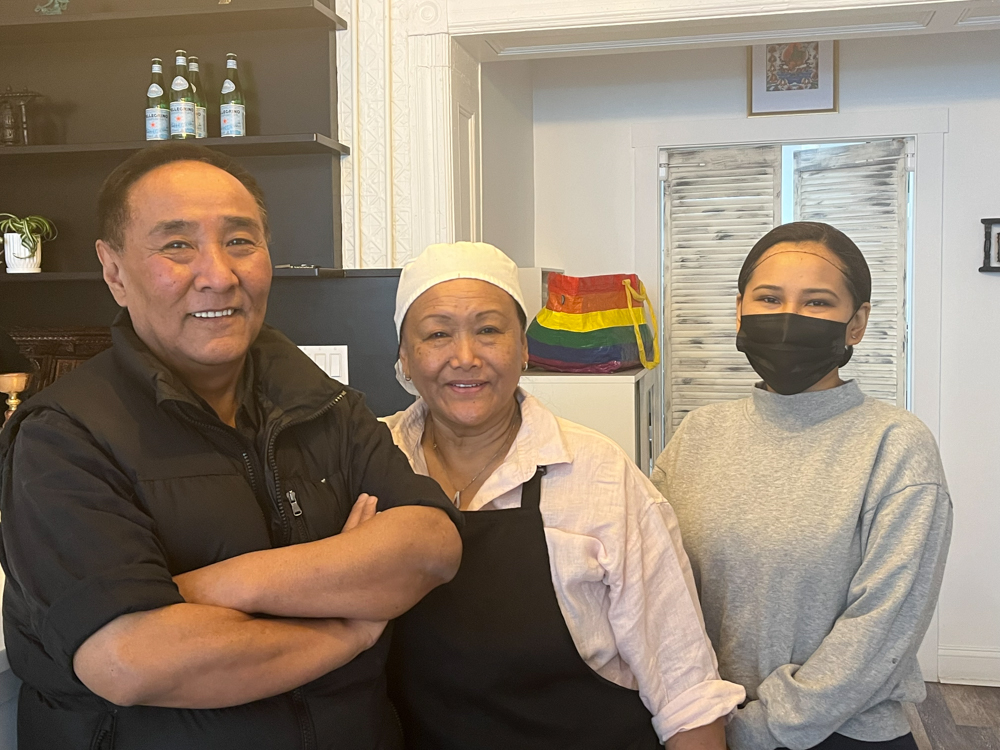 Karma, Yangji and Jyoti Lama at MoMo Valley (Photo by A. Rooney)

You don’t need to be preparing to climb Mount Everest to fuel up on hearty Nepalese fare. Just head over to 455 Main St. in Beacon with your appetite in tow.

There, MoMo Valley serves the dumplings that inspired its name, along with other dishes from Nepal and Tibet, which is often referred to as Sherpa cuisine.

Momos are thought to have originated in Tibet — though there is still some back and forth about it — and then spread to Nepal by traders.

When Jyoti Lama, the proprietor of MoMo Valley, speaks of her mother, Yangji, always cooking back home in Nepal, you might imagine her tending a pot or two at dinner. In fact, Yangji’s family owned a lodge and restaurant where Yangji was the chef. Her range of dishes included American and European favorites such as chocolate cake and apple pie to appeal to climbers heading up Everest via the gateway town of Namche Bazaar.

“My mom met my dad, whose name is Karma, while working there,” Jyoti says. “Growing up I was exposed to so many variations” of food.

Karma and Yangji Lama moved from Nepal to Queens in the early 1990s. They had also lived in Thailand, which explains why there are several Thai items on the menu. (The restaurant in Nepal is now owned by one of Jyoti’s aunts.)

Jyoti followed her parents to the U.S. when she was 12. She remembers the excitement when a Tibetan restaurant opened in the borough. “Now if you go to Jackson Heights, there are tons,” she says.

Jyoti aspired even then to run a restaurant and laid the foundation in 2018 when she took a course on food safety and licensing requirements. The next step was a momo stall at an outdoor flea market in Astoria.

Although Jyoti remembers their first hour in business as being “completely dead,” soon a line formed and they were sold out. They operated the stall through the summer; on the Fourth of July weekend it was so hot they put the momos over dry ice, which helped steam them.

MoMo Valley, at 445 Main St. in Beacon, is open Thursday to Monday from noon to 9 p.m. See momovalley.com or call 845-536-4934. The restaurant serves, along with momos filled with chicken, beef or spinach and cheese, other Himalayan staples such as:

• Thukpa
A grass-fed beef bone broth with egg noodle, topped with seared chicken strips and garnished with scallion and cilantro

A beef stew with vermicelli noodles and black fungus mushrooms, served with jasmine or brown rice

A tangy vegan soup in which a green vegetable is fermented, sundried and prepared with potatoes and tomatoes

The family relocated to the Hudson Valley seven years ago, following Yangji’s cousin, LJ Sherpa, who runs Beacon Natural Market with his wife, Kitty Sherpa. They handed out samples in front of the market every other week to acquaint residents with the food and gauge what they liked.

One change they instituted in Beacon was switching to organic beef, which is supplied by Marbled Meats in Philipstown. They also cook with local ingredients such as cabbage purchased from Beacon Natural Market.

After sampling the food, John-Anthony Gargiulo, the owner of Hudson Valley Brewery, asked them to sell momos there on weekends. Still, they wanted a place of their own, and Kitty suggested the Hudson Valley Food Hall, which was opening on Main Street.

“It was just like what we did at the flea market,” Jyoti says. “This was before the pandemic and all the vendors were excited. For us, it was an opportunity to introduce other food options, more menu items, along with the momos.

“It was so strange; around February, we have a lunar, solar, calendar celebration — similar to the Chinese, but our calendar is different,” she says. “We had a celebratory event [in February 2020], with all the food hall businesses taking part; we gave everyone traditional outfits. Then, by the end of February, everything was shut down. We did mostly takeout and opened slowly with outdoor dining, and it worked out fine.”

Business was so good that after the height of the pandemic they realized they needed more than the 80-square-foot space at the food hall, and LJ Sherpa noted that Joe’s, the longtime Irish pub, was available. Renovating the space was challenging because of supply and labor shortages, but “our family members come through. Sherpa Painting and Construction, my mom’s cousin, helped us turn it into an all-white, clean space that still fit into our budget.”

They opened the airy location, which has a tin ceiling, on Dec. 24 and have been happy to greet many of their customers from the brewery and food hall, as well as members of the Nepalese diaspora who have settled in the Hudson Valley.

“There are lots of Buddhist monasteries around; I remember traveling here [from Queens] every winter, during the lunar, for prayers,” Jyoti says. “There’s one in Wappingers Falls, one in Walden, one in Red Hook. My mom invited the monks from Red Hook to do a blessing.”