Clearly, Anthony Scarrone, the director of Beacon Players, wants equal applause opportunities for the many Beacon High School students working behind the scenes on the drama club performances. That includes Into The Woods, which opens April 29 and showcases the talents of the light, sound, costumes and art crews.

“Theater would be nothing without the behind-the-scenes people,” he says. “What would the Sistine Chapel look like without its ceiling? What would a circus be without clowns dressed in their elaborate outfits? A concert would be in the dark without light, and without a sound crew we would hear nothing, and what would a magician pull out of his hat?” 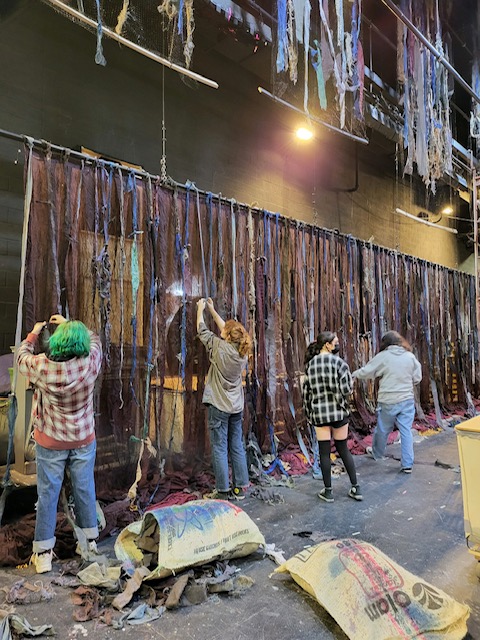 At Beacon Players, these crews are almost like traditional apprenticeships which operate fairly autonomously under the guidance of an adult specialist, but are largely devised and created by the students themselves.

Into the Woods is the late Stephen Sondheim’s — who composed the music and wrote the lyrics — most frequently produced show. It depicts familiar fairy-tale characters such as Little Red Riding Hood, Rapunzel and Cinderella, along with a wolf, a witch, a baker and his wife, and assorted princes who live out their covetous and coveting lives without realizing the consequences of having their wishes and dreams come to fruition.

The musical “subverts all expectations,” says cast member Max Goodhill. “It’s funny yet still heartfelt, with serious themes and subtle comedy.” Another cast member, Zoe Moreno, notes that “there are fun characters that everyone loves” and “the costumes are awesome to look at and the set feels like we are really in the woods.” 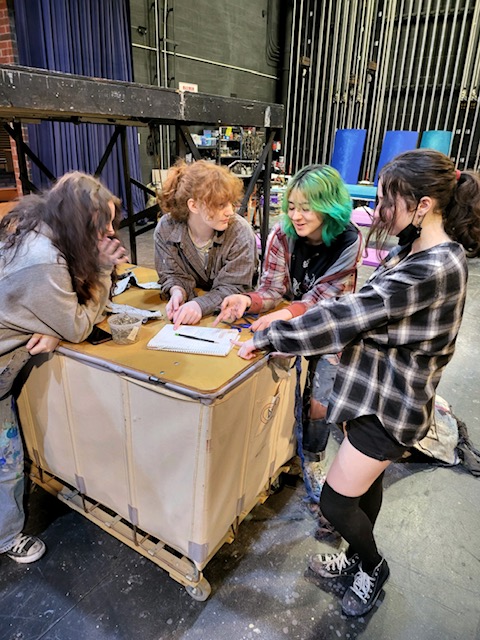 McKible, Nelson-Cheyne, Levy and Hoppe work together to design a tree for the set.

That illusion is largely the work of the art crew, which is responsible for props and painting and decorating the set. It is supervised by Lori Christie, who started out as a parent volunteer and eventually became the art crew adviser. Last year she received the Dutchess County Executive Award for Arts in Education.

(Other parent volunteers include Randy Caruso on sets and sound; Caleb Herrera on lights; Nicole Paoli and Rebecca Mensch at the front of the house; and Jayne Warner and Karin Zdrojewski on costumes.)

Christie says she teaches her students “techniques, helps them stay on track and encourages them with positive reinforcement. The main goal is to allow creativity and expression while providing guidance and maintaining an organized and efficient crew.”

Nico McKible, a sophomore who is a member of the art crew, says Christie “comes to us with ideas and set pieces to paint or make, and we work together with her to come up with the best version of the idea we can. For example, the lettering on the oversized books that will be on either side of the stage were based on a design by Jayden Featherstone and Mia Nelson-Cheyne, and the rest of us worked with them to make their ideas a reality.” 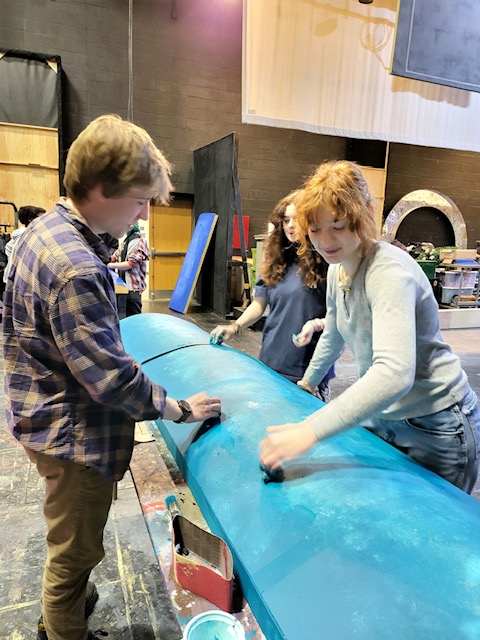 Shepard Rodgers (left) helps Hoppe and Nelson-Cheyne paint the spines of oversized books for the set.

McKible joined Beacon Players last year, helping with the production of Rent. “What appeals to me is the sense of community in crew and getting to work together to make the sets that I used to marvel over as a kid.”

To create the woods, another crew member, junior Ruby Rodgers, says the students “have been spending much of our time cutting and dying fabric in order to build up layers of netting panels, affectionately dubbed ‘portals.’ ”

Rodgers began working with Beacon Players in the fifth grade as a cast member; this year she shifted backstage, where she found “a highly collaborative environment. It encourages teamwork between people of different interests and grades to make the show as good as possible. I have learned new skills from art crew, such as how to dye fabric and add dimension to flat surfaces, that have inspired me to pursue other creative projects.”

In the Woods Cast