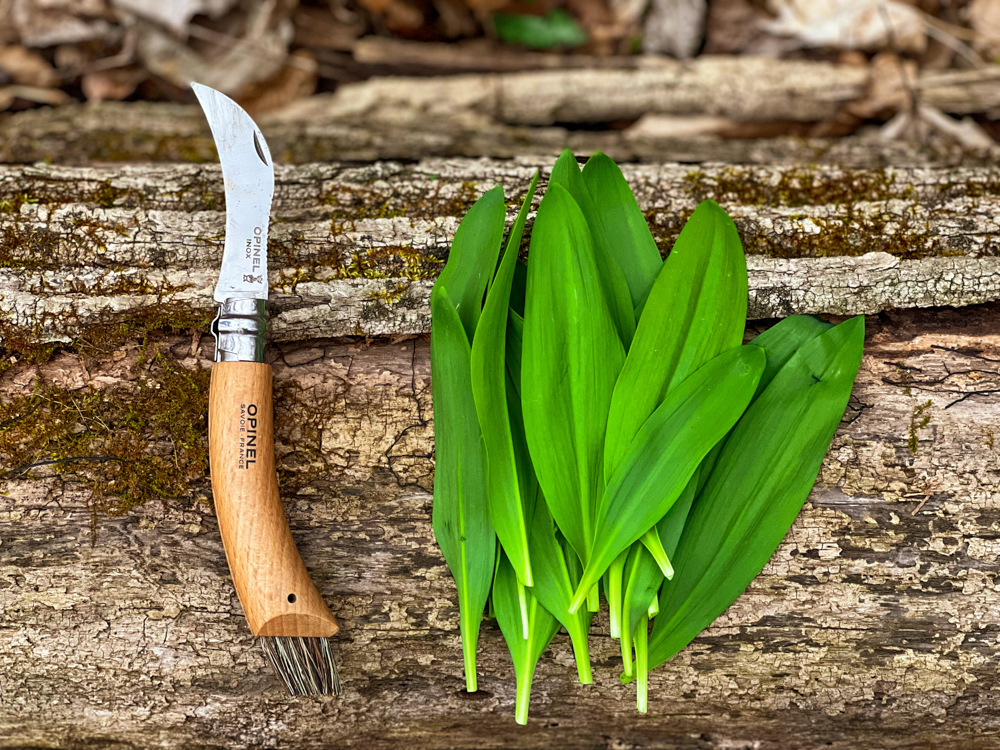 A reasonable ramp harvest. (Photo by B. Cronin)

My son and I go through this each spring: We get to the enormous, lichen-covered mass of boulders that we have to scramble over, and he tells me it’s too steep.

The reason we come back in late April or early May is for ramps, the wild onions that are one of the first edible plants to appear. They’re almost impossible to cultivate, so your best bet is to find a spot where they’re growing and keep it to yourself. Their scarcity makes them mysterious and problematic. When foraging, how much can you take? Where is it OK to harvest? What can you do to ensure that they return?

Because they are hard to find, ramps are a hot item in swanky restaurants, an aura that doesn’t extend to, for example, dandelions, which are also wild and edible but not scarce. This means that those who know where to look can sell them for a hefty price. The more you harvest, the more you can sell. The angel on one shoulder tells me not to overharvest and the ramps will return. The devil tells me to dig.

The generally accepted way to harvest a ramp is to only cut one of its two leaves, just above where the root pokes from the ground. By leaving the roots intact, as well as one leaf, the plant can propagate later in the season. And yet, when you see ramps for sale, they usually have roots. I see them for sale less and less, presumably because market owners have grown weary of being yelled at by customers who see roots.

I understand the temptation to overharvest. The first time my son and I stumbled upon a vast ramp patch, it felt like finding gold at the end of the rainbow. I had been looking for years, doing research, poring over maps. Yet I’ve only ever found a patch by accident. Drunk with luck, I dug roots, filled bags and cooked all week with our bounty draped across salmon, in frittatas, with pasta, on pizza. We returned and harvested each spring, until I noticed the patch was shrinking.

I have since discovered a few other spots with ramps, but I let them be. I no longer dig or fill bags. Instead, I cut enough for one meal. I use what we harvest for the pot-roast recipe from Ronni Lundy’s Victuals: An Appalachian Journey, With Recipes. It is meant to be made in late April, when it’s warm enough to open the windows but not warm enough to leave them open. You wrap the meat in ramp leaves and roast it low and slow, warming up the house and filling it with the fragrance of the deep woods.

Lundy suggests, if ramps can’t be found, to use a mixture of diced garlic and scallions. I make it like that a few times a year and it’s still pretty great. No one in my house turns up his or her nose at a rampless roast, but we ate this week with relish, which is why it surprises me that folks pay so much for ramps at restaurants. What you’re buying can’t be bought.

For me, that’s going back to the same spot in the woods year after year, or the scent of ramps that permeates the car on the drive home. It’s teaching my son the other plants that can be mistaken for ramps: the trout lily, the skunk cabbage. It’s caring for “your” patch and the woods it grows in, so that they’ll return next spring to catch the eye of someone else who’s been looking for years and can now start their own family tradition.