Right after my first week of first grade, learning to read, I happened to see Mary Poppins and was intrigued by the line she sings: “Or you could say it backward, which is docious-ali-expi-listic-fragi-cali-repus.” 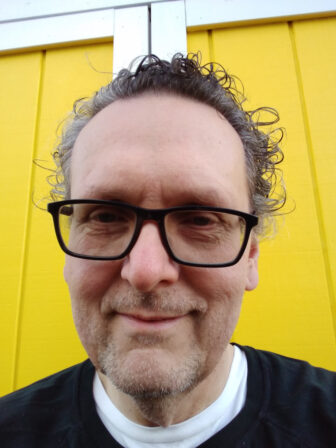 The next week myself and a few other kids were on the reading rug while the teacher sat on a chair with a large-print book. That’s where I spotted the word was. I noticed that backward it was saw and got so excited. My teacher didn’t appreciate the interruption, and I got shut down.

Still, I made up my mind to find all words which, backward, are other words. As the youngest of six children, watching my siblings doing homework, I was ready for it. I taught myself to read backward and over time became quite fluent.

I had another bad school experience when I was in fourth grade. We were filling in yes or no answers in workbooks and I wrote the answers in backward. When we finished, we traded workbooks to grade. The girl grading mine said the answers were correct but written backward. They teacher made me go out to the hall. I learned not to do it in school, but I was so mad it made me want to do it more.

During elementary school I was doing this because it kept my mind occupied; it stopped me from going astray. I was bored and found that my mind could be occupied while still listening.

Around that time family members started calling me Neb. I also started seeing the backward words in my head, written out right to left. Seeing words in my mind I was able to take spoken words and pronounce them backward.

I coined the term retrolexia for what I do. It shouldn’t be confused with spiegelography, which is when a person writes words in a manner which requires a mirror to be deciphered. Retrolexia is pronouncing each word as read from right to left but keeping the words in the same order within a sentence and within a paragraph. One starts at the beginning and goes to the end, as usual, but each word is spelled backward and pronounced accordingly.

By the time I was in sixth grade, I would translate the television evening news backward as it was presented, to the fascination and guffawing of my family. I remember that we had just gotten a TV around the time of President Lyndon Johnson’s famous, “I shall not seek, and I will not accept, the nomination of my party for another term” [in March 1968]. He always started his speeches with “Good evening, my fellow Americans,” and I’d reverse it. My brother and sister were on the floor, laughing, and I realized, “This could be cool.”

What Does Science Say?

After they published a study in 1982 of a philosophy professor who could talk backward, three linguists heard from more than 50 people who could do the same. Five were children ages 8 to 11 and four were adolescents. Most of the subjects could immediately reverse words of up to 10 phonemes, or units of sound.

“A few talked backward starting with the last word in each sentence, but most left the words in forward order [such as Ben Seibert does],” the researchers noted.

Some of the backward talkers used a sound-based method and others a spelling-based method. For example, with sound, silent letters were not pronounced, so bomb became mab. With the orthographic method, bomb became bmob.

I was always a very good student so, as I got older, any teacher who knew about my ability wasn’t concerned. I let some of my friends know, but in school it turned it into a circus sideshow and I started to feel like a trained seal, especially because I didn’t get to explain the thought processes [that went along with the recitation].

I didn’t know anything about dyslexia until many years later. Now I’m always scanning for words I want to use. If I do it backward, I get to decide how to pronounce it. If it’s using Roman letters, I can do it. It works best if I sound it out and use every letter in it.

I tried it using foreign words, but it’s harder, because I think in English. I studied German in college, and have tried it with French and Polish, but I can’t keep the letters in my head long enough.

There’s a fascination that this is, somehow, a new language, which it isn’t. It’s English, with different syntax. Sometimes people scoff and say, “What are you going to do with that?” It’s hard for people to connect. People like the way I present it — I do it as funny as possible — but they can’t see what I see. I was at a linguistic conference once, for other reasons. I talked to a few people there but they didn’t know what to make of it.

What does it sound like when someone talks in reverse? Ben Seibert sings “You’re a Grand Old Flag” at bit.ly/grand-old-flag and recites an original poem, “I T’ndid Wonk,” at bit.ly/wonk-poem.

It’s never caused any problems for me. I can watch subtitles with ease, and if I see a word that’s a palindrome, I will take note of it, but nothing more. If I ever tried to play an LP record backward, looking for secret messages, it wouldn’t work, because that would be going from the end to the beginning and that’s not what I do. I’ve never applied retrolexia to reading music, though there is a piece by Mozart which is basically a palindrome. I’ve never heard it played, though I have a bachelor’s degree in music. By the way, music backward is pronounced “kiss ’em.”

I’m sure there are at least a few other people who do this. I found a chemical engineer in Minnesota but lost the details. I hope to start a database. I would love to compare notes, like, did they start when they were young? And can we actually talk to each other this way?