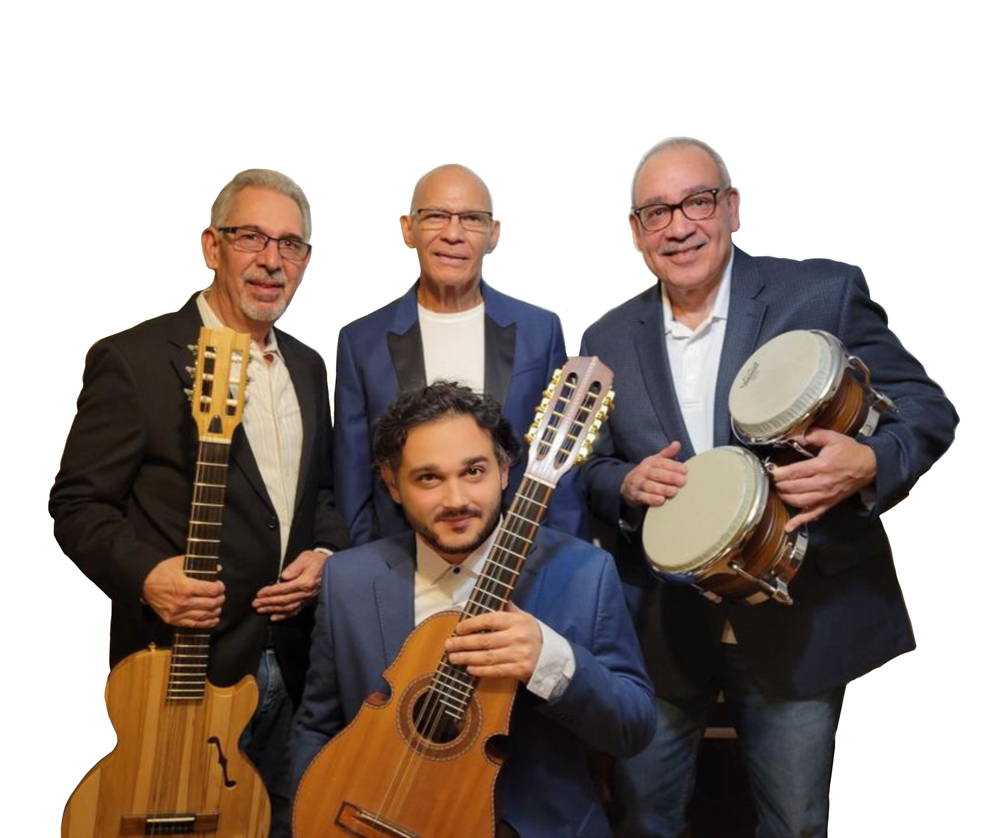 It took John Vergara eight years to feel confident enough on the cuatro, a stringed instrument similar to a Spanish guitar (but smaller), with a bit of viola thrown in, to play for an audience.

The cuatro is the national instrument of Puerto Rico and Vergara is Puerto Rican, so he’d been hearing it for a long time. “I’d seen these guys play, and it’s scary and intimidating, but I decided I was going to learn,” he recalls. “When I got good enough to play seriously, I convinced my friend Tony Velez, a salsa player, to start a band. But it was only after proving myself, because they’re all professionals.”

On Saturday (May 7), The Last of the Mo’ricans, with Vergara on cuatro, Velez on guitar, Sammy Dandrades on guiro (and providing vocals) and Pito Castillo on bongo, will perform an evening of jibaro music at the Howland Cultural Center in Beacon. Jibaro is a word from the Indigenous people of Puerto Rico, the Taino, that translates roughly as “of the mountains.”

Vergara, who owns Lord of the Strings, a Beacon shop where he makes and repairs guitars, ouds, violins, cuatros and ukuleles, says jibaro is “a mixture of all the [musical] elements that came to Puerto Rico mixed with those that existed before, like the Taino, plus African rhythms and Spanish melodic themes.”

He said cuatros are usually made of wood from the island. “Their main job is to play melodies and solos. It’s always accompanied by the Spanish guitar. In Puerto Rico they developed a sophisticated way of playing. The guitar player had to be able to play bass and chords at the same time.

“In a typical group you’ll need two percussionists — one plays a bongo, the other plays a guiro, which is a Taino instrument, a gourd with grooves. Then, of course, there’s a singer.

“The cuatro players — I don’t know what kind of rice and beans they’re feeding them on the island, but they’re very capable musicians,” he says. “The villages where the music developed were agrarian; once the workday was over there was not much to do — there wasn’t even much radio, so they got really good with storytelling, which they combined with music.”

He says the storytelling was related to what the farmers saw in front of them, such as a farmer’s favorite bull, honored with a homage. “There is a lot of humor,” Vergara says. “Sometimes they’ll sing about how the hen is chasing the rooster, or how the dog followed the man to the party and is barking too much. They also sing about food, like, ‘Tomorrow is Sunday and we’re going to have bacalao [fish stew].’ They sing about something to look forward to.”

He says that while the music is performed in concerts, it’s more often heard on a porch, by neighbors. “There’s a huge tradition during Christmastime: If you’re lucky, they show up to your house with a parranda, a Christmas group. You’ll hear a knock on the door and music in front of your house. This is still practiced, even here in America.”

While Vergara grew up in the Bronx, he says he “felt a great deal of pride being Puerto Rican, and for many that’s embedded in jibaro: the lifestyle, the town, the people, love for the flag, the food.”

He says pulling together the band was an accomplishment, because there aren’t many performers in the U.S. who play traditional Puerto Rican music. “I’m fortunate that I have a great friend in Tony Velez — we took half of his band. We’ll have the exact configuration of instruments; it has to be that way or it doesn’t work well, musically.”

The Howland Cultural Center is located at 477 Main St. in Beacon. Tickets for the performance, which begins at 8 p.m., are $20  at howlandculturalcentertix.com, or $25 at the door. For an introduction to jibaro, Vergara recommends the group Chuito el de Bayamon and the singer Ramito.