Abbey Road crosswalks, like on the Beatles album. A “re-energized” tree-planting campaign, along with a network of biking routes and plenty of parking — but no new lots.

The volunteer Main Street Access Committee, created in 2020 by Mayor Lee Kyriacou, presented its final report to the City Council on Monday (April 25), outlining its vision of Beacon as a walkable, pedestrian- and bike-friendly city.

The committee chair, Stowe Boyd, and John Clarke, the city’s planning consultant, who served as an adviser, detailed the report’s recommendations.

Some, such as redesigned signs that direct drivers to public parking lots, have been implemented. Others, like reclaiming parking spaces through more efficient restriping, are on deck or being done this week as part of the Main Street repaving.

City Administrator Chris White said that he expects another recommendation, to convert the Veteran’s Place block into a public park, to come before the City Council this year.

For longer-term proposals, “we’re going to identify what seems most important to the council members and see where we can match those proposals to available funding and staff capacity,” White said.

Notable recommendations are described below. 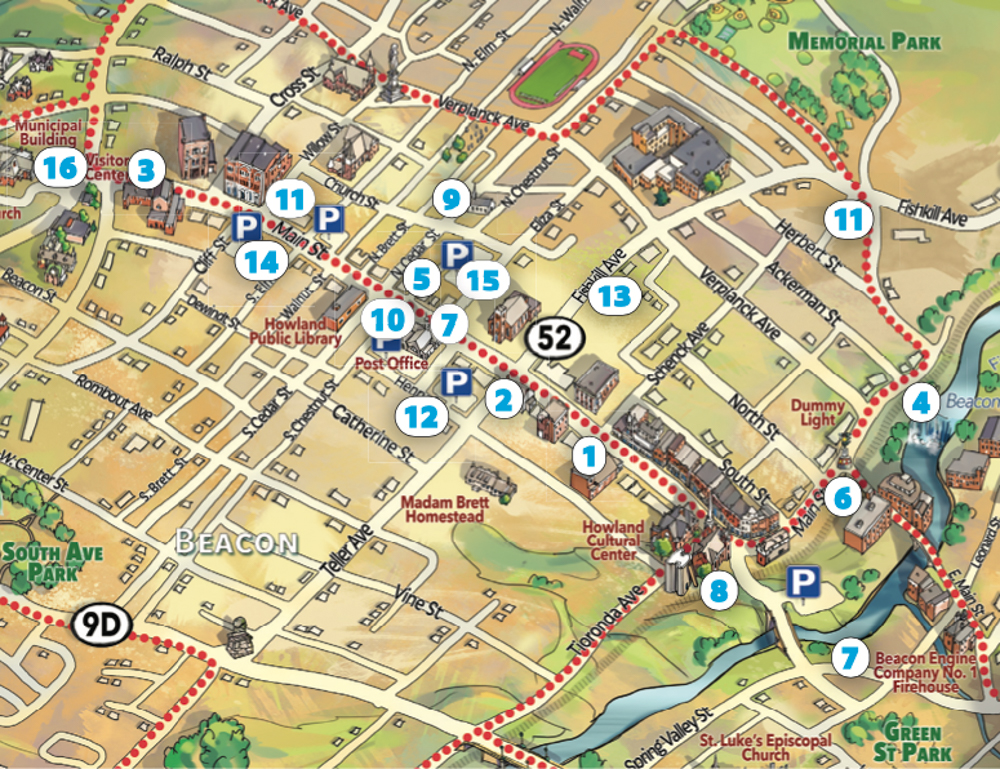 The committee recommends a 20 mph speed limit on Main Street so bikes can safely travel in the same lane as cars. Separate bike lanes are not feasible, it said, because too many on-street parking spaces, valuable to businesses, would be lost.

[2] Implement use of “lead pedestrian interval” stoplight systems at the Teller Avenue and Chestnut Street intersections with Main, which give pedestrians a 3- to 7-second head start before vehicles are given a green light.

[3] Open public bathrooms in at least two buildings, such as the Memorial Building or the Visitors Center at Polhill Park.

[4] This area is owned by the Metropolitan Transportation Authority and The Roundhouse. The committee suggested the city work with both to create a public park overlooking the Fishkill Creek waterfall. The space is in a federal floodway, so development isn’t an option.

[6] Three-way stop signs should be installed near the dummy light, where Main Street is excessively wide and drivers often get confused. Trees should also be added.

[7] Clarke called the Fountain Square area “a nice urban place that has been lost to parking.” The committee’s plan would convert the parking spaces at the convenience store into green space with a fountain, while replacing the spots with new parallel street spaces.

[8] Churchill Street is the “most troublesome” intersection on Main, the committee said. It recommended curb extensions on both sides of the street to improve pedestrian visibility. That also would allow vehicles to turn right or left onto Main. (Right turns are not permitted now.) The city should build a sidewalk with steps along the south side of Churchill, it said, with a pedestrian ramp leading to a pocket park.

[9] The committee suggested converting Cedar Street, which intersects Verplanck Avenue on the north side of Main and Rombout Avenue on the south side, into a bike boulevard with temporary barriers. “Bikes are an easy way to get around the city, if you feel safe,” Clarke said. Traffic would be allowed for residents living on Cedar, but the barriers would prevent use as a through-street. Afterward, the committee said, the council should hire a consulting firm to create a biking plan for the city. The committee also recommended adding more inverted U-shaped bike racks on Main Street.

[10] The city’s 2007 and 2017 comprehensive plans suggested creating seven pocket parks along Main, such as at the Dutchess County building, the Howland Public Library and the post office, that could double as entry points for public transportation. “I don’t know of anywhere in the country that has such an interesting way of integrating buses with land use in the city center,” Clarke said.

[11] The committee offered a plan that could create more than 180 new parking spaces without constructing new lots, such as by striping side streets within two blocks of Main more efficiently. Priorities would be the north side of the first blocks of Herbert, along with Brett, Eliza, Cedar and Willow streets and Blackburn Avenue. Tioronda Avenue should be striped and signed to prevent parking on the east side, south of Van Nydeck Avenue, it said.

[12] Restriping could create about 12 new spaces on the west end of Henry Street.

[13] The city also could add 22 spaces on the east side of Fishkill Avenue; [14] reconfigure the rear lot at the Dutchess County building to add 37 spaces; [15] restripe the Eliza Street lot with 9-foot spaces; and [16] add 25 spaces on Wolcott Avenue (Route 9D) near City Hall.

If needed, the second phase of the committee’s parking plan would implement paid parking, which would create revenue to finance the third phase — parking structures — if paid parking does not sufficiently control the demand.