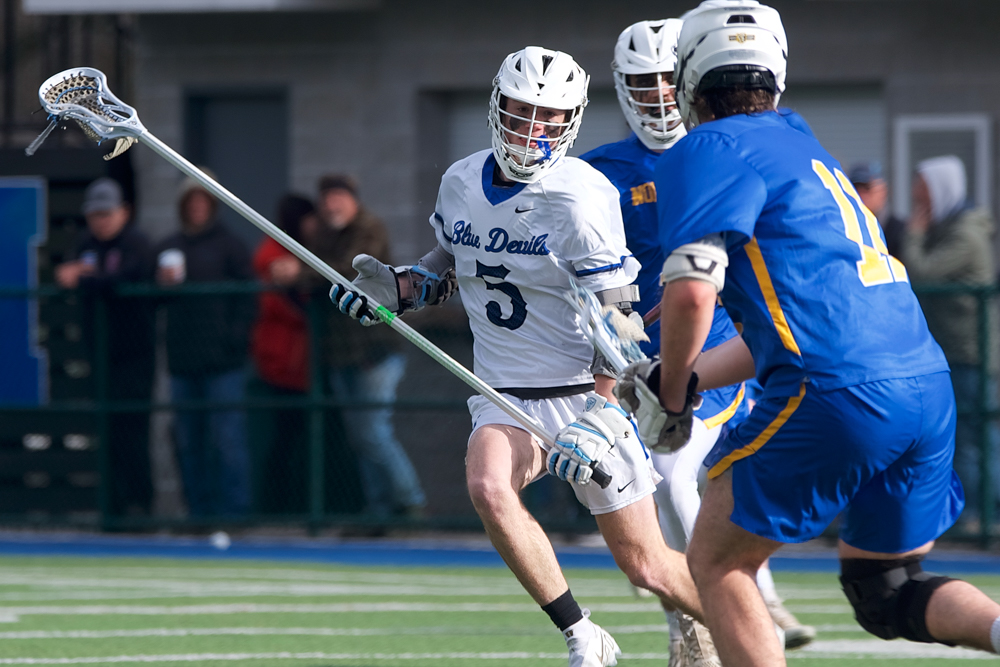 Junior long pole Thomas Tucker gets the ball out of Haldane's defensive end against North Salem. (Photos by S. Pearlman)

A young Haldane boys’ lacrosse team has been surpassing expectations, last week recording victories over Croton, Eastchester and North Salem to improve to 7-2.

On Wednesday (April 27) in Cold Spring, the Blue Devils dominated North Salem throughout, building a 4-0 halftime lead on the way to a 7-2 victory.

“We got a great effort from the guys on a surprisingly cold and windy day,” said Coach Ed Crowe. “They’ve been doing everything they’re supposed to do.”

On Monday at home, the Blue Devils led 3-1 at the break over Eastchester and won, 9-3. Giachinta scored five goals and recorded two assists, Gaugler scored twice and assisted on a goal, and Robbins and Will Sniffen each scored.

Hankel stopped 15 shots. “He’s been locked in,” Crowe said of his goalie. 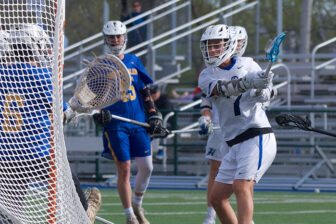 On April 21, Haldane defeated Croton, 6-2, behind a Gaugler hat trick. Giachinta dished out three assists and had a goal, and Robbins and Frankie DiGiglio each scored.

“Our defense has been stellar,” said Crowe. “Nate Stickle, Thomas Tucker, Brody Corless, PJ Ruggiero and Hankel have all been phenomenal. They keep us in games.

“On the other end, we have three guys who have been consistently scoring in Giachinta, Robbins and Gaugler,” the coach added. “We’ve gotten balanced scoring, and we hope to be there at the end with the top teams.”

Haldane is scheduled to host Horace Greeley on Saturday (April 30) at 7 p.m. for Senior Night, when it will honor midfielders Soliel Gaines and Giancarlo Carone. The Blue Devils will host Wappingers on Monday at 4:30 p.m. and travel to Pawling on Tuesday.

Haldane dropped an 8-2 decision at Irvington on Tuesday (April 26), with Julian Ambrose taking the mound for the first time this season in what coach Simon Dudar called “a big positive for the team,” after he battled early injuries. “We kept him to a strict pitch count, and he put in three solid innings,” Dudar said.

Ambrose allowed two hits, struck out two and walked two, and didn’t allow an earned run. Dan Nakabayshi came on in relief, but the eighth-grader struggled to find the zone, giving up four runs. Ryan Eng-Wong relieved him and went one-plus innings, recording two strikeouts, allowing no hits and no runs.

“Unfortunately, our defensive woes continued, as did our lack of offense,” Dudar said. “Irvington scored eight, but only three were earned.”

Jake Hotaling and Eng-Wong recorded all four of the team’s hits; each had a single and a double.

“We knew the season was going to be bumpy with such a young team,” Dudar said. “We’re not racking up as many wins as we’d like, but we’re gaining game experience that we came into the season lacking.”

Haldane (2-5) is scheduled to host Yonkers Montessori Academy today (April 29) at 4:30 p.m. and then will play at YMA in a tournament on Saturday that also includes Saunders, Peekskill and Palisade Prep.

Beacon picked up a 9-8 win on Saturday (April 23) at home against Wallkill, with freshman Derrick Heaton earning the victory with four innings of relief, scattering two hits while giving up no earned runs.

Heaton was also 3-for-4 at the plate and drove in Tyler Haydt with a game-winning RBI in the bottom of the sixth. Chase Green was 3-for-4 with two RBI and a stolen base, and Joey Vollaro and Haydt each had a hit and an RBI.

The Bulldogs (4-3) are at Monroe-Woodbury today (April 29) and travel to Monticello on Monday.

Beacon dropped a 9-5 decision on Tuesday (April 26) at home to Cornwall Central, with Olivia Ciancanelli taking the loss in the circle. Katherine Ruffy and Christina Merola each went 3-for-4 with an RBI, and Mikayla Sheehan went 2-for-3 with a run scored.

“We didn’t play our best game,” said Coach Michael Carofano. “We had too many mistakes, left too many runners on base.”

Beacon earned an 8-4 victory at Lourdes on Monday (April 25), with Ciancanelli picking up the win with three strikeouts and six hits allowed. Merola drove in a pair of runs, and Spiak and Rinaldi each had an RBI.

“That was a huge road win against an old rival,” Carofano said. “Olivia pitched a great game, we backed her up in the field and we had good at-bats. Christina had clutch hits for us and Olivia Spiak did a great job getting on base. Leanna continued to see the ball well, and Isabella White had a huge bunt in the middle innings. I’m proud of the girls for playing their best game.”

Beacon also beat Washingtonville, 11-4, on April 22 at home, with Ciancanelli earning the win. Merola, Zukowski, Rinaldi and Sally Betterbid each had two RBI.

The Bulldogs (3-7) were scheduled to host Goshen on Thursday (April 28) and Wallkill at 11 a.m. on Saturday (April 30) before traveling to Monticello on Monday and Wallkill on Tuesday.

After a tough 18-4 loss on April 22 to Goshen, Beacon rebounded on Monday (April 25) to earn its first win of the season, defeating Roosevelt High School in Hyde Park, 9-8. Anaya Camacho had five goals, Kasey Senior had a hat trick and Bethany Rudolph had a goal. Josalyn Pagan had eight saves in net.

“The team played well together, and the communication was good on both offense and defense,” said Coach Taylor Modica.

On Wednesday, Beacon dropped a 16-3 decision at Saugerties, with Gabby Kuka scoring twice for the Bulldogs and Camacho adding a goal.

The Bulldogs (2-5) will play today (April 29) at Minisink before hosting Newburgh Free Academy on Wednesday at 4:30 p.m.

The Haldane team, which began play this season, recorded its first win on April 22 at home with a 17-0 victory over Keio Academy.

The Blue Devils had a tougher road this week, falling on Monday at Rye Neck, 16-6, and Tuesday at home to O’Neill, 13-6.

Carmela Cofini, Nelson and Johanson each had a goal against O’Neill, and O’Hara notched a hat trick.

“Our defense did a great job with sliding, communicating and dropping into the zone,” said Coach Keri Dempsey.

At Rye Neck, Nicholls and Johanson each scored twice, and Ruggiero and O’Hara each had a goal. Mahoney had 17 saves in net.

Haldane was scheduled to face Edgemont on Thursday (April 28) at home before traveling to Blind Brook on Saturday and Keio on Wednesday.

The Beacon girls dropped a 150-176 decision to Cornwall on Tuesday (April 26) in a match played at the Southern Dutchess Country Club. Elizabeth Ruffy and Sophia Campagiorni led the Bulldogs. “Both teams played hard, despite the raw and rainy weather conditions,” Coach Jeanmarie Jacques said.

Beacon traveled to Rondout Valley High School on April 23 for the Gander Invitational.

“That was a huge 3-second personal improvement for Rubio in the 400 hurdles,” noted Coach Jim Henry. “That race ranks him as the ninth-best sophomore in New York in the event. I’m impressed by the work he’s been putting in and the rapid rate of improvement.

“It’s also great to see Lucas make a 4-inch improvement in the high jump [to 5-8],” Henry said. “His enthusiasm and excitement fire up the rest of the team.”

Beacon will travel to Marlboro today (April 29) for the Iron Dukes Invitational.

Eva DeChent, a junior at Putnam Valley High School, was named the Class B Player of the Year by the New York State Sportswriters Association. The guard averaged 23 points and 10.8 rebounds per game for the Tigers, who advanced to the state semifinals. Her teammate, senior Amanda Orlando, was named to the All-State sixth team.