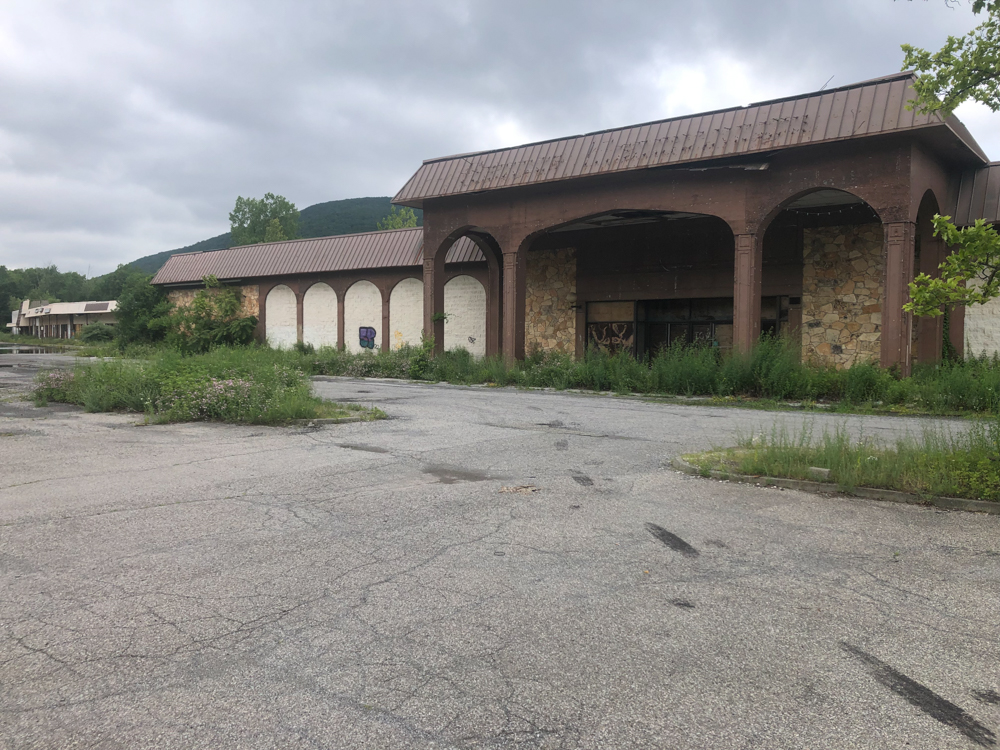 A developer plans to transform the abandoned southern end of the Dutchess Mall in Fishkill into a warehouse facility. (Photo by C. Rowe)

A developer wants to revive the south end of the long-abandoned Dutchess Mall by building an industrial warehouse.

Crow Holdings Industrial, a Dallas-based firm that its attorney calls “one of the country’s leading developers of industrial space,” has applied to raze the abandoned structures  and redevelop the mall, which is located on Route 9 just north of the Putnam County line. The northern part of the complex is occupied by Home Depot and the Fishkill campus of Dutchess Community College.

If approved by the Fishkill Planning Board, CHI said it would construct a 350,000-square-foot warehouse with 215 parking spaces, 78 loading docks, four drive-in ramps and 30 trailer parking spaces. The company proposes to subdivide the 39-acre tract, with 29 acres to be used for the warehouse and the remaining 10 acres retained by another company, Hudson Properties of Yonkers, for possible development.

According to the Town of Fishkill, the development could create as many as 150 jobs with annual salaries estimated to begin at $50,000. CHI also has developed projects in Texas, Georgia, California, New Jersey and other states.

The Fishkill project would use two existing entrances from Route 9, according to materials submitted to the Planning Board. The warehouse would have roughly the same footprint as the existing buildings, and a wetlands area at the rear of property would not be disturbed, the developer said.

The Town of Fishkill has long encouraged redevelopment of the mall, which has been closed since 2001. “The site has been abandoned and in a state of disrepair for decades, and prior administrations achieved nothing at this property,” said Supervisor Ozzy Albra in a statement. “I’m glad we’re now looking at a proposal for redevelopment, beautification and economic growth.”

At the same time, a religious denomination has told the Planning Board it would like to construct a recreational complex just north of Beacon, about a mile west of Dutchess Stadium.

The Watchtower Bible and Tract Society of New York has applied for approval to build what it calls the Fishkill Support Center of Jehovah’s Witnesses, an office and recreational facility for volunteers and members. The site is at Chelsea Industrial Park, an area north of the I-84 interchange that on its west borders land owned by the Metropolitan Transportation Authority.

Although the two parcels, which total about 57 acres, are zoned “planned industrial,” the Mount Gulian Historic Site and several residential developments are nearby.

The organization said it plans to construct a 47,000-square-foot, two-story office building and a 15,000-square-foot maintenance building. It would also reconstruct an existing 14,500-square-foot warehouse for storage and exercise use and add an accessory park with soccer and softball fields, basketball, tennis and volleyball courts, and meditation areas.

A 247-space parking lot is also included in the plans.

Residents from Fishkill and surrounding municipalities have expressed concern about the size of the proposal and the traffic and noise it could generate.

Beacon resident Theresa Kraft warned the Planning Board at its June 9 meeting of the “proliferation of overdevelopment in southern Dutchess,” saying that “especially in the areas of Route 9D, it is imperative” that the town “scale back this extensive overbuild.”

Kraft said the proposed construction “will forever change our historic viewsheds from the Hudson River and the future greenway trail proposed along the river.”

Faisal Beg, who lives in the nearby Holly Ridge development, wrote in a letter to the board that when his family bought its property in 2004, “we were promised waterfront development and a quiet neighborhood.” With Brockway Road and Route 9D “so crowded in the evening, which is when most games would happen [at the complex], it will be a nightmare,” Beg said.

Residents have also said they’re worried that the project will disturb previous environmental contamination at the site.

In their project materials, Watchtower officials say the group has gone to great effort to “avoid disturbance of the environmental remediation area by proposing development that will maintain the 2-foot depth soil cap.” The plans restrict the installation of lighting, bleachers or sound stations in the areas of the softball and soccer fields. Backstops, goals and fencing will be placed on the surface of the ground, rather than underground.

In addition, fill from an “on-site spoils pile” will be used to increase the depth of the soil cap, using soil that has been approved by the state Department of Environmental Conservation, it said. According to the DEC, remediation of the site was completed in 2014; it was purchased by the Watchtower Society in 2015.