Cross-hatching its annual Members’ Show and the celebration of its 150th anniversary this year, the Howland Cultural Center (HCC) has created a fusion of the two in Reflections of a Local Life, an exhibit that opens on July 2 and runs through July 24.

The show features 50 works on both floors of Howland, whose building was commissioned as a library in 1872.  In addition to photographs, the media represented include monotype, acrylic, watercolor and oil paintings and assemblage.

Gallery Committee Chair Karen E. Gersch, who doubled as curator for the show, came up with the concept. Her prospectus to artists directed them to “create new work that looks back at old memories or moments that were moving, inspirational, defining: whether a childhood reverie or family portrait, depictions of growing up in Beacon or the Hudson Valley.”

They responded with works that “paid homage to their roots and reveries,” said Gersch. “One not only enjoys, but learns a lot from these pieces,” she said. “Together they make a fine kaleidoscope of history, special scenics, sensitive portraits and local lore.” 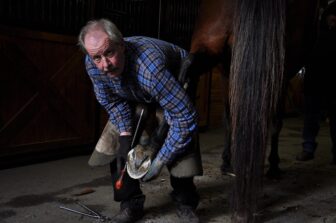 “The Farrier,” photo by Jorge Santos

“On the Hudson Valley horse farm where I work, John Boylan was the farrier for 40 years. This portrait was taken just before John died, in January of 2020.”

“Pioneer,” a painting by Karen E. Gersch
“We kissed L.I. goodbye and moved upstate after my father found work at West Point. Ten years old, the forests became my own training academy. Before that, I never knew I needed tension in my legs to hold a handstand, never understood how winds and rushing streams could take other tensions away. Balance and balancing became a newfound world to pioneer.” 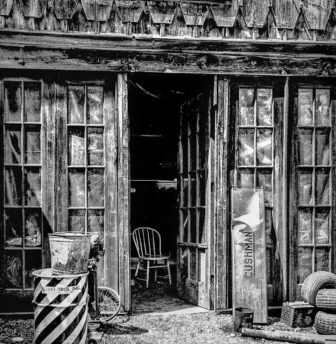 “Cushman’s Place,” photo by Sandra Belitza-Vazquez
“In the summer of 1972 I returned to New York for a family visit. My grandmother lived in Wappingers Falls. One day, she suggested we take a ride around the area. I was fascinated by the old building with the tires lying outside, the shiny Cushman sign and the chair inside the doorway. The texture of the wood siding made for a most interesting background for both the objects within and outside of the building.” 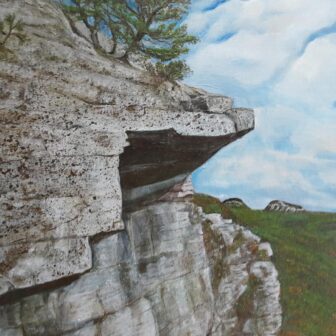 “Hiker’s View,” acrylic on canvas by Maureen Norcross
“The majesty of the ‘Gunks’ and this oft-photographed view presented inspiration for me to bring the amazing layering of conglomerate, sandstone and shale to ‘life’.” 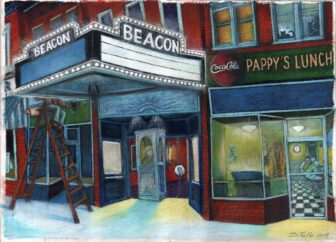 “Beacon Theater 1966,” mixed medium by Sam DiTullo
“The Beacon Theater was my first real job when I was 16 years old. Those are my legs dangling from the ladder. I had to change the letters on the marquee every Thursday night. I wanted to combine that experience with the feeling I had at 12 or 13, when I went to see a movie at night for the first time.” 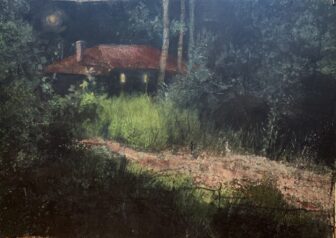 “Moonlit Path,” watercolor by Orna Greenberg
“I love old structures that have been beaten a bit by years of standing in the elements, because they develop personalities. One can only imagine their stories.”