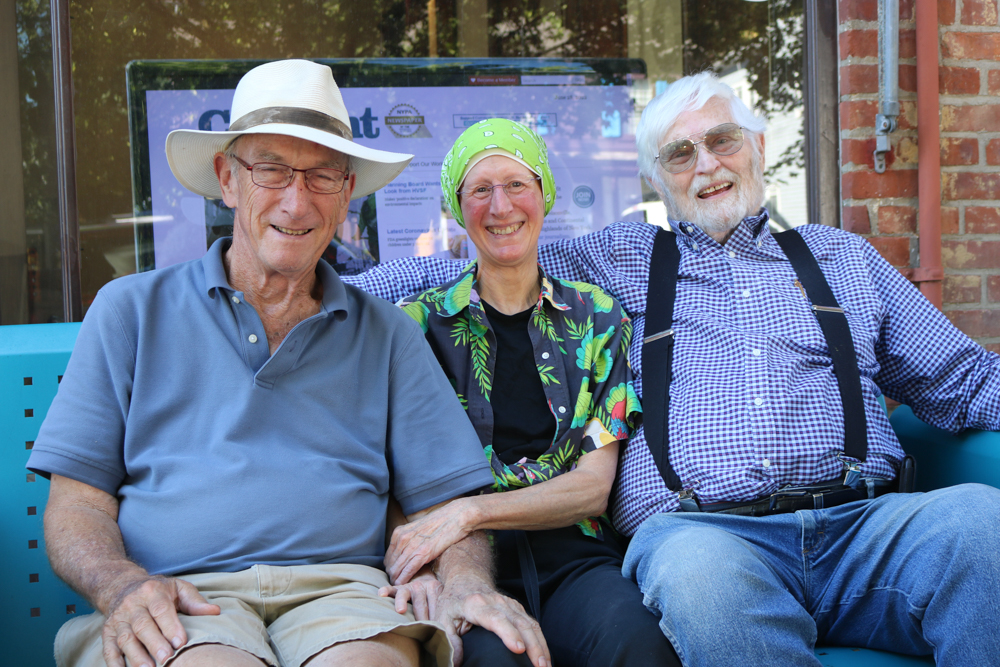 Richard Linklater’s 2014 feature movie, Boyhood, was hailed as “groundbreaking,” largely because it was filmed over a 12-year period.

Its roots go back to Thanksgiving Day in 1968, when Chuck and Michelle found themselves in Middletown Valley, Maryland, visiting Sandy Sparks, a close friend of Michelle from her days at the University of Illinois School of Art and Design.

An after-dinner stroll down a country road led the trio to a farm, where the Bowlus family, aided by friends, relatives and neighbors, was deep into an annual Thanksgiving tradition: the butchering of two hogs.

“I had never witnessed anything like it before,” Chuck recalls.

“He was fascinated and asked if we could come back next year to film,” Michelle said. The Bowluses readily agreed.

The Cliftons would go on to a remarkable career in cinematography and filmmaking, but at that point Chuck had produced just one film, a 1966 documentary chronicling the last horse-drawn milk wagon in the U.S.

They returned to the Bowlus farm the following Thanksgiving, shooting film for 12 hours, starting at 5:30 am. Chuck operated the first camera; Mike Gilligan, a still photographer with no movie experience, shot the second one; and Michelle assisted, reloading film magazines every 10 minutes.  Scott Warren, a volunteer, recorded the sound.

The process ended with an amazing amount of food, and not just the expected bacon, ribs, roasts and pork chops. Wasting no part of the animals, the Bowluses also produced sausage, broth, “pudding,” lard, crackling, scrapple and hog maw.

“Country butchering is a lost art,” said Terry Poffinberger in a 2021 interview included in the film. “Not many people do it anymore. “

Poffinberger, who still lives within sight of the Bowlus farm, was 18 when he and his dad helped with the butchering that day, more than five decades ago. Audiences today may wince at the film’s brief opening scene, the killing of a pig with a .22 caliber rifle, but he said the family “tried to be as humane as possible.”

Michelle said they wrestled with whether to include the killing, but decided the film could not start “without the most dramatic part” and used editing to soften the impact.

An unmistakable aspect of the 49-minute film is how hard more than a dozen people worked, all day long, to process the food. Even more striking was the constant, friendly chatter, frequent laughter and even the occasional sound of a young child’s voice in the background. They were people who knew how to work, in a manner so common on farms of that era.

Other than two interviews done last year, the film was shot in 16mm Kodak black-and-white film, adding to its historic feel. It was also shot using existing, natural light, something Chuck “absolutely” feels adds to its visual appeal.

He praised Gilligan, who had never previously been behind a movie camera, for his “beautiful, unusually lit, close-up shots of faces.” Gilligan might accept the praise, but facial close-ups are not his most vivid memory.

“What I remember most is falling into a ditch and ripping open the back of my pants,” he laughed.  “Michelle had a safety pin, fixed me up and I continued shooting.” 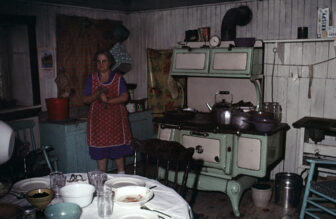 This kitchen belongs to the Bowlus family, the subject of an award-winning documentary. (Photo provided)

After the shoot, Chuck and Gilligan spent four days editing the film and syncing it with the audio. Then, they put the project on hold and struggled to find the time and money to finish. Gilligan and his wife, Sonja, now also Garrison residents, later became partners in the Cliftons’ production company, Hudson River Film and Video.

For 50 years, the raw footage sat in the Cliftons’ garage as they became busy with freelance jobs and other productions: interviews with famous people, such as Walter Cronkite, Cher, Joe Frazier and Kelsey Grammer; and documentaries for PBS.

Freelancing meant having to be ready to go on a moment’s notice, such as the time Dateline NBC called while Chuck was at the second tee at The Garrison golf course and asked how fast the Cliftons could come, said Chuck. But in 2019, they started thinking about their unfinished business in Middletown Valley.

“We thought it would be great to complete our documentary in time for the 50th anniversary,” Chuck said.

An attempt to fund the project through Kickstarter proved unsuccessful. Enter Sandy Sparks, the friend who first introduced the Cliftons to the Bowlus family.

She offered to be the documentary’s executive producer, an undertaking that cost between $75,000 and $80,000. Cold Spring resident Susan Peehl spent 18 weeks editing the footage, comprising 17 rolls of film that Chuck brought to her, “not necessarily in order,” and 12 reels of audio accompanied by an old Nagra recorder.

“The original idea was to do a 10-minute piece,” said Peehl. “But as we realized the coverage was so beautifully illustrative of this now historic, cultural event, we set our sights on a longer version.”

During editing, according to Peehl, Chuck “relived the agony of mechanical failure” during filming 50 years before, when they were unable to sync the sound with the footage.  The documentary, which features only ambient sound and is without narration, was completed last fall and has been entered in about 20 film festivals across the country.

In February 2022, at the Los Angeles International Film Festival’s Indie Short Fest, it won Best Documentary Short and honorable mentions for Best Cinematography and Best Editing. In April, it earned a Remi Award at Worldfest-Houston, which draws 4,700 entries from 77 countries. And in June, it received awards of merit at the Vegas Movie Awards for Best Documentary Feature and Best Editing.

The Cliftons’ dream now is for their film to achieve at least one more honor.

“Ever since we shot it, I’ve felt our film would make a significant contribution as a historical document in the U.S. Library of Congress National Film Registry,” said Chuck.