Amanda E. Gross, in partnership with the Compass Arts Creativity Project, recently installed a sculpture, “You Belong,” outside the Beacon Music Factory. 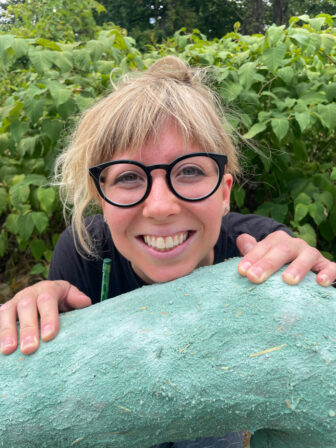 Who came up with the idea for this piece?

I did. Last fall I saw there was a grant opportunity from Compass Arts to do something local. I didn’t get that grant, but I wanted to do a project anyway and [Compass Arts founder] Gina [Samadge] was on board. I’ve been wanting to get into public art for a long time. Originally, I thought it would be more participatory, with more kid involvement, but it didn’t work out that way. I started in March and April, planting the seeds for plants I wanted to go around the sculpture. It was the first time I’ve worked with these materials, and it was fun experimenting. When first proposed, the sculpture was going to be more set back, but once I started, I realized how big it would be. I went to Gina and said I’d like to put it in front, and she said, “Go for it.” It was installed at the beginning of July.

What came first, the text or the design?

The text. A lot of public art is not as explicit as I would like it to be, so I wanted it to be spelled out. Like many people, I struggle with social anxiety. I also wanted this to speak to the Beacon audience, especially because there are class issues here between older, blue-collar residents and new Beaconites. It’s important to say “you belong” to everyone. 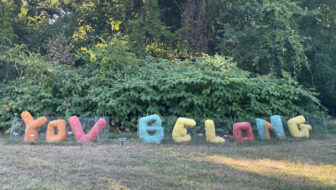 Why did you include plants?

I thought that would be important in building community. I wanted to use edible plants — which is ironic because the sculpture is located next to a mini-food pantry. If there were more space to grow edibles, there’d be less need to have a food pantry. I wanted to label all the plants, to say, “This is your community,” that is, the community you belong to extends to the community of animals that live in it. As it turns out, there’s a large bush nearby with woodchucks. They emerge to eat the snap peas that I planted.

What will happen to the sculpture?

It’s biodegradable. I want to create public art that is climate-aware. I also needed it to be colorful and retain the textures of the natural materials. When I moved to Beacon from Chicago in 2017, my partner and I started a garden using natural materials like bamboo trellis. I wanted to move into natural materials and incorporate that. If climate control is the biggest issue of our time, everybody has to be involved and included in the solution. We’re an interconnected ecosystem.

Does “You Belong” connect to the friendly lettering?

Oh, yeah. They’re both huge components. A lot of public art focuses on the negative. I wanted something positive that people could move toward, something welcoming. One of my neighbors said she could feel that I put my heart into it.

It reflects radical inclusion, with that term implying that everything goes beyond the more common spectrums of gender, ethnicity, age, etc., to include all beings, all animals, the ecosystem in which we live. The message of radical inclusion is timely, when many people feel “othered” due to LGBTQ+ status, race, neurodiversity, disability. It all extends beyond humans. I don’t kill anything, including bugs. In our own garden my partner and I try to see what grows on its own, including those things which may not be native but are thriving. It’s great to already see a response to that. An 11-year-old neighbor said she thought it was cool. That was wonderful to hear, unprompted. It makes me happy that the “you belong” message is resonating; that’s how I want kids to feel.

One thought on “5 Questions: Amanda Gross”