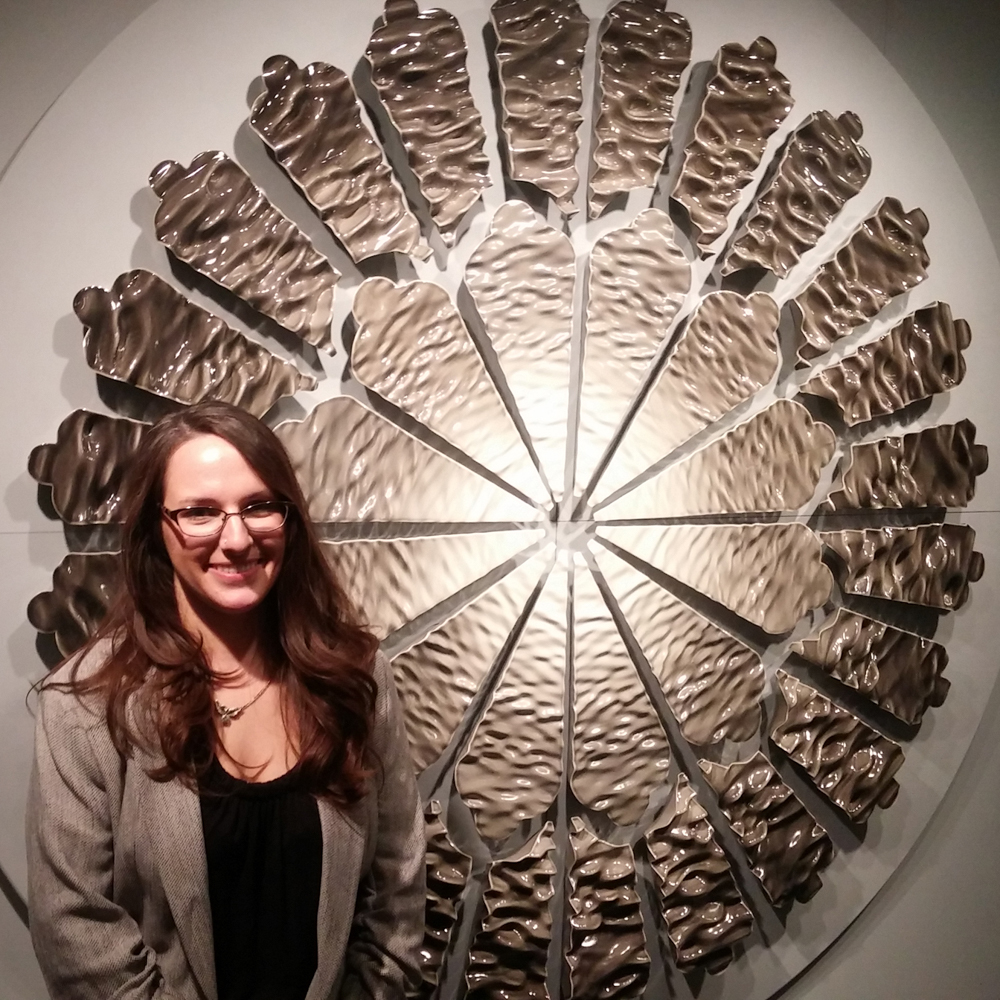 Sarah Heitmeyer with “Reduce Me To Silence”

If there’s anywhere that needs calming art, says Sarah Heitmeyer, it’s the hospitals, airports and other institutional spaces where we bide our time.

“What we seek in sanctuaries is a quiet space to process and consolidate thoughts, step out of our habitual norm to reflect and find hope,” writes the ceramic artist, whose work will be one half of a two-person exhibit with Scott Lerman, Natural Order, that opens Saturday (Sept. 10) at the Garage Gallery in Beacon. Hospitals and airports, which “accommodate large numbers of people going through immense change,” can “put their captive audience at ease with the support of beauty, so they may gather hope in life’s changes,” she said.

Heitmeyer focused on drawing and painting in high school but switched to ceramics at Alfred University. “I immediately felt the energy of all the other people working in clay,” she recalls. “I dove right in, wanting to pursue this energy.”

At her first class on the wheel, Heitmeyer found herself “enjoying how much command clay has, with so many material properties and so much process I was interested in. I also worked in a darkroom, finding I loved that process. At the same time, in my painting class, I noticed the lack of materiality. A year later, when I took a tile class, it fused my interests in two-dimensional work.”

She knew she wanted to pursue the residencies and internships necessary in building a portfolio for graduate school — she eventually attended SUNY New Paltz — and aspired to work in a design and production studio, “putting my work out into the world.”

Heitmeyer wound up doing just that, working for ceramic studios such as KleinReid, Kala Stein Design and ModCraft Tile, as well as at the Hudson Valley Additive Manufacturing Center, a digital design and fabrication lab.

Most of her fabrication is done at her Fishkill studio, where she creates commercial prototypes and gallery pieces. Much of her work is decorative wall tile, emulating tides and other properties of water. The modular works range in size, she says, “from intimate to monumental, and bring the restorative power of nature into the built environment.”

She prefers creating pieces that can be hung on the wall, “something parallel to your body, at eye level. I prefer to make modular pieces, rather than ephemeral, temporary art installations; I love working with multiples and dividing spaces.”

Her technique evolved while she was in graduate school. “I was always trying to create this feeling of calm, with movement,” she says. “I struggled because I wanted to be specific on the feeling. I was doing a photography class and realized how many photos I had taken of water ripples, with their gradient color and scale — it became obvious how drawn I was to this imagery.

“At the same time, I was developing skills in computer-assisted design while working at a digital fabrication lab. I learned how to translate a photograph of water into a 3D form, and once I had that tool I was able to play around with how I rendered that image, altering the form into any tile pattern I wanted.”

Heitmeyer says she begins a piece with a vague landscape in mind that connects to an emotion or the feeling of being in a certain place. She uses CAD to process photos of water to sculpt and integrate into a pattern; she brings these forms into her home studio by using processes such as 3D printing.

From there, she presses clay directly onto the form or uses it to make a plaster mold for slip-casting, pouring liquid clay into the mold. She says the work is finished by choosing a glaze to convey the emotion she hopes to capture.

Heitmeyer created her home studio during the pandemic while stretched between part-time jobs and a new baby. “Being home more, it helped me realize that I could shift my focus and strategize more on getting myself and the work out there,” she says. For inspiration, she frequently finds herself at the Hudson River, seeking a “large expanse that feels immersive. The river and lakes have that glassy quality where you can study the movement — much more so than the ocean.”

The Garage Gallery is located across the street from 11 N. Elm St. in Beacon, a half-block off Main Street. Natural Order, which also includes Lerman’s photo-based prints, will open Saturday with a reception from 4 to 7 p.m. and continue from 1 to 5 p.m. on Saturdays and Sundays through Sept. 25. See garagegallery.com.