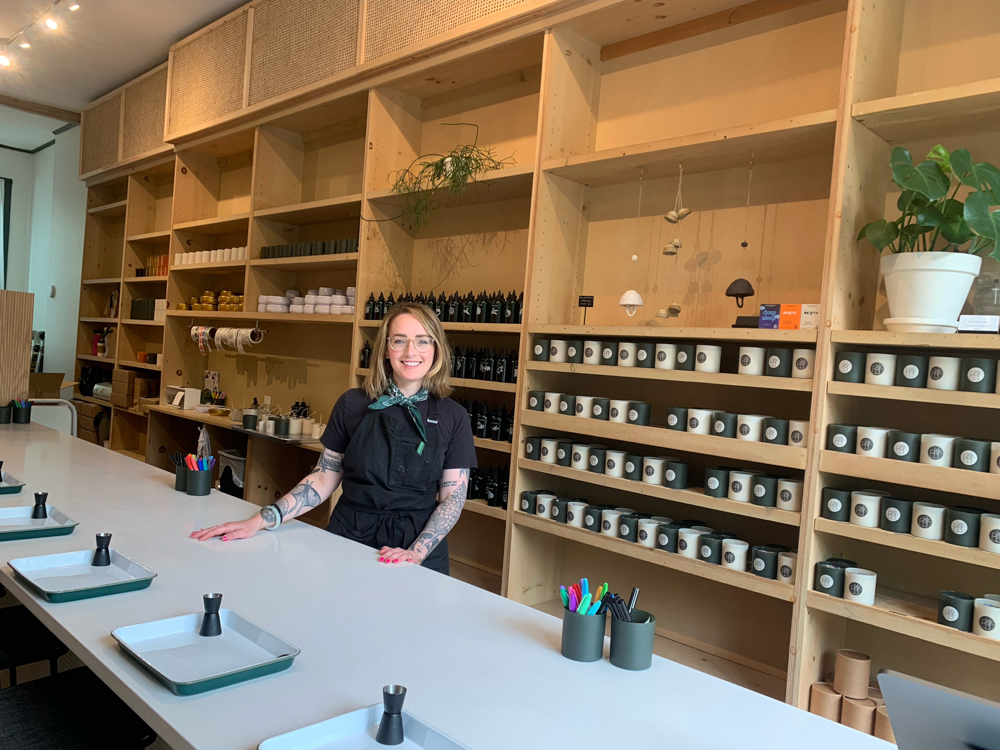 Alexandra McGill has opened Mundane in the space formerly occupied by The Country Goose. (Photo provided)

There’s a new goose in town and it smells terrific.

Many aspects of the space formerly occupied by The Country Goose for nearly four decades remain the same, including the shelves and the checkerboard strip on the floor.

“It’s pretty shocking for people who had no idea [Country Goose owner Leonora Burton] retired,” said owner Alexandra McGill. “They’re usually worried about her health, but I’m happy to tell them that she left [for her native U.K.] on her own terms.”

Clean lines replace the charming clutter that Burton cultivated. A white quartz-topped bar with eight chairs and settings dominates the space. A row of shelves to the left are lined with candles featuring more than 60 scents and other accoutrements.

Customers can buy a ready-made fragrance or work with McGill to combine their favorites for custom candles, ceramic beads akin to potpourri or oil for a reed diffuser, which resembles incense sticking out of a vase.

Client-centered scents are blended after bellying up to the bar, set with trays that include a jigger, typically used to measure alcohol, and a spoon for perfecting the concoction. McGill wears an apron, but looks more like an arts-and-crafts counselor than a bartender.

She recommends sticking to two or three fragrances. “It’s like paint,” she said. “When you start mixing a lot of colors, everything becomes brown.”

Candles take two hours to settle, so she encourages customers to visit other shops during the wait (or she can ship). She plans to extend the line into body lotions and soaps, but testing and blending bases and oils will take time.

Participatory retail presents a learning curve for customers, though scent-experience outlets are gaining in popularity. Similar stores exist in Hudson, Manhattan and Montclair, New Jersey. About half of McGill’s visitors know their way around; the rest require guidance, she said.

McGill developed her nose working at a longstanding scent emporium on Long Island, where she grew up. “I fell in love with the creativity, the interaction with people and that adrenaline rush after coordinating a lot of things at once and making clients happy,” she said. “People leave with something they’ve made and hopefully they had a good experience.”

She met her husband, Charlie, in New York City. After bouncing around the country, they drifted back east, stopping off in Columbus, Ohio, for a few years, where she worked as a manager at Candle Lab and forged her path. 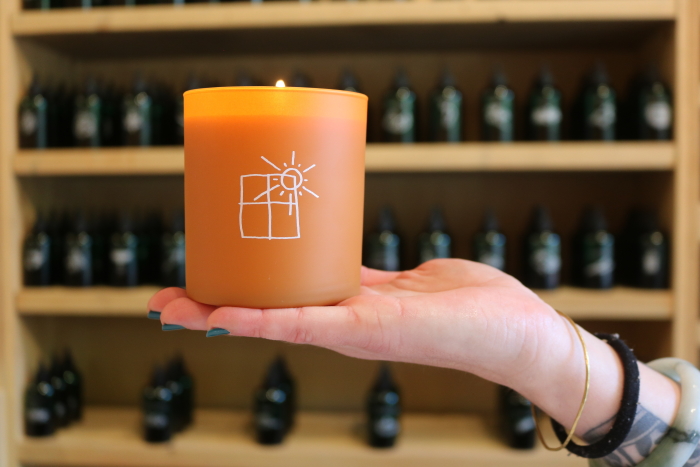 A scented candle by Mundane (Photo by Michael Turton)

Lovers of the outdoors, the couple always intended to settle in the valley. In October 2020, after they bought a house in Beacon, she began building the business in her basement and on the internet.

When the time came to open a storefront, McGill had trouble finding space in Beacon. One spot attracted 10 applicants, she said. Her broker suggested the former Goose location and she opened with regular hours in June.

Brooklyn resident Heather Byne, who often visits Cold Spring with her mother and young daughters, is already a regular.

“It’s something we can do together that’s creative and makes good use of all our senses,” said Byne. “People rarely pay attention to their olfactory sense, but it’s a great way to recreate memories.”

For McGill, reconnecting with the past is one of her broader missions. “After my grandmother passed away, I found one of her sweaters and when I smelled her distinctive perfume, it brought me right back in touch,” she said. “Fragrance is powerful.”

As reflected in the name, the store also promotes a philosophy: Dwell in the present as much as possible and make the mundane sacred by stopping to smell the roses — or the agarwood, patchouli and citronella.

“I could have called this The Scent Bar or something like that, but I wanted to make people think and hopefully realize that only our attitude makes something mundane,” she said. “We should appreciate all the little moments.”

In addition to the fragrances, she sells a pack of cards entitled Small Pleasures. Each card features a photo on one side and a word or phrase on the other, such as “grandmothers,” “old stone walls” or “a new friend.” Another card set, Everyday Adventures, suggests eating an unfamiliar fruit or buying “a toy from your childhood on eBay.”

Despite Mundane’s distinctiveness, people will continue to stop in looking for The Goose until memories fade. Many local dogs, who developed muscle memory because Burton offered limitless treats, still turn toward the shop instinctively, said McGill, also a dog lover who enjoys pampering four-legged visitors.

“I’m honored to be in this space,” she said. “People knew Leonora as a friendly personality and it’s inspiring. I hope that people will feel the same way about me.”