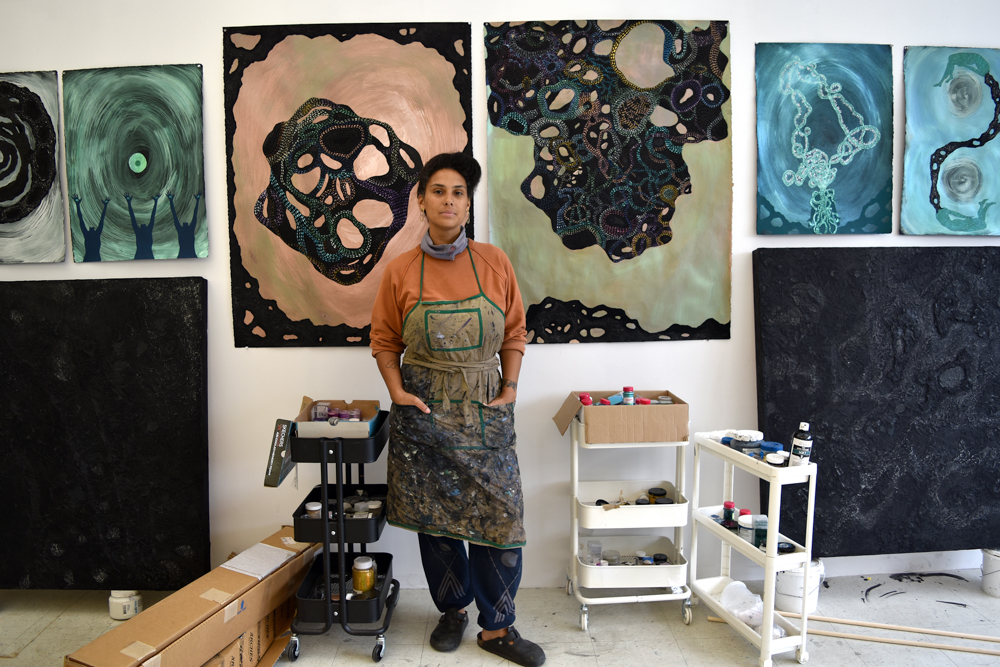 Alisa Sikelianos-Carter with some of her paintings (Photo provided)

In her mixed-media artwork, Alisa Sikelianos-Carter feels she is sharing information communicated by her Black ancestors, and their stories of resilience.

“I am them, they are me,” she says. “I have to recreate my family tree, because descendants of Africans don’t always have that information available to them. This work is that: trying to retrace those relationships.”

Her show, A Spell is a Map to What is Meant for You, is on view at the Fridman Gallery in Beacon through Oct. 30 and includes seven new works.

Sikelianos-Carter grew up in Bethlehem, New York, near Albany, and also spent time in the Berkshires and Cherry Valley, all places she says had an impact on her life and outlook. “There’s a through-line between all of those places that runs through the stars, nature and mountains. Trees were always important and inspiring in terms of the ways I think about material and aesthetic.”

She also was influenced by her experience being “a Black person in very white school. Feeling isolated informed how I saw and see myself in sometimes negative, and sometimes positive, ways. If I had grown up in New York City, my work would be different. I lived in the city for two years and found it overwhelming.”

Sikelianos-Carter, who earned bachelor’s and master’s degrees from SUNY Albany in painting and drawing, is currently based at the Headlands Center for the Arts in Sausalito, California, the most recent of nine residencies.

The artist believes she was called to make connections to those who came before by incorporating memory, the divine and, importantly, “the painful trajectory of collective ancestors in constructing new archetypes.” She has written: “I envision a cosmically bountiful world that celebrates and pays homage to ancestral majesty, power and aesthetics.”

Sikelianos-Carter says she is inspired by traditional Black hairstyles, using sources from online and printed catalogs to create with her paintings “a mythology centered on Black resistance and utilizing the body as a site of alchemy and divinity.”

Citing two of her works in the show, In Shape of My Memory 1 and 2 (see above, center), Sikelianos-Carter explains that “the black silhouettes are planetary forms. The shape, the color palette and the makers’ marks describe the beginning of this world, and the pink and green dash marks are asteroids.”

She adds: “I love the idea of a super-opulent, seductive, beautiful fantasy world. The beauty is on purpose, to draw people to it, eye-catching. It’s also about what materials feel good — delicious — physically. I want my beings to exist in an abundant world where they have everything they need, including adornment, which can be a Black aesthetic. It’s what Black Americans are bringing: a kind of glamor magic, which uses beauty to uplift and draw in.”

She enjoys show openings because she can engage with visitors about her work. “Their experience, their understanding of it, is so exciting, and is so much of why I do it,” she says. “I’m happiest when I can tell that my work has done its job, created portals for feeling it.”