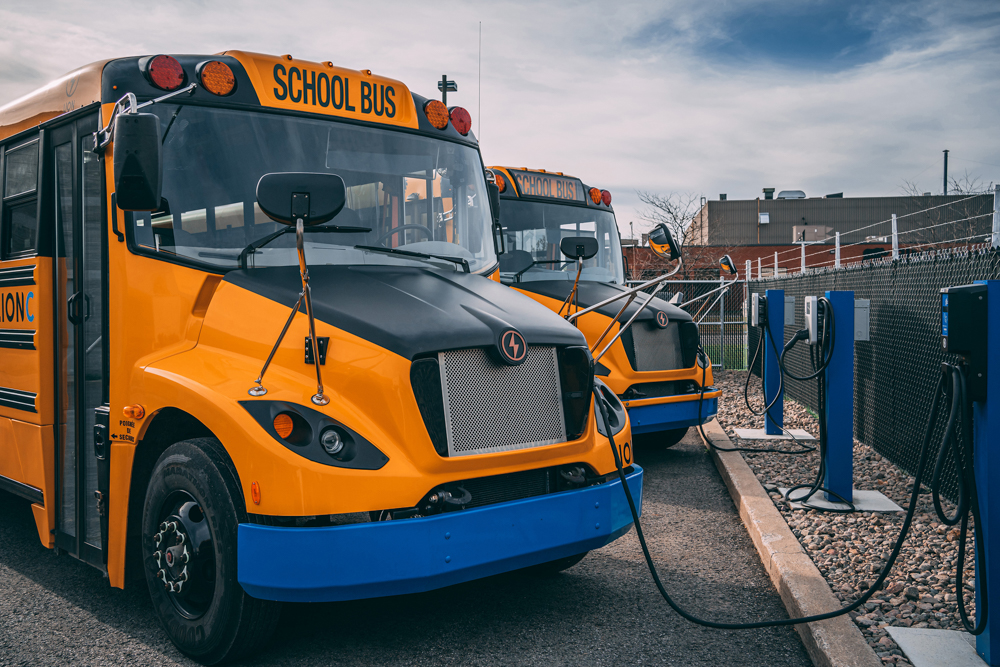 Lion Electric, a company based in Quebec, produces electric-powered buses that it hopes will soon be in high demand. (Photo via Lion Electric)

School is back in session. Energy, imagination, laughter and learning pulses in the halls and classrooms for the next 10 months. And while some schools recognize the challenge that climate change poses to students’ future and the necessity of teaching climate science and solutions, there is one glaring disconnect. For one reason or another, schools aren’t practicing what they preach.

According to New York State, our 6,000-plus public and private schools spend about $1 billion on energy each year while producing 5.6 million metric tons of carbon dioxide.

Do school districts have a responsibility to do whatever they can to reduce greenhouse emissions and sequester carbon? Of course. Not only would they be setting an example to their students and the community, the money saved by moving away from fossil fuels is important when budgets are so tight. If we can’t get teachers, staff, school boards, parents and other community members to care about the generational justice issue of our time, who will?

What would it look like to have everyone at a school working together?

For starters, parents would email district leaders and attend board meetings asking for more action. If parents don’t care about this issue, it remains lower on the priority list.

I encourage everyone to learn about and vote yes on Proposal 1 in November, which supports the $4.2 billion Environmental Bond Act that will help fund projects related to the environment and global warming mitigation. Among the list of items that could be funded are electric school buses.

Teachers should support state Senate Bill S4783A, which would require the teachers’ retirement system to divest of any source of income that profits from fossil fuels.

The district has some ability to act, but there could be much more legislation passed to help schools with the financial burden of making the transition.

The New York State School Board Association has called on Gov. Kathy Hochul and the Legislature to help districts address areas such as alternative energy sources, energy efficient technology and sustainable retrofitting or construction. Aside from building aid, there is no consistent and dedicated funding source for these sorts of environmentally focused projects.

In Garrison, where I lived until recently, the school district has already taken advantage of state funding and eliminated its dependency on fossil fuel to heat its building. As part of its recent capital improvement project, the school’s oil-heating system was replaced with an electric HVAC system. The district received $120,000 from the state’s Clean Heat Program that will be used to purchase sustainable, eco-friendly furniture for a new Learning Commons space. Additionally, the district was awarded a $90,000 state and municipal facilities grant that will be used to replace inefficient oil-heated water heaters with electric. The oil tank will be removed from the campus.

Superintendent Carl Albano said the district applied for a highly competitive Environmental Protection Agency Clean School Bus grant to purchase electric buses and will find out soon if it was selected. (The EPA says it received 2,000 applications for the $500 million earmarked for bus grants; in response, it increased the funding to $965 million for 2022 and $1 billion for 2023.)

Like Albano, Philip Benante, the superintendent at Haldane, said electric buses would be at the top of his list if grants were available. Both may get their wish: New York announced in April it plans to transition all 50,000 school buses in the state from gas to electric by 2035.

Next, they could calculate their carbon footprint and begin work on a climate action plan that could include a plan to replace oil burners with heat pumps or geothermal; phase out diesel buses; install electric vehicle charging stations for staff and visitors; convert unused lawns to meadows that don’t require mowing and can better handle water runoff and survive droughts; and switch out gas-powered lawn equipment.

The climate crisis is urgent, even if it doesn’t feel that way. Isn’t the goal of school to prepare students for the future? Let’s make it a good one.

One thought on “Living Green: What Schools Can Do”