Zines by Haldane student sell out at Split Rock

Zephyr Wayland began taking art classes at Supplies for Creative Living in Cold Spring and found one of her passions in a course for bookmaking.

Now Zephyr, a fourth-grader at Haldane Elementary, is the author of two bestselling zines at Split Rock Books. 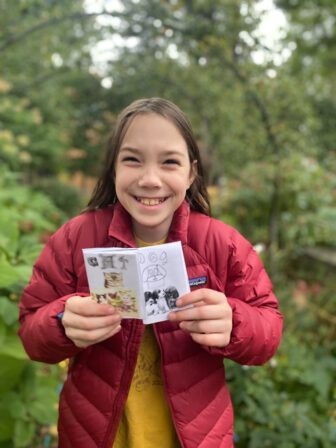 Zephyr Wayland, a fourth grader at Haldane Elementary, with her zines (Photo by V. Salas)

First popularized by sci-fi fans in the 1930s, zines (pronounced zeens, from fanzines) are self-made and self-published booklets that typically contain art and writing. Often made using copiers and printers, and stapled together or folded, they can touch on anything, such as activism and poetry to music and cats.

Grace Lo, the owner of Supplies for Creative Living, suggested Zephyr sell her zines at Split Rock. On July 29, Cat reached second place on the bestseller list for children’s books compiled every other month by The Current from sales at Split Rock and Binnacle Books in Beacon. Her zine Dog topped the list on Sept. 30.

Each zine sold for $1 and Zephyr split the proceeds with the bookstore.

“I thought it was a joke,” she said about her response when asked about selling her zines at Split Rock. “But they said it was serious, so I tried it.”

Zephyr’s zines are made using a single piece of paper that is folded into a booklet. She writes poems, mostly about animals, with drawings that fit her theme and vision. She colors in the drawings and adds finishing touches before making copies and folding. She sold out the 40 copies she made of Cat and Dog. 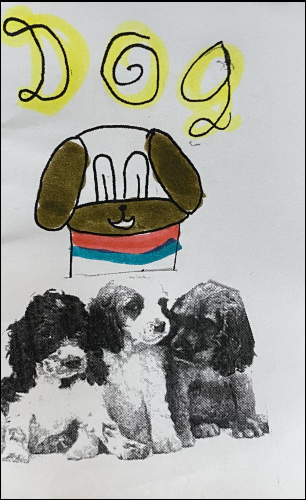 “I really want to be an artist,” Zephyr said. “In my free time, all I do is draw and sketch.”

Zines are not always easy to find, said Stephen Duncombe, a professor of media and culture at New York University, who wrote a book about them.

Now, zines have been brought above ground, with a new generation of creators writing on subjects such as climate change, food and LGBTQ issues.

They are being promoted online and at festivals and being carried at libraries and bookstores. Zine artists are exhibiting at places like the annual NY Art Book Fair and July is celebrated as International Zine Month.

Zephyr, meanwhile, is working on a new zine. “I’m still deciding what it’s going to be about,” she said.