The Haldane boys captured the Section, 1 Class D title on Nov. 5 at Bowdoin Park in Wappingers Falls. In an unusually large field (41 runners), the Blue Devils scored 47 points, edging out Leffell and Keio. 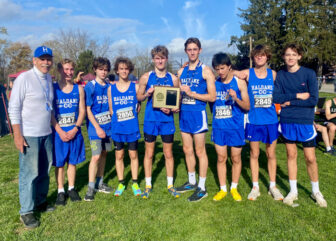 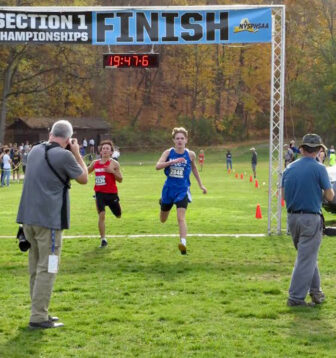 Haldane’s John Kisslinger (right) edges out Hamilton’s Miquel Gonzalez at the line for a second place finish at the Section I championships. (Photo provided)

For the girls, Helen Nichols finished third in 26:11 and Andreia Vasconcelos was sixth in 27:25. Tyler Schacht and Ada Caccamise also competed. Although Haldane did not have enough girls to field a team in the meet, Nichols and Vasconcelos will join the boys’ team on Saturday (Nov. 12) as individuals at the state meet in Verona.

Beacon’s Henry Reinke finished seventh in the Section IX, Class B state qualifier on Nov. 2 at Bear Mountain. For the girls, Rachel Thorne took the final qualifying spot. They will both race on Saturday in Verona.

“I’m excited for Henry to qualify for states for the first time,” said Coach Jim Henry. “He’s been our top runner all year, and ran a smart race to put himself in position to qualify. This is Rachel’s second straight trip to states, and this was far more difficult competition. She defended that final qualifying spot against a plethora of girls who had beaten her earlier in the season.”