In July, when the Putnam County Legislature voted unanimously to share $5 million in sales-tax revenue with towns and villages, its resolution referred to the money as an “advance” on a program that would distribute sales tax to towns and villages.

Now, it seems that the “advance” may be the only payout.

Kevin Byrne, the incoming Putnam County executive, has indicated to local officials that he opposes sharing sales tax. Unlike most counties in the state, Putnam does not distribute the sales tax to the places where it is generated. 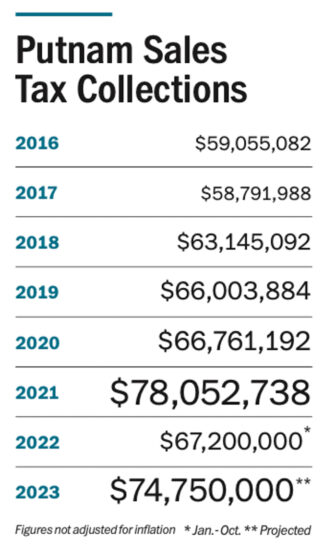 MaryEllen Odell, the departing county executive who could not run because of term limits, long resisted sales-tax sharing, and the county says it uses the money to provide services instead. But in March,  she recommended sharing, after hearing details of a proposal drafted by Philipstown Councilor Jason Angell and Cold Spring Trustee Eliza Starbuck in which the county would only distribute sales tax revenue that was in excess of the previous year’s revenues. For instance, in 2021, the county received $78 million in sales tax, or $11.3 million more than in 2020.

Byrne, a state Assembly member, ran unopposed to succeed Odell, a fellow Republican. He has been meeting with local officials before stepping into his new duties on Jan. 1.

“Byrne does not intend to share any tax with municipalities,” said Mayor Chris Winward at the Monday (Nov. 21) meeting of the Nelsonville Village Board. “He has made it quite clear to every municipal leader he has met with on this side of the county. We all, of course, explained how important that tax base is to us. And he is not interested.”

Similarly, Philipstown Supervisor John Van Tassel told the Town Board on Nov. 3 that “it seems Byrne is not going to share” sales tax.

“I still think [sharing] is a great idea that he would, or should and could” support, Van Tassel said. If Byrne wants “to say ‘we’re going to give you services instead,’ I want to see real services come to town. We send a lot [of money] over and because there’s no sales-tax sharing, not a lot comes back.”

Calling Philipstown, which includes Cold Spring and Nelsonville, “the tourist-draw for Putnam,” Van Tassel said the community requires county help and “I’m going to hold him to [supplying] it.”

“We desperately need a shared-tax revenue stream, especially when we are generating a lot of the revenue here,” Winward said Monday.

The resolution adopted unanimously by the county Legislature on July 5 stated that local and county officials were “working together to explore the viability of a sales-tax revenue sharing plan within Putnam County in the future” — the share-the-growth proposal was not mentioned specifically but has been the only plan under discussion — and that “in advance of the final implementation of such a plan, Putnam wishes to allocate $5 million of sales-tax revenue to be shared with its towns and villages” on a per-capita basis in 2022.

Of that total, Philipstown would get $369,670; Cold Spring, $101,671; and Nelsonville, $31,945. The Legislature also unanimously approved a distribution of federal pandemic relief funds, in comparable amounts.

According to the resolution, the $5 million must be spent by June 30, 2026, “with a focus on infrastructure, mental health, substance abuse, food insecurity, clean water, roads, bridges and buildings to aid in the recovery from the COVID-19 pandemic.”

As Byrne noted in an email to The Current, while the resolution alluded to a plan to share sales taxes, it did not create one.

He described the $5 million allocation as a “one-shot, with no language committing to a ‘share-the-growth’ plan.” Moreover, he said, “no such plan or commitment to ‘share,’ ‘divert’ or ‘pass along’ sales-tax revenue to other government entities was ever codified or voted on by the county Legislature.”

Still, the Legislature seemed to be on board with the idea. Legislator Neal Sullivan of Carmel-Mahopac, who chairs the nine-member Legislature, said July 5 that “we should continue to share sales tax today and going into the future, because we’re over our estimated budgeted amount. If we can share, we should.”

He predicted that “with some of the new commercial development projects recently opened, we will continue to see increased sales tax. I look forward to being able to share it with our local taxpayers.”

Legislator Carl Albano of Carmel pointed out that when Putnam shares sales tax, “there’s a negative effect” on county finances, and that the county aids municipalities in various ways, such as covering community college fees. Nonetheless, he said he supported sharing some sales tax. “This is going in the right direction and these are the right things to do, and I’m all in favor.”

The county does appear ready to distribute the promised advance. On Tuesday, (Nov. 22), Winward said Putnam had sent Nelsonville an intermunicipal agreement on handling sales-tax money and pandemic relief funds.