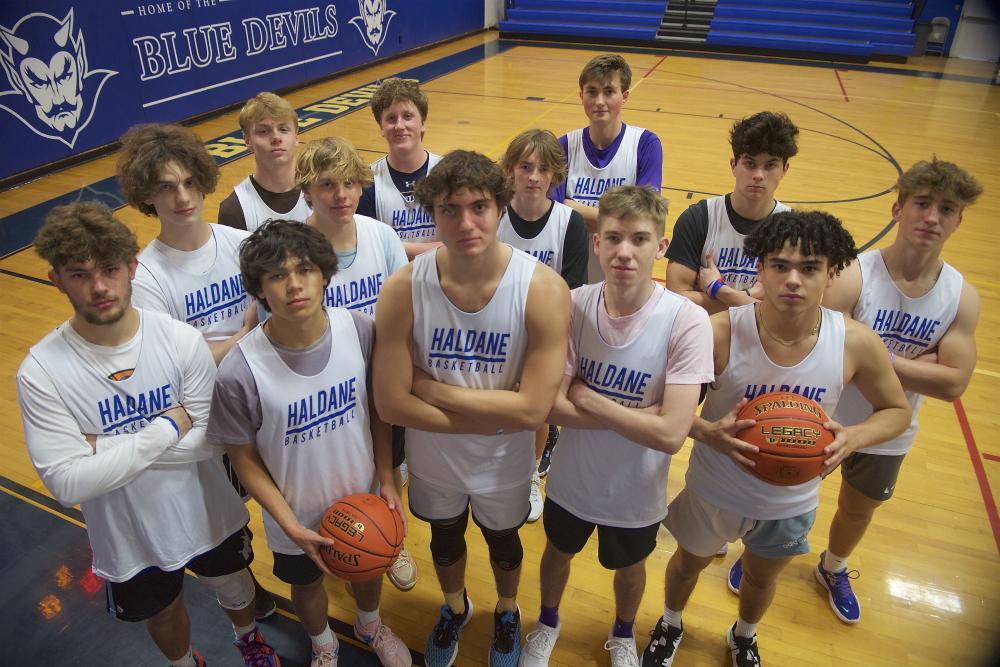 Haldane will chase its first sectional title since 2016. (Photo by S. Pearlman)

The day before the Blue Devils’ season-opening, 71-38 win on Thursday (Dec. 1) at Marlboro, Coach Joe Virgadamo called his team — which includes seven seniors — a “special group.”

Haldane last won a Section I, Class C title in 2016, meaning no current player has been able to hold up the award — on the basketball court, anyway.

Two returning players — Ryan Eng-Wong and Matt Nachamkin — last month won a state title with the boys’ soccer team, and the buzz from that achievement continues to light up the campus.

“We have two state champs on the team,” said Virgadamo, who is in his 17th season. “We’re hoping that’s contagious.” 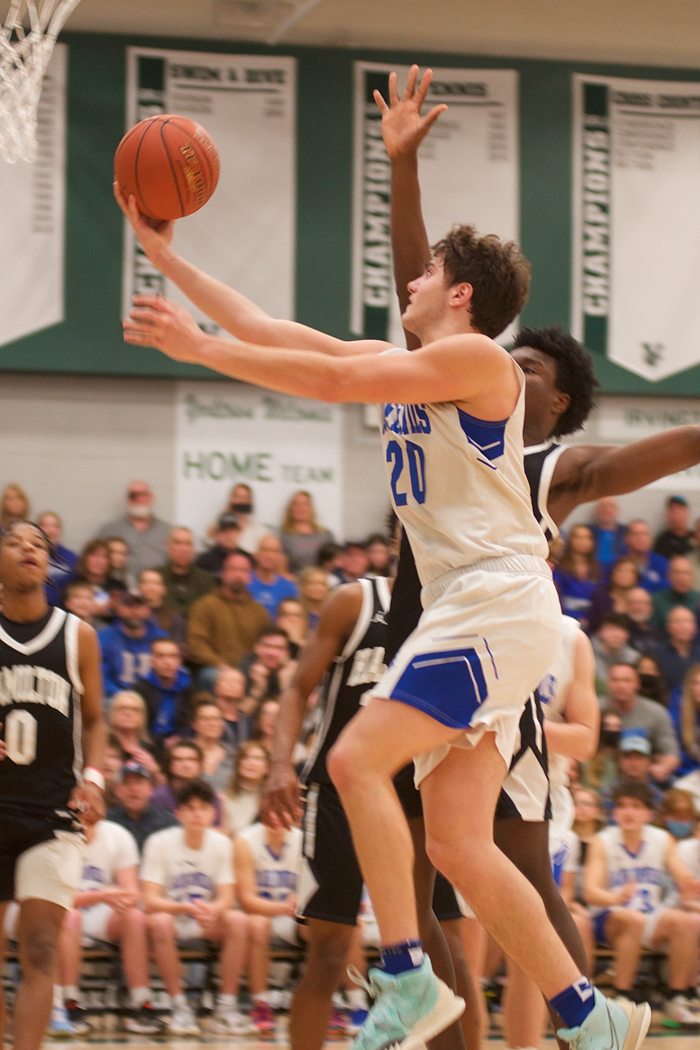 Matteo Cervone goes to the rim during the sectional title game in March. (File photo by S. Pearlman)

The heart of the 2022-23 team is 6’5” senior Matteo Cervone, a fourth-year player. As Cervone goes, the Blue Devils will almost certainly go.

Cervone showed what he can do last season, earning All-Section honors. But the Blue Devils, who had lost only two games all season, fell in a heartbreaker, 53-51, to Hamilton in the sectional title game. (The other Class C teams in the section are Tuckahoe and Leffell.)

“I’m coming in with a bit of a chip on my shoulder,” Cervone said. “I feel like last year I could have done more to win sectionals, and I’m excited about making that happen with my best friends, guys I’ve been playing with since we were 8. We really want to do something memorable.”

“Matteo has put the work in and helped build the program to where it is now,” Virgadamo said. “Matt Nachamkin has put a ton of time into his game, Will Bradley is back, and Julian Ambrose will also be a key. These guys haven’t missed an open gym. They’re leading our program. And our bench will be big — Evan Giachinta, Michael Murray, Ryan Van Tassel. We’re a deep team.”

Beacon, which finished 12-9 in 2021-22, closed the season with a loss to Washingtonville in the Section IX, Class A playoffs. 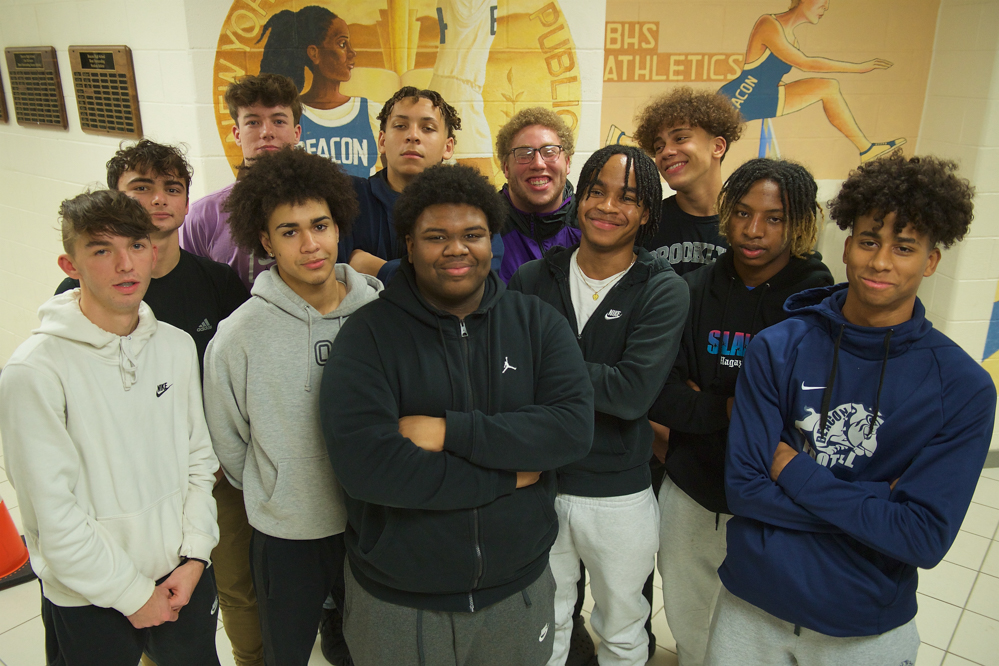 Beacon, which enters the season with a new coach, hopes to improve on last year’s 12-win winter. (Photo by S. Pearlman)

Schetter, a 2014 Beacon grad and three-sport athlete, was the varsity assistant last season and coached the junior varsity for two seasons before that. He won a Division III national championship in his freshman year playing baseball at SUNY Cortland but said he’s always loved hoops. “I’m excited to be back here, where so many people helped me,” he said.

“We’re athletic, with a lot of size and a lot of speed,” Schetter said. “Everyone can handle the ball and shoot. We’re going to play with a lot of energy and a fast pace. These guys play their best when we’re moving the basketball well.” 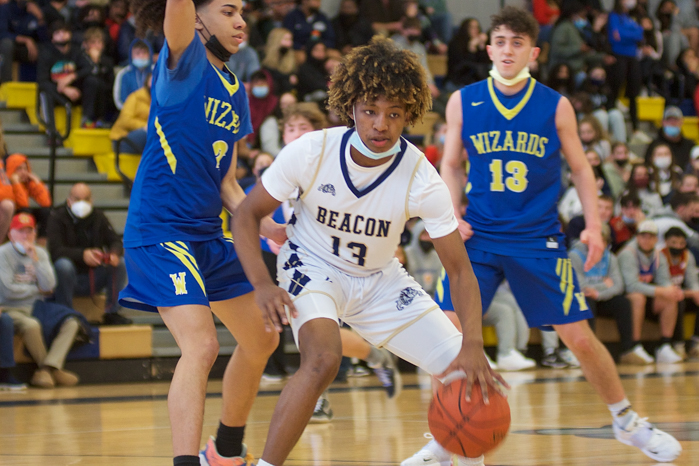 Darien Gillins, shown in a playoff game, is expected to be a key scorer for the Bulldogs. (File photo by S. Pearlman)

Defense will spark the offense, he said. “We know we’ll have to make adjustments on the fly, but right now we have a defensive-minded team.”

Beacon is scheduled to open its season today (Dec. 2) at Chester.