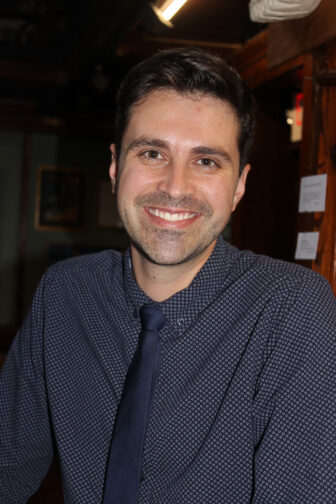 What were your duties at Legoland?

I was the head of entertainment and events, so my responsibilities included all the shows, the meet-and-greet characters, the “edu-tainment” in which performers in costume tell stories. It’s a story-driven, actor-driven experience. And we also organized everything from the grand opening in April [2022] to the Fourth of July to Halloween to the holiday events. I was hired in 2018 before Merlin Entertainment had even prepared the land to construct the park, so initially I spent a lot of time going into the community. There were some groups opposed to the park, but I mostly encountered overwhelming support for what was coming. As Merlin started to build, they needed an entertainment manager and then a resort experiences manager and then a senior manager.

How did you feel the day the park opened?

Well, I was responsible for that whole party, so it was stressful. I don’t know that anybody would have said that I looked thrilled. The moment that I finally felt joy and relief wasn’t until later that night when the press photos [of the activities] went out. I felt we had captured the joy and excitement I had been feeling during the process and now could share with people, including the artists. A themed entertainment park needs an incredible amount of artists.

Where did you grow up? Did you play with Legos as a kid?

Southern California. They were part of my childhood, but I wouldn’t call myself a fanatic. As a young adult, I lived all over: Arizona, Michigan, Idaho, Nebraska and Washington. Eventually, I decided that I needed to get to the East Coast because I was a theater artist. I mostly write, and mostly for young audiences. I’m a member of the Dramatists Guild of America.

Have you been back to Legoland as a guest?

Yes, because my 15 nieces and nephews came to visit. But my experience was not what they experienced. For starters, I know things like what color that block was supposed to be [laughs], and the blood, sweat and tears that went into making each element. It will be interesting to go back in five years because by then it will be a different park, with a new set of attractions. Themed entertainment parks are only as successful as their ability to grow and develop, so people will come back.

You were recently named the executive director of the Orange County Arts Council. Any similarities in the jobs?
My career path is maybe more logical than it seems. At Legoland, we were providing this immersive entertainment experience. You see dancers and musicians and actors and rides, all designed to be escapist. These same things are important to the arts community. Now I want to supply artists and entertainers not just to Legoland but to the entire community. There’s still an issue with people thinking that the first place for budget cuts is the arts, because so little is usually spent there. That’s also one of its positives: It doesn’t require many resources to create amazing art. But you’re investing in human creativity and imagination, and the more you invest, the more you will get out of it.