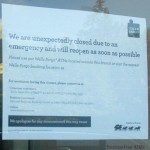 The Cold Spring branch of Wachovia Bank closed unexpectedly on Tuesday (July 20) after an unidentified odor prompted the staff to alert the fire department, which responded and discovered nothing hazardous on the premises. The bank anchors the north end of the Foodtown plaza on Chestnut Street. Two Wachovia employees were stationed outside the branch, informing customers why the bank was closed. Shortly before 3 p.m., a few hours after the incident, the bank remained closed, although the ATM in the vestibule continued in operation.

According to Cold Spring Fire Company Captain Matt Steltz, the call came in at 10:28 a.m. “They said there was a smell of propane” or something similar, he told Philipstown.info on Tuesday afternoon. An investigation revealed “it was not any kind of combustible gas.” The source was “unfound” at the time the firefighters left, about 30 minutes after arriving. He said the odor came from the bank’s ventilation system and that the matter had been turned over to the Wachovia maintenance service for follow-up. “It was some sort of harmless odor, even though it was a pain to smell,” Steltz said and “we did a pretty extensive search” of the bank area.

Wachovia spokesperson Fran Durst had no additional information as of 2 p.m. Tuesday. She said that she did not yet know when the branch would be able to reopen. Efforts to contact her by telephone later in the afternoon generated a “busy” signal. The Cold Spring Police Department also could not be reached for comment.

Kamel Jamal, owner of Angelina’s Restaurant immediately adjacent to Wachovia, said that the Cold Spring Fire Company also inspected his store and found nothing out of the ordinary. Jamal said that one of the firemen commented that the odor detected in the bank was similar to that of “burned hair.”

A couple of doors down, the receptionist at Roberts Total Care hair salon said that the odor remained a mystery and was not linked to her shop. The businesses have different ventilation systems, she said, declining to give her name. “The fire department was here, the police department was here,” she said. “They came in and checked here. It didn’t smell like burnt hair. It smelled like ammonia. It was pretty strong.” She said the beauty shop had not handled any perms that morning.

By mid-afternoon, no odor was detectable, at least not in the bank vestibule or nearby businesses.  “We are unexpectedly closed due to an emergency and will reopen as soon as possible,” a sign on the door announced. “We apologize for any inconvenience this may cause.” The bank opened for regular business on Wednesday.