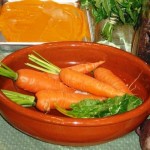 Words of advice from chef Mark Gandara to the roomful of cooking aficionados at his seasonal cooking workshop at Glynwood Farm this past Saturday. Advice that really didn’t need to be given, as the attendees were already mesmerized by the colorful visuals, complex aromas and saucepan melodies coming from the demonstration table at the center of the room.
This particular workshop was conceived as a way to present recipe ideas and techniques utilizing some of the more infrequently cooked vegetables which turn up in CSA (Community Sponsored Agriculture) farm shares at this time of the year.  So that instead of holding up a large bunch of swiss chard and feeling defeated by it, one can actually turn it into a tasty gratin with tomatoes, garlic, and parmesan, for example. 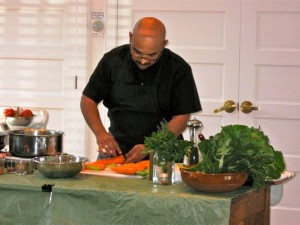 Mark, who conducted the class with the assistance of his wife, Sunny, a certified wine educator, began with a synopsis of his fascinating career. Born in Texas, he grew up in a family of men who “worked with their hands. My father was a draftsman, my grandfather a cabinet maker. I was drawn to cooking and always had a passion for it.” He left Texas for the first time to attend Hyde Park’s Culinary Institute, and immediately fell in love with “springtime, the trees, the river.” After graduation he returned to Texas, where he moved up the chain: line cook, sous chef, executive sous chef, at Dallas’s Star Canyon Restaurant, which was an originator of the Southwest cooking movement. (“I don’t even know if there is a color of green for how green I was). New York beckoned him back, and a job as a line cook at Union Square Cafe (with only four line cooks: pasta, saute, meat and fish, and little turnover, he felt lucky to get the job) gave him his first experience with greenmarkets. “As sous chefs, we were encouraged to go to the market before work, and get whatever was local.” A stint at Aquavit exposed him to Scandinavian cuisine and the techniques of preserving and pickling. Italian cuisine took front and center during his tenure at Alto as sous chef. His last position in the city, participating in the re-opening of the Russian Tea Room, added menu planning and the blending of traditional and updated styles to his repertoire.

In 2007, Mark and Sunny, who is Norwegian-born, moved to Nelsonville, after a first-year anniversary weekend trip to Cold Spring, (staying at the Pig Hill Inn) enchanted them, with views reminding them of the fjords. Initially working at the Valley Restaurant, at Garrison Golf Course, Mark and Sunny took the plunge and started their own catering business, Fork and Glass, LLC, in 2008.  Last year Mark and Sunny got heavily involved with Glynwood Farm, and they sing the praises of the vegetables, chickens, eggs which Glynwood produces Fork and Glass specializes in food and wine pairings, using both Mark and Sunny’s expertise.  They place an emphasis on education, with Sunny frequently conducting a tasting session for clients, and Mark preparing food to match the wine.  They find that their clients are curious about where their food is coming from and are “not interested in just blindly consuming it.”  They have a local clientele, with many people from the city with second homes here, and also a constituency in Westchester. 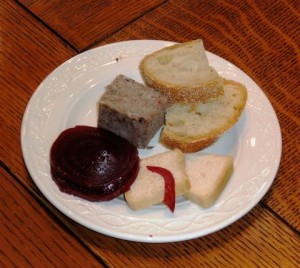 Presentation of one of the Chef's dishes.

On Saturday’s menu was a threesome: Scandinavian pickled beets, cold Moroccan carrot soup, and the chard gratin. Throughout the two-plus hour session, Mark imparted technical advice: “Japanese knives are better for finesse – the thinner knife blades maintain a finer edge; German knives are good for making larger cuts.” He demonstrated the folding of parchment “cloches” to use as substitute pot lids. He provided information on the best places to buy supplies and spices, both locally, in the city, and online, and, of course, managed to juggle the preparation and cooking of three dishes without any apparent frazzling of nerves. The overall effect was of having a master chef cooking show unfold in front of you; one almost expected cameras to be rolling. The “audience,” many of whom were participants in Glynwood’s CSA program, asked questions throughout.

At the end of the class came the great reward, the tasting of the dishes.  The cold carrot soup was incredibly creamy, despite being made without butter; the beets, paired with pâté, had a refreshing zing to them, and the chard gratin was earthy and satisfying.
Along the way, we were treated to amusing anecdotes about equipment failures (“it’s always the thermo-coupler. Who knows what that is, but it’s always that”); kitchen mishaps; and some secrets revealed: chef Gandara’s favorite thing to cook: huevos rancheros; guilty pleasures: popcorn with lots of salt, and the very epicurean peanut M’nMs!  Want to flip a perfect omelet: “practice the motion with a teflon pan and beans.” Sunny told of the first time she cooked for Mark, “I was nervous to cook for him.  I made him a sauce.  He ate it with a big smile on his face, but I know it wasn’t that good.  He was just happy to have someone cook for him.”

Mark and Sunny will be offering more workshops at Glynwood on August 21.  The morning class will again feature the season’s bounty: corn, tomatoes, zucchini, while the afternoon class, conducted by Sunny, will cover Hudson Valley wines and pairings. For information visit glynwood.org.
The mission at Fork and Glass, is “local ingredients, international flavors.”  They cater parties, events and in-home meals, and can be reached at 914.482-1709; learn more about them at forkandglass.com.   At the end of the class, one participant approached Mark and Sunny and asked them if they’d be willing to cater for her by walking through her garden, picking out ingredients, and creating a meal.   It seemed like the very embodiment of what they seek to do.

Mark Gandara generously has written down the Farm to School recipes for us.

Preheat oven to 350 Degrees.  Cut butternut squash lengthwise in half.  Clean out the seeds using a large kitchen spoon. Take each half and lay them on a baking sheet, cut side up.  Sprinkle olive oil salt and pepper on the squash, stuff cavity with the fresh herbs.  Turn Squash cut side down and place into oven. Roast for 45 minutes to an hour, until Squash is soft to the touch.

Remove from oven, let cool enough to handle. Scoop flesh out of skins into a big bowl, season with salt, pepper, cinnamon and maple syrup to taste. You can either use a potato masher or a blender to turn squash into a smooth puree. Taste for seasoning and adjust accordingly.

Rinse broccoli and trim if needed. Place a pot filled with salted water over high heat, bring to a boil, add broccoli and boil gently for 3-4 minutes or until vibrant green.

Preheat oven to 400 degrees. Combine all spices and add into a dry sautí© pan and toast over medium heat till fragrant, remove from heat. Line a cookie sheet with foil. With a sharp knife, carefully cut the pumpkin in half lengthwise. Discard seeds (or save to make roasted pumpkin seeds).Place pumpkin on foil lined cookie sheet cut side up and rub cavity with olive oil, season with salt & pepper and toasted spices(you will not use all of the spice mix). Place in oven and roast for 45 min to an hour or till pumpkin is soft to touch. While pumpkin is roasting place milk in saucepot along with 1 teaspoon of spice mix and bring to just under a boil. Remove from heat. Once pumpkin is done remove from oven and allow to cool for 15 min. using a kitchen spoon scoop the cooked pumpkin flesh into the cup of a blender and add warm milk to blend until smooth and until you reach the consistency and thickness you want. Repeat process until all pumpkin is pureed. Add sugar and season with salt & pepper.