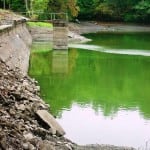 The Cold Spring Water Department announced Monday night (Aug. 16) that it had shut down use of the reservoir system and begun “utilizing its emergency connection to the New York City Aqueduct water supply, effective immediately.” Facing estimated costs of $13,000 a month for aqueduct water, village officials urged consumers to conserve and warned of a possible ban on outdoor water use if voluntary conservation efforts, including curtailment of lawn watering, prove insufficient.
The aqueduct, overseen by New York City’s Department of Environmental Protection (DEP), draws water from sources in the Catskills and passes through Philipstown near the Cold Spring water treatment plant on Fishkill Road. Like water from its own reservoirs, the aqueduct water must be processed at the treatment plant. Water Superintendent Greg Phillips told Philipstown.info that this is the first time since 1997 that the system has had to tap into Catskill water.
With consumption up in the extra-hot weather and replenishment from rainfall low, the switch-over followed inspections of the reservoirs by Phillips and Bart Clark, an engineer who advises the village. Phillips said that between June 1 and Aug. 15, the system used 22,400,000 gallons of water but its watershed received only 4.5 inches of rain. With that situation, “it was really only a matter of time,” Phillips said. “We’d drawn the water level down more than eight feet, and what is left has a higher temperature and increased algal growth.” According to the water department, average daily use in June was 283,000 gallons, which spiked to 304,000 gallons during the first two weeks of August.
A water emergency imposed on July 9 by Mayor Seth Gallagher  continues to limit outdoor water usage to the hours between 7 p.m. and 7 a.m., with customers now also asked to stop watering their lawns and engaging in similar uses. The Cold Spring village code allows the Village Board to institute a complete ban on outdoor usage. “We have had restrictions and bans in the past, but were able to stave off use of the DEP supply, as rains picked up,” Phillips said Aug. 17. “We typically have only had issues in August. This year, August seemed to start around June 15.”
When operating normally, the Cold Spring water system relies on three reservoirs. Divided by a dam,   the Upper and Middle Reservoirs in North Highlands resemble a small, single lake, bordered by another dam at the rim of the Middle Reservoir. They feed Foundry Brook, which courses down to the Foundry Brook Reservoir, on Fishkill Road.
In a small upside to the downside, the depleted water may aid in maintenance and related work. “I am looking into what tasks we can perform while the reservoir is low,” Phillips said. “We will be clearing silt from the coffer dam — concrete box/retaining area on Fishkill Road at the head of the Foundry Brook Reservoir — while there is no flow through the brook.”