The Town of Philipstown has filed an appeal of a court order that it issue a zoning variance for a used-car lot along Route 9 in Garrison. Filing of the appeal stays the ruling, or prevents it from taking effect, in light of the ongoing questions raised.
In a 4½  page, double-spaced decision — notably short for a judicial document — New York State Supreme Court Judge Francis A. Nicolai on July 26 described denial of a variance as “arbitrary and capricious.” He ordered the town’s Zoning Board of Appeals (ZBA) to grant it “so that [the] petitioner may continue his business.” (Unlike other states, New York calls its lower-level courts the “supreme courts” and uses the term Court of Appeals for its highest court.)
Philipstown Supervisor Richard Shea said Aug. 25 that soon after the ruling the Town Board authorized the town attorneys to proceed with further litigation in the case, Garrison Contracting Inc. (petitioner) versus Town of Philipstown Board of Zoning Appeals.
The proprietor of Garrison Contracting, Kevin Jones, brought legal action against the ZBA in March, approximately five months after the ZBA unanimously rejected his petition for a variance. He sought it to allow parking within 41.7 feet of the center line of Route 9 and 20.9 feet of its street line, creating 23 spaces, 18 for used autos and five for customers at his property, located at 1315 Route 9, across from the Stadium restaurant. After acquiring the site in 1999, he opened a home heating stove and coal business, which the ZBA regards as appropriate. 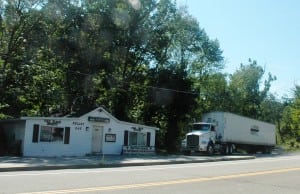 1315 Route 9, the site of a court battle over creation of a parking lot to accommodate a used-car business. (Photo by Liz Schevtchuk Armstrong )

Nestled along a curve on Route 9, the property also lies along Diamond Hill Road and Annsville Creek. As part of the changes, Jones proposed to remove a large rock and seven trees and alter the grade of the land.
Judge Nicolai determined that “the board acted in an arbitrary and capricious manner in not granting [Jones’] petition’s parking variance.” He said the ZBA “was aware that petitioner’s business involved the sale of used cars. Vehicles must be displayed to be sold.” He also pointed out that the Stadium, “the restaurant directly across from petitioner, has parking spaces for 82 cars. All of which parking spaces are not within the required setback and many of which front directly on Route 9.” The judge also mentioned Jones’ claim that the ZBA “failed to conduct the required balancing test and failed to consider the `five factors’ which it is required to examine and address” and suggested that “by changing the grade of the land, snow removal would be better and no run-off ice would go into the road bed. Also, by using large, graveled areas better drainage would result.”
However, transcripts of ZBA meetings show that board members went over the “five factors” involved in granting or denying the variance and also discussed the situation of the Stadium. ZBA Chairman Vincent Cestone acknowledged Oct. 26 that the board granted the restaurant a variance but said that the changes made by the Stadium resulted in an overall “decrease in non-conformity” with zoning law. “It wasn’t an increase” in non-conformity as Jones proposed, Cestone said. He noted that the ZBA also had denied a request by the Appalachian Market gasoline station, at Routes 9 and 403, to increase the amount of its non-conformity along Route 9.
The ZBA conducted five public hearing sessions, generating some 73 pages of comments, between May and October 2009. Although at least eight neighbors or other Philipstown residents strongly questioned or opposed Jones’ variance, it appears neither anyone from the community or from the local business sector came forward to support him. As reasons for their concerns, neighbors cited likely ongoing damage to the stream and wetlands, including run-off of oil and other liquid from parked cars; safety hazards from parking and related activity close to Route 9, given its curves and sight-line limitations; adverse effects, including pervasive light pollution, on nearby farms and residential areas from a used-car dealership; and similar negative repercussions.
Before denying the variance, the ZBA considered five factors, reflecting those covered in Jones’ application: the impact on the character of the neighborhood; what alternative approaches the applicant could take to accomplish the same goal were the variance denied; the size of the variance; the environmental ramifications; and whether the need for the variance resulted from a self-imposed hardship.
At least two board members asserted Oct. 26 that Jones had brought on a his problems himself by attempting to expand from his home heating and coal business to a used-car dealership on a property not suited for it. “He can operate the business that he has, it would be no hardship for him as far as financial,” ZBA member Robert Dee said, maintaining that difficulties only arose when Jones “wanted to do another business at that location.”
But one of Jones’ attorneys told the ZBA on Oct. 5 that “if this variance is not granted and the town persists in its action to fight with my client “¦ he will be put out of business. There will be no use of the property whatsoever.”