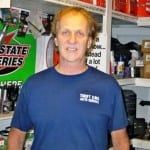 Is there someone in one of our local stores or businesses who always makes you feel welcome, or well taken care of?  In Philipstown, we often interact multiple times daily with people we don’t know much about, but whose company we enjoy, even though briefly. This is the second of a series of stories about that interesting person, Behind the Counter.  The first featured Michelle Risko of Yannitelli’s (look for it in the People/Passages section). The first few will be chosen by the People/Passages editor.  After that, we hand it over to you; please email your suggestions to [email protected], and we’ll turn the spotlight on your choices.

3 thoughts on “Behind the Counter – Harold Garrabrant at Thrift King”