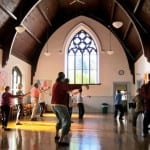 “I don’t do it because it’s popular, but because I need to”

When the people involved with Philipstown’s Tai Chi classes contacted Philipstown.info about how best to inform the public about their program, they were asked, with an eye toward placing them in the right category,  “is this ongoing, or a series of classes?”  The answer wasn’t straightforward, and, in its simplicity and complexity, is somehow emblematic of Tai Chi itself.
The simple answer is “both.”  As instructor Teresa Peppard explained it, the classes are ongoing.  Yet, as Tai Chi consists of a series of moves which should be learned in sequence, novices should begin at an appointed time, which, in this instance is this coming week.  There is often a second opportunity during the winter. There are 108 sequential, choreographed moves, to be specific. These moves are much easier to learn, according to Peppard “if you develop a Tai Chi body. It’s hard to learn the fundamentals of form and choreography at once. You continue to learn the form for years. You learn it at a certain level then deepen the level; there’s always more to learn.”
Peppard, who had previously studied other martial arts in her twenties, began learning Tai Chi in her early thirties, “wanting to heal things in my body,” which she gives as a frequent reason people turn to Tai Chi. “I loved the slowness and awareness—getting to know my body at a different frequency.  When I began, I didn’t know how profound the journey would be.” When asked to describe Tai Chi, she invoked a Daoist saying: “Those who know do not speak; those who speak do not know,” adding “to really know Tai Chi is to practice Tai Chi.”  However, she attempted to break down much of what Tai Chi encompasses: 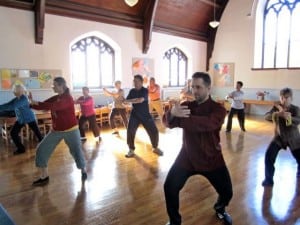 Physical:  “Coming from a physical plain, Tai Chi involves balance and flexibility. It puts healing back in your own hands.”  Tai Chi is frequently recommended by the “medical establishment for conditions such as fibromyalgia,” and that component “makes it a big draw in the US.”  Describing this age of technology’s predilection for turning us into “heads with hands, with a loss of connection to the ground,” Peppard notes that Tai Chi is “leg intensive; it brings the whole body into it and then stimulates the mind.”

Mental:  Peppard describes Tai Chi as a “moving meditation. Instead of using breath as your ‘returning,’ you use movement.  Your mind is clear, mental focus sharpens away ‘monkey mind.'”  She adds that learning the choreography and memorizing the sequences and a new way of moving is great for seniors, and that the martial aspect, involving strategy and tactics, can also stimulate your brain.

Spiritual:  In Peppard’s word’s “the spiritual, sometimes comes later.  The base is Daoist thought.  The cyclical philosophy of Dao is encoded in movements of the form.  I find myself describing something physical that actually is a philosophy.  You do the practice and it slips in on you.  The movement of the form become the metaphor of your body/mind.”   Class participant Katie Brennan echoes these words. Leaving the Saturday class Philipstown.info visited, she was eager to share her thoughts: “I’ve been doing this for 11 years and it has changed the way I live.  You discover your body and then your mind follows. It’s subtle.”

Peppard, who has been teaching since 1996, continues to study herself, taking classes in New York City with fourth-generation Master Alex Dong, whose practice, she says “really embodies the philosophy of Tai Chi.” 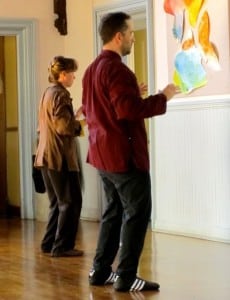 Peppard’s Tai Chi classes attract students of all ages. Most tend to be in their thirties and beyond, as responding to the slower movements is something that the very young are not always open to.  Although kids are welcome, Peppard says, “they tend to move fast—it’s not natural to them to go slowly.  They can try, but it generally doesn’t work.”  Accoding to Peppard, it’s not for all adults, either.  “Some adults don’t care for the slowness.”  Still, the classes are popular and build largely through students bringing in other students.  Class size generally ranges from 10 to 18 participants. As for conducting the classes, Peppard says “I don’t do it because it’s popular.  I do it because I need to.”
At this past Saturday’s class at St. Philips, students were effusive in their praise for their teacher, and were eager to articulate what Tai Chi has brought to their lives, with comments ranging from the practical: “it’s made my balance much better”; “when you’re fishing, standing on slippery banks, it helps you keep your balance”; “it helps with mental focus, blending the mind and body together”; “this attracts wounded birds with injuries—this gets you into moving your joints and starts as primarily exercises, [then the] spiritual aspect creeps in.”  As ‘Don,’ a participant explained it, “We all stand in a circle.  The natural thing is to gravitate to rectangles.  This is an introduction to everything circular—one fluid continuous flow.  This will work until the world becomes square.  Then we’ll have to rethink!”
Peppard says that promoting the classes she guides at three locations is the most difficult aspect of teaching.  She expresses this in an eloquent way, though, “promotion is hard, but rivers need a source.”  Classes are ongoing, and take place on Thursdays at 9am at The Garrison Institute, Saturdays at 9am at St. Philips Church in Garrison, and Mondays at 6:30pm at Fishkill All-Sport at 6:30pm.  Classes for first-timers begin this week.  The cost is $10 per class, and class cards are available, through which class members can substitute a class at another location.
For more information, or to let Teresa Peppard know that you’ll be attending, just give her a call at 914.204.3619.

One thought on “Tai Chi Classes Begin (and Continue) in Philipstown”