Reporter’s Note: This article draws heavily upon an interview with Donald Lusk’s wife, Wanda, who graciously and candidly provided personal information about Donald, his life, his illness and his death. Most of the information regarding bipolar disorder comes from the National Institute of Mental Health.

On the afternoon of Friday, Aug. 13, 2010, 50-year-old Donald Lusk took his own life at his home on lower Main Street in Cold Spring. Up until that point, when Lusk acted out or acted up, his behavior was often dismissed by some people with comments such as “That’s just Donald being Donald” or “He’s just crazy” or “Donald, go take your meds.” Only with his death did some of us try to understand who Donald Lusk really was. Perhaps it’s time we all did. 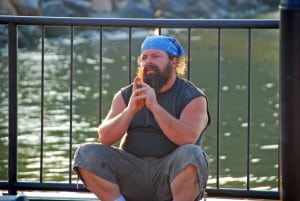 Donald Lusk at the Cold Spring waterfront in 2007

Donald Lusk wasn’t “just crazy.” That’s a term that easily slides off the tongue when we don’t understand, or are uncomfortable thinking about, much less talking about, mental illness. And Donald Lusk was never “Just Donald being Donald.” While his character was truly unique, his condition was anything but. In fact, Lusk suffered from bipolar disorder, an illness he shared with 5.7 adult Americans, about 2.6 percent of the U.S. population. An American city of that size would be second only to New York City.

Bipolar disorder is also known as manic-depressive illness. The National Institute of Mental Health (NIMH) describes it as “a brain disorder that causes unusual swings in mood, energy, activity levels and the ability to carry out day-to-day tasks.” Manic depressives are not people feeling a bit down because it’s Monday and they’d prefer not to go to work, any more than they are folks feeling really up because their team just made the World Series. The symptoms and effects of bipolar disorder are severe and can badly damage relationships, and cause inability to perform at work or in school.

According to Hope Torino, a Cold Spring-based psychotherapist, recent findings indicate that among mental illnesses, bipolar disorder is statistically the most likely to result in suicide. Bipolar disorder is characterized by manic or high periods and by depressive or low periods. Torino says that those suffering from the disorder can experience either the manic or depressive state – or both. There is also a phenomenon known as “rapid cycling” in which someone can shift from manic to depressive several times in a day, or even within a single hour.

In many ways Donald Lusk was a textbook example of bipolar disorder. The illness often develops in early adulthood. Lusk became symptomatic in his mid-twenties. His symptoms on both the manic and the depressive side of the illness mirrored almost exactly those listed on the NIMH website. On the manic side he experienced long periods of feeling overly happy and outgoing. He talked fast, then, leap from one idea to the next. He was easily distracted. He was known for often beginning new projects. He was restless. He got little sleep. He sometimes had unrealistic belief in his abilities.

Impulsive behavior, sometimes in the form of spending sprees, can also be part of manic bipolar behavior. For Donald Lusk that spending was directed toward music. “I’ve found guitars I didn’t even know he had. Expensive guitars. Thirteen that I know of so far. And bongos. And a keyboard. And a mixing board. He had a whole studio,” his wife Wanda said.

When experiencing the depressive side of being bipolar Lusk’s symptoms were also classic. He suffered long periods of feeling worried. He felt tired. He had problems concentrating and making decisions. He lost a lot of weight. He even lost interest in his favorite activities. “Donald lost all interest in music during the last year,” Wanda said. Anyone who knew Donald Lusk at all knew he loved music. Talking about suicide can also be a common symptom of depressive bipolar disorder. “He didn’t talk about himself. But he did talk about his grandfather” Wanda said. Lusk’s grandfather also committed suicide. Speaking about his grandfather’s suicide Lusk would say, “How could he do that to his family and friends”?

Lusk was under the care of both a psychologist and a psychiatrist for many years.  His medication included lithium, a mood stabilizer, which he took for 15 years. Wanda said that the lithium helped considerably, but that more than a year before his death Lusk said he felt it was becoming less effective. While a new drug was prescribed, his mood swings became more pronounced. His medication was changed again. According to his wife, the situation became only slightly better. During the same period Lusk’s mother died, which took a heavy toll on him. He never really came to grips with that loss.

Wanda takes issue with those who say Lusk abused drugs and alcohol — at least in recent years. “Donald did drugs and alcohol years ago — especially after his father died when Donald was only 17. But when [their daughter] Crystal was born he stopped drinking and drugs.” She said that, in fact, many teenagers in the village trusted her husband and came to him just to talk or to borrow a guitar. “He would constantly lecture them not to take drugs.”

There is no doubt that at times Donald Lusk’s behavior made life very unpleasant for his family, friends and neighbors. He played very loud music. He threw rocks at neighbors’ houses. He ranted and raved. He could be a nightmare. But he also had a sweet side. Wanda met her husband at a “skip day” from Haldane High School. “Donald had a reputation and I was told to ‘stay away from him, he’s bad news.’ But I saw another side of him that others didn’t. He was kind. And he was old fashioned with girls,” she said. They were together for 30 years.

Not defined by a disease

When someone suffers from a disease, they are sometimes defined by that disease in the eyes of others. “She has cancer” “He’s got Parkinson’s disease” “He’s terminally ill.” When the illness is a mental illness the defining can be crueler: “He’s just crazy.” It’s truly heartening to read the comments about Donald Lusk submitted to The Current shortly after his death by people who knew him, because it is obvious that for many he was not defined by his illness. Here is a sampling:

Donald Lusk was not “just crazy” and he was not “just Donald being Donald.” He was a multi-faceted human being. He was a father, a husband, a son, a friend and a neighbor. He loved music. He was an outspoken, local, political activist. He was a true “Springer”. He also happened to be someone who suffered from bipolar disorder.

To learn more about bipolar disorder, including how to help those who suffer from it, visit the website of the National Institute of Mental Health at nimh.nih.gov.