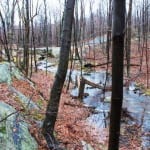 Philipstown’s Conservation Advisory Committee (CAC) Tuesday night (Sept. 21) postponed action on a project that pits neighbors against neighbor over plans to build a driveway through a delicate wetland. The delay dismayed the driveway’s critics, who turned out accompanied by an environmental engineer they had hired, to contest the plans by the Robert Jordan family for the 10-foot-wide driveway, at 545 East Mountain Road.
According to Acting Chairman Eric Lind, the CAC removed the Jordan application from the agenda after he learned that it lacked essential materials, including an updated map. “We’re not going to discuss Jordan tonight,” he told the audience at the beginning of the meeting. “We don’t have a plan to refer to, so we’re just not going to address it.  I just found out this afternoon that it wasn’t ready. We have no final plan. If we don’t have a plan we won’t discuss it at the next meeting, either,” he said.
The Jordan’s already have a house on East Mountain Road and want to build the drive to reach a site on an adjoining parcel, where they envision a new house. Because the new drive would cross a wetland with the second-highest state rating in terms of environmental significance, they needed a Department of Environmental Conservation permit. The DEC granted it in May, largely because the planned drive would provide access to the proposed house site.
While the Jordan’s could not be reached for comment, some of the project’s critics had a lot to say. Russell Cusick, who lives on an adjoining property, urged the CAC to hear remarks by David Clouser, a professional engineer and land surveyor, hired by the critics to review the project. “I think it would benefit the community” to listen to him, Cusick said. “I’m just incensed that this gentleman came all the way from New Paltz and was not permitted to discuss flaws in the DEC’s reasoning,” Cusick said later, as a half dozen driveway-critics lingered outside the Town Hall.
Steven Loria, another opponent, asked the CAC to provide any new plans from the Jordan’s sufficiently in advance of a future meeting to allow others to study them. “It’s not acceptable to get a plan the night you guys are looking at it,” he said.
After Tuesday’s meeting, some expressed incredulity that the Jordan’s did not know until mid-afternoon that they would not have their materials pulled together in time. “The fact is that it’s just impossible you don’t know you’re not prepared” until such a late hour, Paulette Schneider said.  “The applicant can do this again and again and there’s nothing to stop him” and thus perpetually frustrate the opponents and complicate the process. As she has previously, she suggested that the Jordan’s could use adjacent existing drives to reach their new house-site and avoid building a new drive at all.  The neighbors say they want to protect the wetland and that any harm to it would also threaten their own properties. Thus the case pits one set of property owners and property rights against another.
“We are a family that purchased property to build on with a pre-existing Board of Health permit, and as law-abiding citizens, we have proceeded to fulfill the necessary obligations to do so,” the Jordans told Philipstown.info in an e-mail a few weeks ago. “We have complied completely with all the requirements necessary and look forward to the opportunity to go forward with our right to use our property.”
But Cusick argued in a Sept. 21 e-mail that “property-owners’ rights do not strictly apply to what a property owner has the right to do with her or his land.  Property owners’ rights also apply to the right of property owners to rightfully protect their land from potentially damaging and irresponsible construction by neighboring property owners.” Such construction “and fragmentation of our extremely valuable wetlands can and does lead to loss in property value and increased flooding” as well as to safety hazards and health risks, “not only for those property owners on the receiving end but for the entire Philipstown community,” Cusick asserted.