Cold Spring’s latest dark-skies lighting Saturday (Oct. 2) at the Hudson River waterfront produced curiosity, public support, and — again — enough light to both read and write after dark and see the mountains beyond and stars above.
The display, for members of the public who might have missed the similar Sept. 16 demonstration, drew about 25 residents, who wandered by at various times during the informal evening event, which began in daylight around 5:30 and ended after dark around 8. Once again, Mayor Seth Gallagher and James Hartford, a partner at Cold Spring-based River Architects, presided. As they had on the previous occasion, they 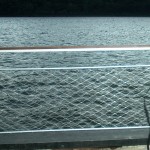 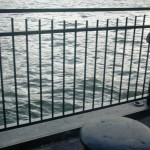 began by removing sections of the current dock railing and installing samples of possible replacements. One resembled a chain-link fence that melted into the background when viewed against the water.  The other piece mimicked a traditional, wrought-iron Victorian fence. The proposed lighting involves tall, goose-neck street lamps and thigh-high metal bollard lamps, vaguely reminiscent of lanterns atop metal poles. After dark, both sets of lights produced strong illumination with little or no glare, allowing someone to see the water, mountains, and stars as well as the dock itself.
“The concept is to bring back night skies,” Hartford explained to curious onlookers. “And the Hudson Highlands Land Trust is paying for this,” thereby sparing village finances.
Developed by the village government in conjunction with the Land Trust, the project began 3-1/2 years ago. The goal is to restore 19th century ambience to the waterfront while enhancing security, meeting standards for fixtures that withstand high winds, and improving maintenance and energy-usage, thereby saving tax money. As planning got underway, the project grew to include new railings for the dock, as well. With its widely-spaced 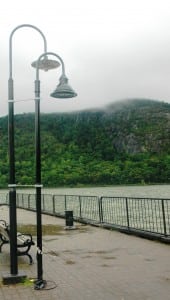 A day before the demonstration, a sample goose-neck lamp stands to the right of the existing light.

bars, the current railing does not meet safety standards. To fund the overall project, HHLT raised about $54,900, receiving contributions from a range of sources, including the Cold Spring Lions Club, Hudson River Valley Greenway, Hudson River Foundation, Open Space Institute, Entergy, and M&T Bank. HHLT Executive Director Andrew Chmar also convened an advisory panel, what he termed “a pretty broad group” to provide input.
Although open to the public as well, the Sept. 16 demonstration was held for the benefit of the village Historic District Review Board. In time, the latter is expected to pass along its opinion to the Village Board, which has the ultimate authority to approve or kill the project. “I’m going to do anything in my power” as mayor to make the proposed project a reality, Gallagher said.
As members of the public considered the fence sections and lights, the feedback was overwhelmingly positive. “We love both of them,” Luke and Kathleen Fiske, Cold Spring residents, announced, nearly in unison. “I like the lights and I like this [fence] because I like to be able to look through and see the water,” Luke added. 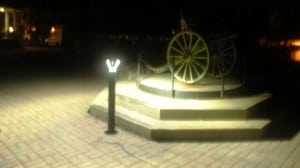 A bollard lights the area around the cannon during the demonstration. Plans call for several bollards on the dock.

Joe Plummer, who lives on a property that straddles the Cold Spring-Nelsonville boundary also reacted enthusiastically, urging the village and public to back “anything we can do to make it more accessible, every little thing we can do to make the natural world come through even more, because it’s just so special and wonderful.”
As the shadows lengthened, a vintage airplane — identified by one witness as a B-17 bomber — flew overhead. Later, a flock of geese honked their way into the dusk and five swans glided by on the water, moving toward Foundry Cove. New spectators replaced the afternoon crowd.
“I think people really like the goose-necks,” a woman announced.
“They are nice-looking fixtures,” as well as being highly energy-efficient, said Andrew Pidala, of Pidala Electric Inc., who as a volunteer has devoted numerous hours to the lighting initiative.
Resident Steve Etta said he was amenable to the proposed change, if it worked. “As long as it lights it up so you can see, it’s all right,” he said as he waited for darkness to fall.

A poster from River Architects shows the old dock, used for the filming of a movie about 60 years ago.

Etta and the mayor reminisced about the way the waterfront looked when they grew up in the village, before the dock was rebuilt and paved. Old photos supplied by James Hartford showed a structure much lower to the water, more like a traditional wooden pier.
“We used to drive out, park here, sit out here,” Etta recalled. Was it a “Lovers’ Lane” for local teen-agers, a non-lifelong resident wondered. The mayor laughed. “It kind of was.”