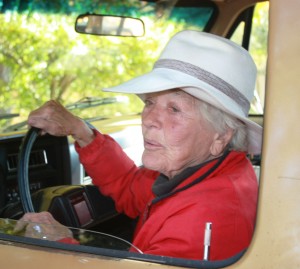 I knew right off that my interview with Leona Dushin would be interesting, to say the least. How could it be otherwise?

When I arrived at her South Mountain Pass home in Garrison, she already had two chilled cans of Budweiser ready to enhance our conversation — not that it would be needed. Neither was the second can. And she finished hers first.

Leona is 84 years old. As I took my seat, Leona suggested that I could use a bit more light for taking my notes. She quickly scampered up onto the seat of her chair and then stepped gingerly across the gap right onto the coffee table where she reached high above her to adjust the light bulb.

Leona was ready. I wasn’t sure I was. As I would soon learn, Leona has done it all. From demonstrating cake blenders, posing as someone’s wife and starting her own company to performing in the circus, battling communist professors and using equestrian riding therapy to help people with disabilities.

Leona Dushin was born Leona Margaret Christina Hauff in White Stone, Long Island in 1926. She was a young girl during the Great Depression but remembers it vividly. “I felt very sorry for my next door neighbor. He had to take to the rails to find work and to send money home to his family. But he survived — and he came back to his family.”

If there is a common thread throughout Leona’s life it is her love of horses. “I think I was born with a passion for horses. I’ve been told that as a child I ran out onto the street and threw my arms around the hind legs of one of the junkman’s horses. The junkman was terrified! He said ‘somebody get that kid!’ “

She was 18 months old at the time. When she was 5, her dad bought Leona her first horse — a spotted Shetland pony named Calico, which she kept at the Car Barn along with the horses used to pull the city’s trolleys. 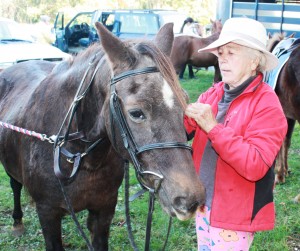 Horses have been a common thread throughout Leona Dushin’s life

Leona began to attend dance school when she was five. She learned tap, ballet, acrobatics and wire walking. At 14 she became a member of the June Taylor Dancers. “We performed everywhere — at Elks Clubs, weddings and bah mitzvahs. Everyone had to sing and have a specialty. I did tap-on-toe acrobatics. I don’t know how I did it. I couldn’t do it today!” she said.

When she was 16 Leona worked the counter at a local drug store. “It was a fun job. I loved it. People would be three deep at the counter and made stuff for everyone. I think that is where I learned to organize my life.”

At 19, Leona and three friends bought a 1939 Model A Ford — with a rumble seat — for $95. Their plan was to take the car to Corpus Christi, Texas, where they had been told they could sell it for four times that amount. During a stopover in Florida, she was hired by the Ringling Brothers Circus. “During my interview, I was asked to pick up my skirt. The interviewer said, ‘You’re hired!’ I’ve got great legs,” Leona said.

Her use of the present tense was not an accident. As a circus performer, Leona did tap while jumping rope, road elephants and did “cloud swings” on the trapeze — 80 feet above the ground. “We did three shows a day and each show had five acts.”

As always, her love of horses prevailed and not long after joining the circus she became the lead rider, opening each show atop Ringling’s own horse. “Mr. Ringling used to pick me up each morning and then drive me home each night after the show.”

It wasn’t exactly all work and no play during Leona’s life with the circus. “My roommate was Marlon Brando’s girlfriend, so my boyfriend and I went out with them quite a bit. I was a party girl,” she laughs.

Always true to her word, Leona made good on a promise to her parents and quit the circus in order to finish school. She enrolled in Classic History at New York’s Queen’s College but quickly realized, “This is going to get me nowhere.”

She switched to art history with a minor in education — her mind focused on a teaching career. The education professors of the day “were all communists and I knew it. Edward R. Murrow was part of the same crowd,” Leona recalls. “If you didn’t reflect their views, they’d fail you. I was not going to swallow that.”

Leona spoke her mind but paid a price. She passed but not with marks good enough to complete the required practice teaching. Her dream of teaching had been derailed, for the time being at least. 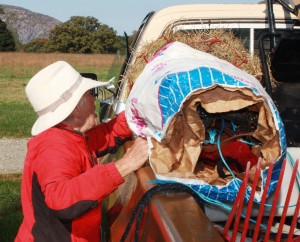 Instead of teaching, Leona found herself working in the basement of Macy’s, demonstrating the American Flyer Whirl Beater, a cake mixer. Her workmate was a young man who would go on to become Long John Silver, a well-known New York City radio personality. Her background in art landed Leona a home-decorating position at Macy’s, where she earned a salary of $27 for a six-day week.

For a time Leona worked in the fabric department of The Altman. There she met a man named of Tommy Tucker who she says was “very cute.” Tucker asked her to pose as his wife in order to help speed along a real estate transaction. Never one to turn down a little adventure, Leona agreed, the sale went through and the next thing she knew she was being flown to Cape Cod where she was put in charge of decorating Tucker’s summer home.

In 1950 she and her good friend Nancy Brown started their own business, Sheldon Interiors. “I used to stay up all night working then going to the beach at Riis Park to play chess” Leona remembers.

That was also the year she met Frank Dushin at a party at Columbia University. “Everywhere I went, Frank would show up. I couldn’t avoid him!” she laughs. She later learned that Frank had bought her phone number from a friend. “We used to go to Pleasantville where Frank lived, holding hands and driving 90 miles an hour in his MG.”

Dushin went on to become a well-known architect. They married while in England in 1953. One year later they discovered the South Mountain Pass property that would become Manitou Farm. They built their home and settled there in 1957. It was the first house that Frank Dushin designed.

In 1957 Leona started breeding horses and the next year established the Garrison Horse and Pony Club. “We had 14 kids and six parents that first year,” she recalls. Therapeutic horseback riding became part of Leona’s life in 1977. The aunt of one of her riding students had suffered complete memory loss as the result of an accident. “She couldn’t even remember where the silverware was kept,” Leona recalls.

But the aunt had known how to ride a horse earlier in life. Leona put her back on a horse, she remembered how to ride — and so began her recovery.” There’s a direct connection between the brain and the butt,” Leona chuckled. “It was thrilling to see her progress.”

In 1980 Leona finally realized her dream of becoming a teacher, initially doing substitute work in Garrison, Beacon and Westchester. In 1985 she was interviewed by a principal in New York City who asked what she had majored in at college. When Leona replied “Art,” he said, “Fine, we’ll make you a science teacher.”

She went on to earn a master’s degree in science and accreditation to teach Spanish. She taught science in grades K-8 and earned a master’s degree in special education. She worked with preschool children as a special-education evaluator for four years and then as in independent contractor for two more years, doing special-education evaluations from “preschool to Rikers Island,” as Leona puts it. 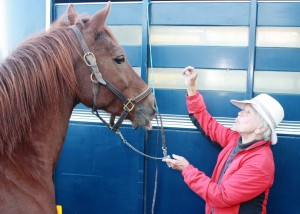 Leona has had and continues to enjoy a very rich and diverse life. At one time she bred Maltese dogs. She has been known to play the ukulele at local open mic nights. She plays the spoons and the washboard on Irish Nights at the Stadium Restaurant. She volunteers regularly at the Paramount Theatre in Peekskill.

She rides her favorite horse, Encore, every day. And she continues to breed Morgan horses at Manitou Farm as she has for the past 44 years while also offering horseback riding lessons.

On Sunday, Oct. 17, Leona and her riding students entered their first horse-and-cart driving competition at Boscobel. “Leon said she was scared to death beforehand. Somehow I doubted that. After the competition, she said it was fabulous.”

2 thoughts on “The Stories of Our Community Elders — Leona Dushin”