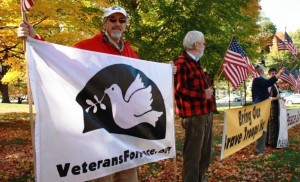 They have become a very familiar sight early each Saturday afternoon in Cold Spring. They are a handful of people, standing along Chestnut Street on the lawn of St. Mary of the Highlands church. They are holding signs, flags and banners, and quietly demonstrating against the wars in Iraq and Afghanistan. While their presence has not changed since the weekly demonstrations began in 2003, the reaction of passersby certainly has.
“People used to yell unpleasant things at us” said Pam Kasa, who was instrumental in forming the group. “Now it’s rare that anyone speaks against us.” Kasa hosts meetings of the local chapter of Amnesty International at her home. It was at one of those meetings that the weekly peace demonstrations took root. “When it became clear that President George W. Bush was going to go to war with Iraq we held a candle light vigil with about fifty people one Wednesday night. We moved it to Saturday to get more people.” They’ve been there ever since.
Gordon Duggan, a member of the group, does not have pleasant memories of the demonstrations’ early days. “There were police cars here. And there was another group here who said they supported the troops – as if we didn’t. People gave us the finger. It got really hostile.”  But like Kasa, Duggan has seen a huge shift in public sentiment.  “Now we get waves and honks” he said. 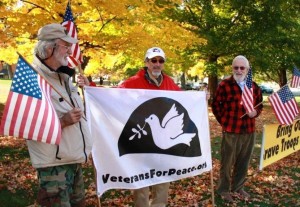 Duggan says the goal of the demonstration is “to bring our troops home from the wars over there. We’ll keep demonstrating until they come home.” A veteran, Duggan does not oppose all military interventions. “I’m not saying there aren’t some wars I wouldn’t support. But not these wars.” He disagrees with those who feel that demonstrating against the wars conflicts with supporting US troops. “We absolutely support our troops. You can support our troops and still demonstrate against the war. We just shouldn’t be there.” Duggan thinks there is merit in an effective military but not in its current form. “There does need to be a police force in the world but I don’t think it should be the US. We should be part of it.”
Kasa was less supportive of military action in explaining the demonstrations’ purpose. “It’s about standing up for what this country stands for. It’s about not using war to solve problems. I’m not sure how often war has worked – compared to how often it has not worked.” Miriam and Eric Wagner keep the groups’ signs and flags. Eric sends out an email reminder each week to the roughly thirty members who make up the group.  Turn-out usually ranges from six to twelve people. “It’s wonderful when kids wave at us and give us the peace sign. It’s very validating,” Miriam said. 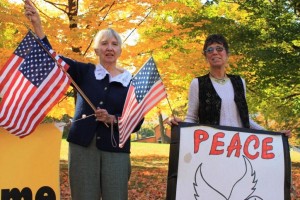 While community support for the group has grown over the years, not everyone agrees with their approach. Placito “Parge” Sgro is the past Commander of American Legion George Casey Post #275 in Cold Spring. “I’m a patriot. I served in the Second World War and Korea. On a personal level I don’t support the (Iraq-Afghanistan) wars — I think we should get out of there – but I just don’t believe in getting out there and demonstrating like that. I’m really against it.”
Phil Schatzle, Commander of the James Harvey Hustis VFW Post 2362 in Cold Spring is more sympathetic. “People have the right to protest – that’s the history of our country. To be honest that’s why we have guys fighting over there- for freedom of speech. It’s been that in all wars. I’ve seen in other places where people protest against such demonstrations – I hope it never comes to that in our community. ”
Last Saturday’s demonstration included five women and five men, including Neal Spitzer. “It’s important to understand that men also don’t want war. It’s not a sport we enjoy. People don’t really want to kill one another” Spitzer said.