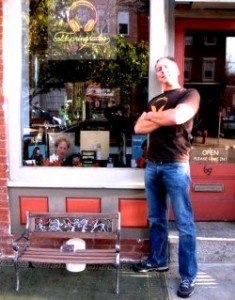 Cold Spring has its own radio station. In fact it has had one since the beginning of 2010. Cold Spring Radio is the creation of local resident Sam Tallerico. The internet-based station provides a daily stream of music from the 1950s to the present day, along with commentary and local interviews. Cold Spring Radio is a one DJ operation — although that may change soon if Tallerico has his way.

“Radio has been my passion since I got my first clock-radio at age 10,” Tallerico explained. “I majored in television and radio at Western Michigan University. I didn’t end up (working) in it but I’ve always wanted to. And”¦I just got tired of hearing the same old stuff on the radio – -with no personal insight.”

For Tallerico, radio is something personal that can offer much more than simply listening to music on an iPod. “I like the idea of a person being out there – speaking truthfully about the music they’re playing” he said. He certainly has enough music to keep him playing and talking about it for quite some time. His personal vinyl record collection includes about 10,000 “45s” that feature music from the 1960s through the 80s as well as about 500 full-length albums. He also has a sizeable collection of CD’s. Vinyl is stored in a climate-controlled room in his basement.

What people hear when they tune into Cold Spring Radio are digital recordings –Tallerico’s collection converted first to CD’s then to his MP3 player and finally onto his laptop computer. 45 RPM records pose a greater challenge than the albums. “The fidelity isn’t that great” he said. Music is not just selected and played at random. “This is not an iPod on shuffle. I very carefully program this so that you get a good mix. I’ve spent a lot of time trying to select music that sounds good together. I vary the tempo. I won’t play four soul songs in a row” he said.

Cold Spring Radio offers music almost non-stop. It broadcasts daily from early morning until 11:00 p.m. From Monday to Friday it features mainly singer-songwriters and pop rock from the 1950s to present day. “But I will also throw in Sinatra or The Clash just to keep people on their toes” Tallerico said. The station recently reached a milestone when it added the 5,000th song to his from Monday to Friday playlist. Weekends include another 3,000 songs that highlight the music of the 60’s. Adding to the authenticity of the weekend sound are advertising jingles from that era. Tallerico even goes so far as to play songs during the months that they originally became popular.  “Baby Love” became a hit for The Supremes in October of 1964 –so last month it was featured on the station. 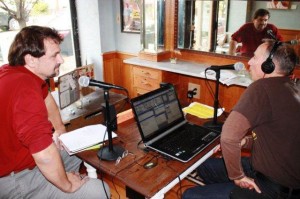 While Tallerico has a particular fondness for “bubblegum” and Motown music, the internet and the local music scene have also had an impact on him. “I discovered so much good music being played on other internet stations. People like Jason Spooner and Joshua Radin.”

Since he moved to Cold Spring in 1995, local venues such as The Listening Room have also expanded his musical horizons, exposing him to regional artists like Dar Williams, Painted Betty, Dana Edelman and The Trapps. “There is a lot of good music being recorded out there but the problem is that radio stations are not playing it. These musicians really deserve to be heard. It’s almost criminal that they are putting out this product and it’s being ignored. It’s a business that’s geared to a certain demographic. It’s about selling advertising.”

Cold Spring Radio takes special delight in exploring the nooks and crannies of the music world. “I’m really into finding music that isn’t played and doesn’t get worn out being played on other radio stations” Tallerico said, adding that Cold Spring radio features artists who may be familiar by name but whose music is not heard a lot. “It’s very gratifying when someone walks by and says ‘Who is that singing?'”

Cold Spring Radio is one station that relies in part on people “walking by.” Its window studio at 69 Main Street features outdoor speakers — to the constant surprise and puzzlement of passersby. “People don’t get it right away,” Tallerico said. “They ask if it’s a record store; then they see me with headphones on and talking into a microphone. They put two and two together.” 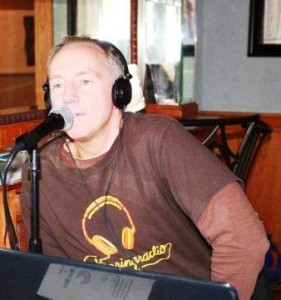 Sam Tallerico “on the air” (Photo by Mike Turton)

He admits his storefront studio is an idea borrowed from a radio station in New York City’s East Village. He was also taken by an article in the The New York Times two years ago that described a station in Montana that broadcast live from the front porch of a house. “I thought that would be so cool,” he said.

In an era of ipods and satellite radio, Tallerico thinks that internet radio still has something unique to offer. “I believe if done right it can supplement rather than compete with those other media. I hope we can compliment other media in town.” That may happen quite naturally. Cold Spring Radio shares space with Philipstown.info although the two organizations are not connected.

It’s been quite a few years since 10-year-old Sam first scanned the dial on his clock radio but it made a lasting impression. “Casey Kasem was a radio idol of mine in the 1970s and 80s.” Having grown up in Michigan he also listened to powerful AM stations such as CKLW, based in Windsor, Ontario and a giant in Midwestern radio. “I remember Tom Shannon, Dick Purtan and Scott Regan among many others.” As a volunteer DJ at Vassar College’s WVKR he even played CKLW’s 1970s on-air promos – much to the delight of transplanted Midwesterners.

It seems unlikely that Cold Spring Radio will make the leap to broadcasting via FM transmitter. “By being on the internet I don’t have to worry about the FCC [Federal Communications Commission] a transmitter or an engineer. The only thing I have to worry about is licensing for royalties.”  Tallerico must pay monthly music royalty fees to the American Society of Composers, Authors and Publishers (ASCAP) and Broadcast Music Inc. (BMI).

Because it is internet -based, Cold Spring Radio virtually spans the globe. Emails have come in from California, Utah and other distant locales, “But most listeners are local” he said. Tallerico hopes that local residents will get even more involved. Local guests are featured on Saturday and Sunday afternoons between noon and 4 pm. “I interview poets, musicians, store owners, residents and visitors. It’s an open mic. People can just walk in and talk with me on air.”

He hopes to add segments such as “Mornings with the Mayor” in the future. “I want this to be about community. I want people to feel comfortable participating — tell me about art exhibits, kids in plays, sports events. I hope to get more shop keepers to come in to let people know what’s going on in their stores.”

People often ask how they can help Cold Spring Radio and because the station is a not-for-profit organization, Sam has an easy answer. “Financial contributions are gratefully accepted.” He also offers attractive t-shirts that can be acquired by donation and which feature the distinctive Cold Spring Radio logo. And for those who have always wanted to try their hand at being a live, on-air DJ, time slots will soon be available for lease for what he describes as, “a very modest donation.”

If radio seems to be in Tallerico’s genes it may be explained by his tongue-in-cheek description of his family tree. “I am the love child of Jonathan Schwartz and Casey Kasem.  And I was raised by Garrison Keillor” he said with an almost-straight face.

When not tending to Cold Spring Radio, Tallerico works as an interpreter for the deaf. Tallerico says, “follow instructions exactly and you should have no problem.”