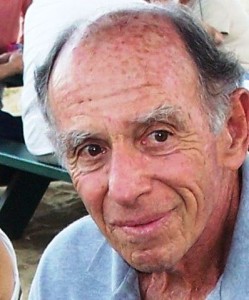 Pete Seeger, David Amram and a host of other Hudson Valley musicians will perform at a memorial concert in Beacon on Sunday, Dec. 5, to celebrate the life of local social justice activist Art Kamell. The concert will be held at St. Luke’s Church Annex, 850 Wolcott Ave from 2-5 p.m. Other performers will include Charlie King, Karen Brandow, and Vinie Burrows.
Kamell, a retired labor lawyer who worked closely with his wife  Connie Hogarth in local politics, the peace movement, civil rights and environmental movements, died at his Dutchess Junction home on Nov. 4. The memorial concert will benefit Doctors Without Borders, Pastors for Peace, School of the Americas Watch and the United Farmworkers Union: four of Kamell’s favorite organizations. A $20 contribution will be requested at the door, though no one will be turned away.
Connie Hogarth stated that “Art gave himself selflessly through the causes, beliefs and communities he was involved in. His life-long devotion and activism for compassion, peace and justice have been extraordinary examples in and to the world as well as to his innumerable friends.” Kamell was active with the Beacon Sloop Club, WESPAC, Clearwater, Amnesty International, NYCLU, and the Connie Hogarth Center for Social Action at Manhattanville College, among others.
Born Dec. 4, 1928 in Yonkers, N.Y., he was the son of the late Leo and Barbara Schneiderman Kamell.  He is survived by his wife and his two children, Lincoln Kamell of Seattle, WA, and Elizabeth Kamell of Syracuse, N.Y., his two stepsons Richard Hogarth of Lake Charles, LA, and Ross Hogarth of Woodland Hills, CA, his grandson Brady Todd Hogarth, two nephews David and Leo Sacks, and his niece Joanne Sacks.