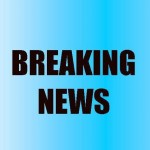 Power cut to part of the village

A car veered into a utility pole on Northern Avenue in Cold Spring early Sunday morning (Dec. 5,) caused an electrical fire, and cut power to part of the village, according to accounts from the Cold Spring Police Department and neighborhood residents. The Police Department reported an arrest following the collision, which set off a chain of events that one resident compared to a scene from a war.

The incident involved both local police and the Putnam County Sheriff’s Department.  The drama began around 2:40 a.m., when the car struck the pole on Northern Avenue at Garden Street and a 911 call went out to the Cold Spring Police Department. Responding, Officer Anthony Pupczyk “found a broken utility pole and a trail of automobile debris leaving the scene,” the Cold Spring police reported in a news release on Sunday evening. “Following the debris trail, he found the vehicle had struck and damaged another utility pole, also on Northern Avenue, where the vehicle was abandoned by the operator.” The Cold Spring Fire Department also was summoned the scene.

Subsequently, the police said, Deputy Sheriff Robert Hudson noticed “a subject” walking up Main Street. “Information found at the scene and a motor vehicle registration check indicated the car was registered to the suspect,” the police said. An interview followed and the man was arrested by Officer Pupczyk, and arraigned before Village Justice Thomas Costello, the police added. Arrested for allegedly driving while intoxicated (a misdemeanor) and leaving the scene of a property-damage auto accident (a violation), he is expected to appear on Wednesday (Dec.8) in Justice Court, the department said. The police identified the arrested individual as Mark J. Lemon, 21, of Philipstown. 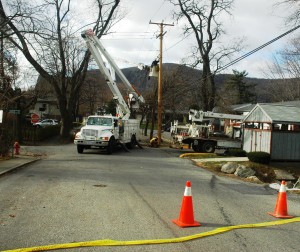 Around 10:15 Sunday morning, a crew works at the site of the wrecked utility pole (Photo by Liz Schevtchuk Armstrong)

The accident sent sleepy residents from the warmth of their beds to the street and lit up the sky. “It really seemed like a war scene,” said Ruth Eisenhower, who lives on Northern Avenue. “The pole was broken in three places.” The power line on the pole exploded, she said. “There were just bursts and bursts of light. Then it caught fire. The explosions on the wire went down Garden Street.” As the line burned, “it made such an awful, awful smoke,” creating acrid fumes, and dried leaves on a lawn caught fire, she said. Eisenhower added that about half the block on the northern end of Garden Street was affected. “All the neighbors were out.” she said. “It’s just so fortunate nobody was hurt.”

Anne Impellizzeri, a High Street resident, said the accident awakened her. “I knew that something dramatic had occurred in this village,” she said. Looking out, she saw  the eerie brightness. “The trees were just silvery; it was a very powerful impression. It must have been terrifying” to those close by. A utility crew worked mid-morning at the site to make repairs and restore power.

Jeff Wigdor said the light flashes were so bright one could see the shadow silhouette of the village on the mountains across the river, as well as flashes reflecting off the clouds high above. An unsigned message sent to Philipstown. info at 3:49 in the morning stated:“Driver hits two power poles and live wire burns into Northern Avenue around 3 a.m.”

Mike Turton contributed to this article.