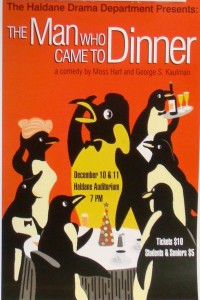 Two performances only, Friday and Saturday at 7 p.m.

The rehearsals are stretching from late afternoon through 10:30 at night this week as the crunch is on for the Haldane students performing and working behind the scenes on this weekend’s drama department production of George S. Kaufman and Moss Hart’s 1939 comedy The Man Who Came To Dinner. Last Saturday, as scenery was being painted and sets constructed, director and set designer Martha Mechalakos and a large cast were running through all of the acts, in advance of the technical and dress rehearsals later this week.

The Man Who Came to Dinner, which may be familiar to many through the 40s film starring Bette Davis, is set in a small town in Ohio. It has a fish-out-of-water plot involving the (fictitious, but based on a real personality of the day) cantankerous and sophisticated New York City radio personality and theater critic, Sheridan Whiteside, whose dinner with a local family

turns into a lengthy stay following a slip and fall accident on their doorstep.  His monopolization of the household and influence over an assortment of family members and hangers on provides the grist for the comedy mill. Malachy Cleary portrays the acerbic Whiteside.

Nick Marino and Stephen McCann, seniors, each with a sizeable role, were watching a scene being rehearsed on Saturday when Philipstown.info asked how the family dynamics in the play related to their lives today – did it seem like another galaxy, or merely highly theatricalized?  McCann said, “It’s pretty different.  You don’t have to go into a different state of mind, but you have to watch your body language – not be too flirtatious – was so much more conservative” Marino reflected, “I play the father, who was really ‘The Master of the House.'”  That’s why he is so annoyed about the presence of Sheridan Whiteside.  The family structure was very rigid.” 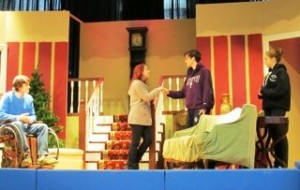 McCann added, “Yeah, he wants to be in full control of his daughter’s wishes, and he wants his son to follow in his footsteps, but he son wants to pursue photography and art.  It was very different.”

Diretor Mechalakos, when asked for a quote mid-rehearsal on Saturday, could only muster an “aaaghghghgh!” but with the benefit of sleep (maybe) was able to express her thoughts more clearly by Monday morning, inviting the community to come enjoy the show: “Please come support the efforts of these young actors. They are doing a terrific job, the show is immensely entertaining, with beautiful costumes and a fabulous set. You won’t be disappointed. Get the holiday season rolling by attending a performance of The Man Who Came to Dinner.”

As always, community institutions and businesses contribute to the success of these endeavors, and this production has received support from Our Lady of Loretto, St. Phillips Church, and Grey Printing.  The Depot Theatre and Hudson Valley Shakespeare Festival have loaned costumes, and a special nod is given to the hard-working Haldane custodial staff and facilities director Wayne Robinson. 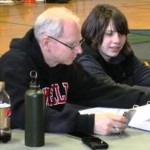 The Haldane High School drama department presents a play each year around this time, and a musical in the spring.  This year’s musical, Grease, will shift eras forward a decade and a half or so from The Man Who Came To Dinner. In addition, a middle school play is performed in June.  Add to this the High School Talent Show (in April), and the recent Lion’s Club Community-Wide Talent Show, plus all of the school music concerts taking place next week and again in the spring, and the stage at Haldane is seeing a lot of welcome dramatic and musical action these days.

The Man Who Came To Dinner will be performed this Friday and Saturday at 7 p.m.  Tickets are $5 for students and seniors and $10 for general admission and can be purchased at the door.