“Yuletide Teas” are a hit with visitors to Boscobel

For years the December candlelight tours at Boscobel signaled both the end of the historic site’s three-season calendar and the beginning of winter in the Hudson Highlands. This year, in keeping with a host of new programs offered by Boscobel for the first time this year, “Yuletide teas,” complete with fashion shows have replaced the candlelight tours. The teas, offered twice weekly, on Wednesdays and Sundays, have proved to be a hit with visitors to the American Federalist mansion.

The program begins with Boscobel’s usual one-hour tour, which starts at the small building near the parking areas.  A display includes a timeline, which served to remind this visitor, who had done the tour quite a few years ago, of the remarkable history of this site.  The most intriguing factor remains that, in the winter of 1954/55, the entire structure of the home was moved from Montrose, where it had become dwarfed by the then newly-constructed Veterans’ Affairs Hospital buildings.

Detail from display on the history of the site

To refresh the memory of locals who may not have visited in some time, the home was constructed from 1804 to 1808, and was occupied by the Dyckman family and their descendants, until 1888. Afterward it was first leased, and then left unoccupied.  In 1924 Westchester County acquired the site, and the Depression left it vulnerable to razing, which was threatened.  In 1945, the Federal government acquired it for a V.A. hospital.  By 1955, a demolition contractor bought it at auction for a mere $35, and it was only through the efforts of the hastily formed Boscobel Restoration group that the building was secured and moved to the beautiful new location at Garrison, where 16 acres were purchased in 1956.  The site opened in 1966, and in 1977, after being closed for a period of time, the exterior was repainted and the interiors were redone in the historically accurate American Federal style. 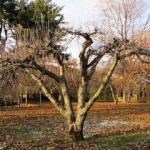 Last Wednesday’s tour was quite full, resulting in three separate sections viewing the home in a staggered fashion.  A large contingent of visitors – about 27, in factv- were from the Scarsdale Women’s Club, and they seemed to enjoy themselves thoroughly. The docent for group three, in which Philipstown.info participated, was an engaging and informative woman named Marie, who later doubled as a model in the fashion show, and whose artwork, in the form of cards, is part of the gift shop collection.  Marie pointed out that the grounds where Boscobel is now located were once all farmland and that everything had been razed when the site was readied for the home, with new shrubbery planted fully grown.

Throughout the tour of the three stories accessible to the public (there is also an attic), Marie supplied detailed information on both the furnishings and the Dyckman family, and the travails of the house through the years.  Some of the information was related to the seasonal decorations on display. For example, consumption of a “Twelfth Night Cake” shown in the dining room led to different scenarios for male and female diners, for according to Marie, “If you were a gentleman who got a slice of cake with a bean, you were ‘Lord’ for a night.  If a woman got the bean she had to make the cake the following year, though.”

At the conclusion of the tour participants were ushered into a room adjacent to the kitchen in the basement, where a repast of savory and sweet tea accompaniments awaited on each table.  At Wednesday’s tea, Boscobel’s Senior Advisor, Development and Special Events, Geoffrey Platt introduced Sally Lyon, of Rhinebeck, whose painted landscaped dotted the walls of the room.

Three varieties of tea were served, in teapots bearing the names of the tea (Chanticleer, Gingerbread and Jack Frost).  Tasty little sandwiches were complemented by a variety of desserts, including pecan squares, shortbreads and Chambord chocolate truffles.  While enjoying the tea, a fashion show began, with models, including Boscobel staff members (all were introduced) wearing Dutch designs, all of which were available in the gift shop, strolling amidst the tables.  Renate Smoller, Gift Shop Manager, offered a commentary on the outfits and accessories. Special discounts on the clothing were made available to Yuletide tea participants.

The Wednesday teas continue through Dec. 29. Reservations are essential; call 845-265-3638, extension 115, or visit http://www.boscobel.org/ for further details.  The Sunday teas are finished for the season. Boscobel’s regular one-hour house tours continue through the end of the month. The site is closed on Tuesdays.  Boscobel is closed in January, February and March.
Photos by Alison Rooney