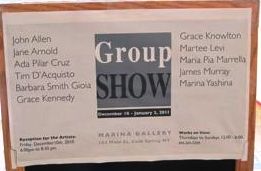 The Marina Gallery, which now seems like a fixture on Main Street in Cold Spring, actually didn’t begin life as a gallery. In its first incarnation, it served as a studio for owner Marina Yashina, where she did her high-end restoration work on the paintings of others.   How high end?   Yashina was one of those who worked to restore the magnificent ceilings at Grand Central Station to their glory.   She also worked at the Kremlin building in her native Russia, amongst many similarly prestigious commissions.

Restoration work in back room

A February 2006, visit to the restoration studio by artist Martee Levi changed things. Levi, who was “minding the gallery last week, with her Boston Terrier and gallery scene-maker Buster, in tow, described what happened, “It was February, and people kept coming in.   I asked Marina if people came in regularly, and she said yes, and that in fact, she wanted to  open a gallery.   I said ‘me too,’ and that was that. A lot of interested people wanted to join immediately. Since then, the space known as Marina Fine Art and Restoration and also as Marina Gallery, has led a dual existence: as a work space for Yashina’s continued conservation practice and as a gallery for rotating exhibits, which generally change once a month or so.

Front room of the gallery

The current exhibition, which has been extended through the end of January, consists of the work of ten artists plus a number of paintings by Yashina herself.   The artists, most of whom live in this region, are John Allen, Jane Arnold, Ada Pilar Cruz, Tim D’Acquisto, Barbara Smith Gioia, Grace Kennedy, Grace Knowlton, Martee Levi, Maria Pia Marrella, and James Murray.   Many of these artists have exhibited and/or taught at the Garrison Art Center.

Levi gave Philipstown.info a brief tour around the space, touching upon all of the artists.

John Allen – “He’s a carpenter; been around a long time.   Teaches drawing at Garrison Art Center in the mornings.   One of Allen’s intriguing pieces resembled a wooden egg carton, containing five oval stones of speckled grey and white.

James Murray,  a sculptor, working in large and small forms, including the barns found in the window.

best known artist here according to Levi, who works in many forms, from sculpture to photography, to “spheres. Knowlton says on her website, “My sculptures are closed spherical forms of various materials – clay, concrete, styrofoam and paint, steel and copper. They are created by an ancient technique involving the laying on of hands.

Maria Pia Marella, paintings with chambers, angels, and an element of the mystic. 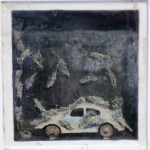 Detail of work by Tim Aquisto

Tim D’Acquisto, found objects in boxes, inviting the eye to peer in closer and the mind to ponder what’s in there.

Jane Arnold, ceramic shapes, in shapes familiar and not, and vases which looked like ancient Japanese treasures. 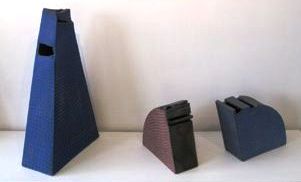 Grace Kennedy, with just one of her new “Road

Kill paintings, already sold, with a raccoon who looks like he is supplicating for a place where he can exist, in the foreground. A full show of Kennedy’s works will take place in March.

Martee Levi
describes her own evolution and process: “I started out as a regular painter, and then I got into construction.   These fun things that I made as ornaments – I started to make them bigger and bigger, it got so that I was climbing ladders, etc. Too much.   So I got into collage, using things like canvas on canvas.   A solo exhibit of Levi’s works took place in July at the Marina Gallery. Levi is yet another of the artists who teaches, not only at Garrison Art Center, but at the National Academy in the city, and at Marist’s Continuing Education for Seniors program.   Levi has nothing but praise for 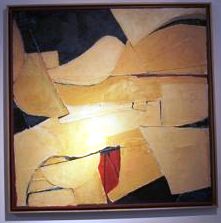 this exhibit, which she curated, “When you have great artists to work with, installing shows is a joy. Levi is excited about the opening of a new gallery, the Terence Donovan Gallery, just up the street, planning to head over later that afternoon to say hello, and stating that “My biggest dream is for more art galleries to come to Cold Spring.
The Marina Gallery, located at 153 Main Street is open Thursdays through Sundays, from noon until 6 p.m. For more information phone 845-265-2204.
Photos by Alison Rooney