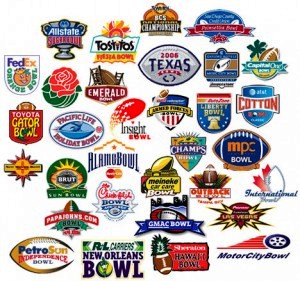 Who names these games anyway?

Here’s my thought: the “Super Bowl” is the stupidest name in all of sport – although there many other contenders in the arena of bad football game names. If we use just a little imagination we could improve the name game considerably. But first some important history.

The downward spiral in football nomenclature began in 1967 when the old AFL melded into the NFL. To celebrate, the wise men of football decided to name the annual festival of halftime and advertising excess “The Super Bowl- I mean c’mon – – is that not the lamest name in the history of sport? When was the last time someone asked you how a movie was and you responded “Super!”? Probably 1967.

I suppose we should be grateful. Had the leagues merged in 1966, in order to be hip, the NFL would have undoubtedly borrowed from “The 59th Street Bridge Song,” a hit for Simon and Garfunkel that year, and named its championship game “The Groovy Bowl.” I can imagine the defense singing in unison, “Slow down, you move too fast!” And if it were named today, how could the biggest of all the biggest games be anything other than “The Awesome Bowl?”

If the NFL is to be criticized for a lack of creativity in naming its ultimate contest, the world of college football has surpassed even the pros. It used to be that college “bowl games” not only gave the best teams in the country a chance to show their stuff – – they had names that were short and kind of cozy. You could even argue they were organic. The Rose Bowl. The Cotton Bowl. The Sugar Bowl. The Orange Bowl. Not only do college bowl games now feature teams that have lost as many games as they won – – some have lost MORE games than they’ve won and the names are really not super at all.

Here are my picks for this year’s worst bowl game names. Are they not enough to make Knute Rockne scream “Rename one for the Gipper” from his grave? The names are all real. Decide for yourself about the notes.

Godaddy.com Bowl (Kids require all fathers to leave the game at half time)

The need for action is obvious if football is to be saved. The following are five suggestions for new game names that will reinvigorate the bowl concept.

The ExLax Bowl (The running game will likely dominate)

Please submit your vote for your favorite bad bowl game name. You can find the complete list at:  http://espn.go.com/college-football/bowls .Groovy Bowl XLV will be played on Feb. 6, 2011 at Cowboys Stadium in Arlington Texas. It should be awesome.

One thought on “Bowl Game Balderdash”