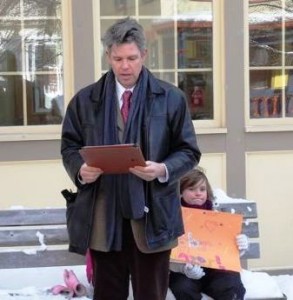 Cold Spring Village’s one-term Mayor, Seth Gallagher, has declared his candidacy for reelection in the village’s upcoming March 15 balloting. Standing in front of the Village Hall in noontime shadows on a frosty Friday, Jan. 21, the Mayor declared that “my first term as Mayor has been dedicated to rebuilding the financial foundations of the village, improving the functioning and responsiveness of village services, and implementing important infrastructure projects critical to the safety, security and quality of life for all residents.”
Joining Gallagher for his announcement were approximately 25 hearty supporters including his wife, writer Erika Wood and his two children, Ronan, 11 and Freya 9, who displayed a hand painted Gallagher for Mayor sign complete with sparkles.  The group stood in a semi-circle amidst the frozen residue from recent snowstorms braving a sub-freezing wind chill to hear their candidate argue that he “was able to transform a budget deficit of $127,000 into a budget surplus of $120,000.”
Throughout his remarks, Gallagher, a local business owner and maker of internationally respected hand crafted Uilliean (Irish bag) pipes, put emphasis on prudent fiscal management as the hallmark of his administration.  He pointedly said he had inherited a village in debt “as result of poor management of our finances,” no doubt seeking to underscore what he sees as the principal difference, between himself and his likely opponent, former eight-term Mayor Anthony Phillips whom Gallagher defeated in the 2008 election by 479 votes to 420. Phillips has not yet officially declared his intentions, but Gallagher acknowledged, when asked, that he knew his former adversary had taken a candidate registration kit from the Village Hall.
Early in his speech Gallagher stressed that his success as Mayor was dependent on the cooperation of the members of the Village Board of Trustees, village employees such as Village Clerk Mary Saari and Police Officer in Charge George Kane among others, as well as the volunteer citizens who staff various boards. Gallagher received the most enthusiastic applause from his audience when he said, ” as Mayor I have cut expenses and increased revenue to lessen our need for property tax increases.  He claimed $140,000 has been saved by items such as recycling improvements and a reduction in legal expenses.  He also cited revenue boosters such as increased building permit fees that now fully fund the cost of the Building Department and the introduction of an off-street parking waiver fee for businesses that is expected to bring in $3,000 or more annually.  Even permits for weddings on the village bandstand by the river was heralded as a $1,500 moneymaker for village coffers. 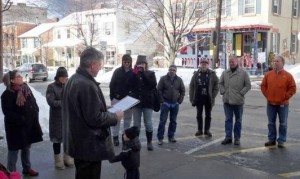 The Mayor also said he had worked to develop “an inter-municipal agreement” with the Town of Philipstown Highway Department to share equipment and lower expenses.  He thanked Highway Superintendent Roger Chirico and Philipstown Supervisor Richard Shea for their cooperation in this effort. Speaking of village infrastructure Gallagher highlighted his work to protect and improve the village water supply by encouraging a study of the three dams that contain the village reservoirs and developing a plan for repair and long-term maintenance as well as settling the decades long legal issue of the village’s access to the upper dam.
Citing problems with water flow and pressure encountered fighting the 2009 Christmas fire that destroyed a new home on the Cold Spring/Nelsonville border, Gallagher said he had worked to update a 1992 water flow study and was in the process of securing funding for its implementation.  He predicted an improvement in water quality and a doubling of fire fighting water pressure.
Gallagher thanked Village Trustee Bruce Campbell, who was present, for his cooperation with the Mayor in spearheading a long delayed project to improve Main Street sidewalks, storm drainage and streetscape, which, Gallagher said, involved maneuvering through both state and federal funding bureaucracies. “We are now only a few weeks away from signing the contracts that will mark the official start of this important project,” said Gallagher. When asked afterwards, Campbell said that his presence at the announcement could be taken as his endorsement of Gallagher’s candidacy.
The Mayor also said he was working with both Putnam County and Philipstown officials to create a senior citizen center at the former Butterfield Hospital site. “I was born here, and as the son of an elderly parent, I haven’t forgotten the debt we owe to the seniors of our community and I have worked hard to safeguard their interests,” he said.
Gallagher reminded supporters he had drafted a village customer bill of rights and responsibilities, “that focuses on creating an open, welcoming and respectful village government,” and that he had expanded the use of the village website and e-mail system to improve communication regarding village business.
Having already interrupted his remarks to reassure his almost frostbitten audience he was nearly done, Gallagher closed his warmly cheered appeal for reelection with an invitation to move to the Go-Go Pops store on Main Street where the proprietors offered the grateful crowd baked goods, coffee and respite from the season’s ravages.
Photos by K. Foley

One thought on “Gallagher Declares Candidacy for Reelection”