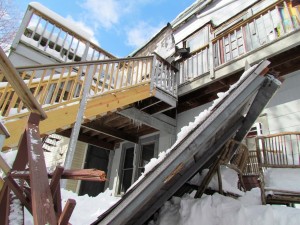 The spate of recent snow storms in the Hudson Valley this winter have posed their fair share of hazards – both underfoot and on area roads.  But the latest snowfall in Cold Spring late Wednesday night and early Thursday (Jan. 27/28) morning created what could have been a serious problem overhead. The weight of ice and fallen snow caused a sizable section of roofing to collapse onto the third and second floor rear decks of two apartments at 55 Main Street. No one was hurt in the incident.
The apartments are located above the Foundry Cafe. “I was working in the kitchen at about ten Thursday morning when I heard what sounded like a large dresser crashing down on the roof above me” said cafe owner and chef Jeff Consaga.  The collapse allowed melting snow to pour onto the cafí©’s walk-in freezer, caking it in ice. “It took me three hours using a torch, hammer and chisel to get into the freezer” Consaga said.
A second floor tenant, who preferred not to be named, said she wasn’t home when the incident occurred. “I called the landlord as soon as I got home and the first thing he asked for was pictures of the damage.” She said that workers arrived on the scene that day and removed the debris.  “They got on it right away” she said, adding that a section of railing will have to be replaced. The tenant, who works in the insurance industry, said that ice and snow buildup have caused numerous similar problems throughout Putnam County this winter. The building is owned White Plains-based Love Realty.
Photo by M. Turton