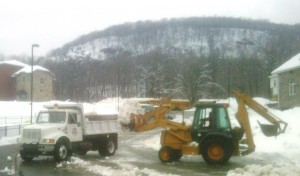 Crews begin as early as early 3 a.m. to plow snow on the Haldane campus

The “old fashioned” winter the Hudson Valley is experiencing has affected virtually everyone in the region and at times created significant challenges and inconveniences. Finding a place to park overnight.  Shoveling.  Then shoveling some more. Late for work. Finding a store that still has salt. Snow buildup on the rooftops. Cars stuck on the shoulder of the road. Aching backs. Lost business. Hazardous driving. And”¦school closings. “Can you believe the schools are closed today? It isn’t that bad!” That comment has been overheard in area coffee shops more than once this winter. Not when storms have been severe – and there have been several of those – but on the days when, by mid morning, skies are blue, roads have been cleared and the weather has not turned out to be quite as bad as forecast.
The Haldane Central School District calendar includes three snow days this year. Now, midway through winter, the school has closed seven times and there have been a number of two-hour delays. According to Superintendent Mark Villanti it’s not always an easy call to make. “The hardest part is finding the right balance. I begin with wanting to stay open and putting trust in the weather forecasts (but) meteorology is not an exact science. It is much easier at 9:30 a.m. to say we could have remained open, but (it’s different) when you “¦ make that call by 5 a.m. I know that whatever decision I make some people may be critical. You will hear it said often, better to err on the side of caution. I can’t be concerned about make-up school days.”
While Villanti usually makes his decision by 5 a.m. the process to get to that point begins much earlier. Here is a typical chronology of what occurs when a winter storm is predicted and begins to materialize. Actual times may vary somewhat with each weather event:

The night before: school officials check weather forecasts. Haldane subscribes to Fleet Weather, a national meteorological service. Villanti often speaks directly with one of 35 staff meteorologists when the forecast for the Cold Spring area is vague or uncertain.

3:00 a.m. Depending on the storm assessment, the maintenance department begins plowing the Haldane campus. In a recent heavy storm plowing was not complete until the 9 a.m. and delayed opening.

3:30 a.m. or sometimes earlier, Director of Facilities Wayne Robinson and mechanic Murray Prescott take to the roads to check local conditions firsthand. Robinson consults with the Town of Philipstown and Village of Cold Spring highway departments when possible.

4 – 5 a.m. Villanti confers with Robinson and Murray by phone and shares information with superintendents in the Garrison and Putnam Valley School Districts. He then makes the decision whether to close the campus, call for a two hour-delay, or open as usual. If a closing or delay is called he notifies principals Brian Alm and Maggie Davis and secretary Linda Dearborn. Dearborn in turn notifies WHUD radio.

5 – 6 a.m. Depending on conditions and Villanti’s decision, work begins to clear walkways, sidewalks and building entrances.

5:15 a.m. If a closing or delay is called, the webmaster posts the announcement on the Haldane website and bus drivers are notified.

5:30 a.m.  The automated Alert system notifies all staff. It takes only about ten minutes.

7:00 a.m. If a delay is called, weather and conditions may be reassessed to ensure that roads and the campus are safe and clear.

While there have been twice as many snow days than anticipated, Villanti does not see making up the time as a problem – – at least not yet. The District has identified April 18, 19 and May 27, as make-up days. “Fortunately we have more school days scheduled than the state requires. So at this point we are following the printed school calendar distributed last year with the make-up days listed.” He also said that the District will not overreact to what has been a snowier than usual season but will schedule four snow days for next year. At the last Haldane school board meeting the idea of a three-hour delay was discussed. Villanti said he is considering a 2½ hour delay, but that no decision is likely to be reached until next year. He also said that opening the school, but not providing busing would be considered “only under rare circumstances.”
Another rare condition is when the District opts not to send buses up some of the more hazardous roads such as East Mountain Pass and has picked up students at drop off points along main roads. “Our parents have been great and they recognize the problems buses have on those days. We invoke this maybe 3 or 4 times a year, possibly less depending on the winter” Villanti said. Asked if  in bad weather buses could pick up students only along major routes such as Route 9, 9D and 301 he responded, “Yes, but we are not going to overreact to a bad winter. If it’s that bad normally school should be closed. Driving in bad weather is not only problematic for school buses, but cars as well.” About half of Haldane’s students live outside the Villages of Cold Spring and Nelsonville.
Heavy snow falls have meant additional overtime and increased use of salt or sand. Villanti said, however, that the winter has not unduly affected the budget.  “We are frugal in the use of overtime.  Our budget is not in danger because of the storms. We want to keep school open so our first priority is to do whatever it takes”¦ as long as we do so safely.”
Still, the coffee shop grumbling about school closings is definitely there and Villanti acknowledges that everyone is entitled to their opinion. “I don’t have a 100 percent batting average”¦but over the last 10 years that I have been a superintendent there have been 3 years where we have gone over the allocation of 3 snow days.” That same coffee shop wisdom often cites potential law suits due to possible bus accidents as the real reason behind the number of school closings due to snow but Villanti puts no stock in such comments. “I have never made a decision out of concern of a law suit in either snow delays or anything school related. I have only made decisions based on what I thought was the right decision for our school district and the children it serves. Fortunately, I have not had a serious injury related to a bad decision and I pray that record goes unblemished.”
Last week Punxsutawney Phil, possibly the world’s most famous groundhog, did not see his shadow. If the legend is to believed, that signals an early arrival of spring and the end to what has been a challenging winter. There is no doubt that Villanti and district bus drivers hope that the groundhog is right.
School closings may be found at Philipstown.info. Click the Emergency button on the top menu and then click School Closings.